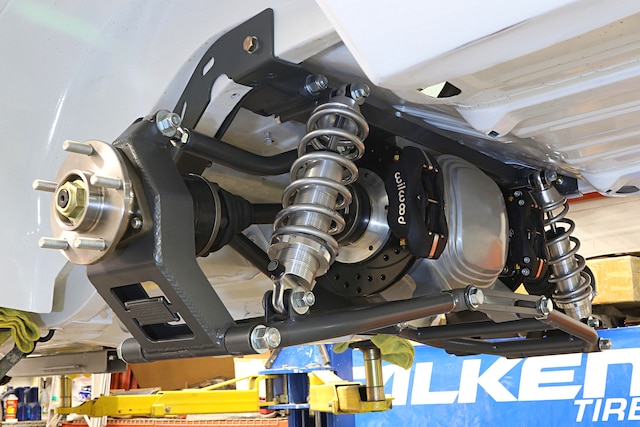 We love our classic Chevys. But let’s be honest, compared to today’s modern Chevrolets our classics—in stock form—don’t ride or handle all that great. To be fair, they are rolling on 50-year-old technology, but our daily drivers have gotten us a bit spoiled. Enter the aftermarket, where companies are noodling out how to make our classics ride and handle like their 21st century cousins. Heidts is one such company and they’ve figured out a way to graft an independent rear suspension (IRS) to some of our favorite Chevys. Best of all, it can be done with minimal fabrication. We’ve seen Heidts’ Pro-G IRS system in action at our Muscle Car Challenge events and were impressed with how the cars handled while still retaining excellent road manners.

The reason that nearly all modern cars use an IRS is that it’s simply better than a live axle when it comes to handling. In terms of ride comfort and overall driving, it’s superior at dealing with turns and uneven road surfaces. A live axle (also called a solid rear axle, or SRA) means that whatever one wheel does it affects the other wheel. So when one hits a dip in the road or a pothole then the other wheel is forced up, resulting in less downward force and hence less traction. Also, with an SRA there’s no way to make camber or other suspension adjustments (aside from some high-end track-prepped SRA floater kits). This ability for the IRS systems to let the wheels work independently (hence the name) along with the additional suspension tuning, makes the IRS a hard system to beat. An IRS will have greater unsprung weight, and by necessity it will be far more complex compared to an SRA setup, but if done right an IRS system will outperform an SRA in all handling and road driving situations.

The Pro-G IRS kit from Heidts that we’ll be looking at is for first-gen F-bodies, but it’s offered for other Chevys as well. As we said, it’s a bolt-in deal and only requires some drilling and a small notch in the rear framerails if you want full articulation on a lowered car. They have quite a few options to fit your power and performance needs and the upper link of the system produces less than 0.5-degrees of camber curve at 3/4-inch of total travel. And again, you can dial in rear camber and enjoy the other benefits of an independent rear suspension. So follow along as we bring a classic ’67 Camaro into the modern world of performance handling.

1. Now this is what we call a clean slate. Our ’67 Camaro had just been painted white and the underside was as nice as the top. If you’re starting with a complete car you’ll need to drop out the stock rearend and suspension bits. Also, the Camaro had a slight mini-tub on it, but the framerails were unmodified.

2. First up were the two main frame saddles. On a ’68 or ’69 Camaro these are located using the four weld nuts in the frame.

3. On our ’67 there are no weld nuts in the frame so the rear edge of the saddle was placed 25 inches from the center of the rear leaf spring shackle mount in the frame. We used a dead blow hammer to make sure the saddle was fully seated against the bottom of the framerail.

4. We then drilled 1/2-inch holes through the factory framerails using the saddles as templates. This is a bolt-in system, but there’s no reason you couldn’t weld the saddles to the frame if you were so inclined.

5. Three 1/2x3.5-inch bolts locked each frame saddle in place. The rest of the kit keys off of these brackets so getting them on right was critical.

6. Another key player in this IRS system is Heidts’ cast-aluminum centersection, which we had powdercoated silver.

7. To prep the centersection we added the 10 2-inch threaded studs for the third member and 5 1 1/2-inch threaded studs on each end (leaving 7/8-inch protruding) to support the stub axle retention/caliper brackets. We also installed the sintered bronze breather vent in the top of the unit. This was also when we tapped in the axle seals.

8. The top crossmember bolted to the top of the housing using four 1/2x2.5-inch bolts torqued to 75 ft-lb. There’s a hole in the crossmember that we made sure lined up with the vent we installed earlier.

9. Jon Lindstrom (left) and Justin Smith of Superstition Restoration in Mesa, Arizona, then used a Harbor Freight tranny jack to lift the assembly into place. The trick is to attach one side and then swing the other up and into position.

10. Note the two bolts installed with the threaded ends facing rearward. These have to be in the brace before it’s installed since there’s no room to slide them in once the crossmember is fully in place. They will eventually be used to support the tops of the coilover shocks.

11. We could then install the Heidts-supplied 9-inch 31-spline third member into the housing. They have several options available from budget to aluminum cases for those looking to shed some weight.

12. The caliper plates then went onto the ends of the IRS housing so we could check for fitment. They are two-piece deals so they can be installed with the stub axles in place (they retain the axles).

13. The pinion support plate was then mated to the third member using the new, longer, hardware to attach it to the five pinion bolt locations.

14. A support tie bar was then added forward of the pinion support plate we previously installed. This tie bar was bolted to the frame saddles we installed in the beginning of this project and they help stiffen up and fully support the IRS system.

15. Here’s a better view of how the tie bar tied into the frame saddles.

16. The 31-spline stub axles came ready to rock with the bearing already pressed into place. The longer of the two axle stubs is for the passenger side.

17. After applying a small amount of white grease to the splines and the seal areas of the stub axles we removed the caliper plates and slid them into the housing until the bearing bottomed out. The caliper plates were then reinstalled to lock the stub axles in place. The notch in the flange made it easy to tighten the six Nyloc nuts. We didn’t use one, but Heidts does offer parking brake options.

18. These are the fabricated outer uprights for the Heidts Pro-G IRS system. We should note that the Heidts parts came in raw steel, which we addressed by sending the parts off to the local powdercoating shop.

19. Three socket head (12mm) bolts secured the sealed outer bearings to the uprights and were torqued to 65 ft-lb. We also dabbed the bolts with a little thread locker just for peace of mind. The bearing hub was a tight fit to the upright so we used the three bolts draw the bearing and upright together.

20. And here’s the upright mated to the lower control arm using a 5.5x10.5-inch bolt with washers.

21. The two lower control arms were bolted to the centersection as shown. A tie bar bridged the area between the rear driver and passenger side lower control arm mounts, adding more strength to the system.

22. Pulling back a bit you can see how the assembly is attached to the centersection of the IRS system.

23. The Heidts Pro-G IRS system came with a pair of high-horsepower halfshaft assemblies. Anyone who has worked on a newer Corvette or Camaro will find they look pretty familiar.

24. The rotors were bolted to the hats using 5/16x3/4-inch button head crews and 5/16-inch split lock washers. We used red thread locker and torqued them to 180 in-lb. The Wilwood rotors came fully coated so they will keep looking good once in use.

25. The rotor assemblies were installed on the CV joints with the recessed side of the rotor assembly on the stub axle. It was fully secured, using thread locker, with 7/16x1 1/4-inch Grade 8 bolts and lock washers. We chose this method, but you could also install the outer end of the halfshaft into the upright and then the inner end onto the stub axle.

26. Before installing the upper links we inserted these rod end spacers onto both ends of each link.

27. This was definitely a two-person operation. We swung the upright up, catching the halfshaft on the way up and wiggling the halfshaft a bit until the splines slid into the sealed bearing. The halfshaft was then secured to the bearing hub using the large nut that was torqued to 100 ft-lb (Heidts advises to not use an impact gun for this). At the same time we connected the top of the upright to the main crossmember using the upper links (with the rod end spacers installed). The short end of the upper link went toward the upright.

28. We could then install our coilover assemblies (Heidts single-adjustable shocks with Viking 350lb springs). If you don’t have your shocks yet you can fabricate temporary links 12 inches long, which is the recommended ride height for the axles to be level to the ground.

29. To finish up the brakes we installed the Wilwood calipers onto the mounting plates with the 3/8-inch Grade 8 bolts in the kit using the supplied washes and shims to make sure everything was lined up. The caliper bolts were snugged to 20 ft-lb, and we used a dab of thread locker.

30. The result is a completely bolt-in IRS system that completely modernized our ’67 Camaro.

31. If you’re going to run your Camaro really low, or drive it really hard, then Heidts advises that you notch the frame out (you can see the semi-circular notch in the framerail saddle bracket) to give the upper links more room to articulate upward.

32. The shipping company lost one of our boxes, which contained the last part of our IRS system, so we’re going to wing it a bit. The subframe connectors tie the rear points of the front subframe to the rear framerails. This greatly enhances the stiffness of the Camaro, but more importantly it provides mounting points for the forward strut rods. The strut rods provide more strength to the IRS system and are critical for dialing in the system’s geometry as well as preventing wheelhop for better forward acceleration.