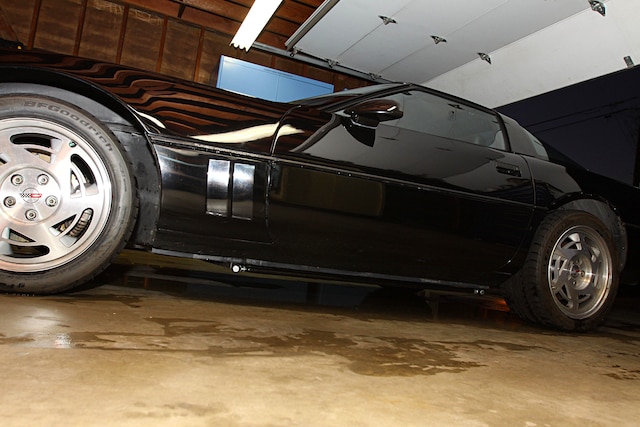 The C4 No Flex kit from Vette2Vette looks simple enough that an offshore knock-off artist could reproduce a reasonable facsimile, but a counterfeit kit couldn’t be installed as easy, or work as well. An observation we formed after this installation was completed and the car road tested. The C4 No Flex kit installed easily with every bolthole lining up perfectly and the mounting brackets fit right into place. There was not one snag from start to finish.

But before clarifying why a cheap knock-off wouldn’t be as good, allow us to explain what motivated the upgrade. The C4 is recognized as the first modern Corvette, yet it still has traces of its primitive forebears. The C4 was a respectable transition series into the modern Corvettes that followed, but the C4 did have growing pains. Amongst C4 owner’s complaints were the squeaks, creaks and darting over road irregularities brought on by its Targa top, as opposed to the more rigidly enforced T-top of the C3.

Dave McLellan, Corvette Chief Engineer from 1975-’92, was quoted as saying his design staff originally intended the C4 as a T-top car with a “T-bar roof connection as a structural member.” Then, future GM President Lloyd Reuss (1990-’92) specified the C4 should have a Targa top. Reportedly, this directive came down late in the production cycle and meant the C4 was released with a frame that liked to flex in the middle. (It’s interesting to note that Reuss was instrumental in returning a Corvette soft-top convertible to the 1986 model year lineup.)

The good news for 1986-’96 C4 owners is there’s a direct bolt-in aftermarket solution designed by Gordon Killebrew; Vette2Vette products calls it their C4 No Flex kit. It’s a frame stiffener bar system that puts the framerails in compression, not allowing the framerails to flex under load. In 1986, when the soft-top convertible was added to the lineup, Corvette engineers devised an X-brace to beef-up the framerails. A major drawback of the factory X-brace is it hangs lower and requires removal to access the underside of the drivetrain.

The subject vehicle is my triple-black 1990 Z51 with a little over 75,000 miles. I bought the car in Santa Barbara, California, from a guy that lived right on the beach. He bought an old Porsche and let the Corvette sit in his driveway for a few years. The ’90 C4 looked pretty rough, deteriorating rubber and cracked fiberglass from hit-and-runs perpetrated by fellow Santa Barbarians. I didn’t care to take it out for a test-drive because I was going to pass on the deal but the seller insisted. That drive changed everything. The car drove incredibly tight, just like a brand-new 1990 Corvette, including the expected squeaks, rattles, and creaks. My last Corvette was a much more primitive 1959, so I didn’t really mind, but as time has passed I’ve decided to upgrade the Z51 to behave as civilized as possible.

The results after installing Vette2Vette’s C4 No Flex kit were immediate. The irritating noises the car had driving over the speed bumps pulling into Vette’s tech center were completely gone, and the gains in handling are readily apparent when accelerating hard into the turns. Vette2Vette stands behind its C4 No Flex kit saying, “We guarantee that you will like our product. If not we will refund your money.”

1. Every nut and bolt necessary, plus the Heim joints, to install the C4 No Flex kit from Vette2Vette is included. Important! The C4 No Flex kit should be installed with the weight of the car on the wheels.

2. Ready to install right from the box, the mounting brackets and bars arrive powdercoated in a deep gloss black finish.

3. It’s a good practice to ensure the threads aren’t buggered and are free from excessive rust. Our first step was to spray penetrating oil into the boltholes.

5. As a starting point to mount the bars, thread (screw) the Heim joints into the bar halfway. Note, there is a righthand and lefthand threaded Heim joint for each bar.

8. Install the rear mounting brackets by removing the lower bolts (one per side) from the spindle rod brackets.

9. Note, the driver-side emergency brake cable needs to be unbolted and temporarily moved out of the way for the C4 No Flex kit mounting bracket to fit.

10. Bolt the C4 No Flex mounting bracket in place but only tighten the bolt just enough to hold it in place and parallel (align) to the framerail.

11. Then, use a 27/64-inch transfer center punch in the bracket hole to mark where a 7/16-inch hole must be drilled. Remove the bracket and drill the hole.

12. Reinstall the bracket and torque the 3/8-inch diameter bolt to 50 ft-lb and the lower spindle rod bracket bolt to 80 ft-lb.

13. Raise the rods into place and turn Heim joint inward or outward to align the Heim joint hole with the mounting bracket hole in order to insert 5/8-11 bolts.

14. Once the rods are centered with an equal length of thread exposed on the front and rear Heim joints torque the 5/8-11 bolts to 80 ft-lb.

15. Marking with a piece of blue masking tape made it easy to keep count how many revolutions the bar was turned to increase the load (tension) on the C4 No Flex kit.

16. Twisting (tightening) the bar by hand works at first but a 23mm open-end wrench must be used on the flats to tighten to full tension.

17. To adjust to one’s personal ride preference, remove the Targa top and measure from the windshield header to the halo. Next, jack the car up with the wheels suspended in air and take the same measurement. When the C4 No Flex kit is properly adjusted these measurements will be the same. Once that is the case, lock the Heim joints in place.

18. In this instance, the emergency brake cable (driver-side rear bracket) maintained a more graceful bend by not reattaching to the stock support bracket.

19. After Vette2Vette’s C4 No Flex kit was installed the hood and doors could be opened or closed with the car jacked up, and with or without Targa top installed.

In the late ’80s Corvette product planners asked, “What else could we do with the ZR-1?” ASC designed a 1990 Spyder-version of the ZR-1 in response.

A photo-illustrated step-by-step tech article on how to replace 1984-1996 Corvette C4 outer window seals with ease.

» Read More
1990 CERV III Corvette: The “Finished” Corvette Indy, But Not the Next Vette

This 1990 CERV III Corvette was labeled as the "finished" Indy. See why this concept didn't make the cut as the next Vette.

It wasn’t until 1990 before true supercar performance returned to Corvette powertrain offerings. Read about the Hellcat connection with the C4 Corvette.

Is there a lower mileage, better kept 1990 Chevrolet Corvette ZR-1 in the world? Probably not. Zimmerman says the tires still have their original air.

More than 9,000 miles away in Sydney, Australia, Murray and Wendy Forman share a burning passion for the Corvette in their "Down Under Dream Garage" collection.

This month's The 'Glass Menagerie is highlighting some of our readers' rides like this 2013 Chevrolet Corvette C6! "Back home in Wisconsin, we saw this one at our local dealership and bought it. It had just 8 original miles on it at the time."