The right way to modify your leaf spring shock mounts 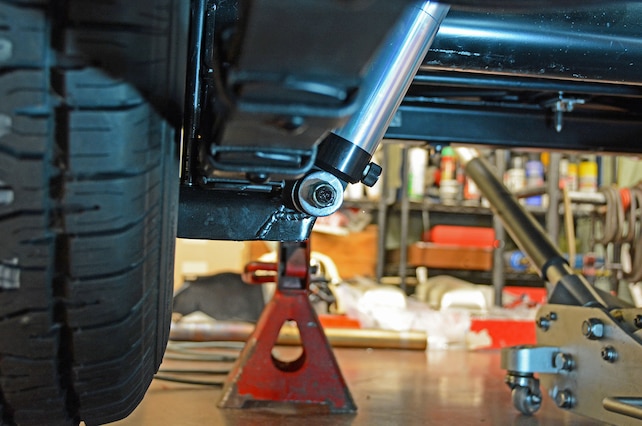 The famous proverb, “Necessity is the mother of invention” sure rings true in hot rod circles. We recently ran into a problem with a monoleaf spring on our 1960 Corvette and decided to switch back to the original, stacked leaf spring style. We ordered the new springs and longer U-bolts and upon their arrival we set about installing the new springs. While this modification was done on an early Corvette, the technique involved will work on any early Chevy.

The actual spring installation is a simple matter of safely supporting the rear of the car by the chassis to unload the springs. First, we removed the sway bar as it mounts to the lower spring plate on the early Corvette. Next, we unbolted the shock absorber from the lower spring plate and removed the four nuts from the U-bolts. Only unbolt one side at a time as that prevents the rear axle housing from rotating and allows you to leave the driveshaft in place. After jacking up the rear axlehousing just off the spring we removed the front spring eyebolt followed by the rear shackles. The new spring was installed starting with the front bolt, rotating it up to connect the rear shackle and then the housing was lowered back down onto the spring with the spring center-bolt properly locating the axle spring pad. The U-bolts were dropped over the axles, the lower spring plate/shock mount went under the new spring and then the four bolts were tightened.

When we attempted to reattach our QA1 adjustable shock the shock absorber wasn’t long enough. The new stacked spring had effectively lowered our shock mount almost 2 inches. There were two straightforward options to fix this dilemma. One, order a new set of adjustable shocks that cost money. Two, modify the lower shock mount, which takes a little time and talent. A famous quote from an old hot rodder came to mind, “Time I’ve got, money I don’t.” Since our QA1 shocks were virtually brand-new, we went with the second option.

As it turns out, modifying the lower shock mount is a fairly simple exercise in fabrication. It only required a piece of 5/16-inch flat steel, some cutting and welding skills, and a little math. The Pythagorean theorem tells us the hypotenuse of a right triangle is easy to figure, which makes relocating your shock stud 2 inches higher on the diagonal easy, or you can use a tape measure held on the correct diagonal. We cut the original shock stud off the plate, moved it up the required distance, and tack welded it in place. Certain the location was correct, we cut a triangular piece of 5/16-inch steel and fit it between the shock stud and the spring plate and then went about filling the voids from the cut. That was the basic plan but following along with the photos is a much better way to see exactly how we raised the shock stud.

Since this is a structural piece, quality welding is imperative. Generally speaking, to achieve proper penetration on a butt joint on metals thicker than 1/8-inch requires setting a small root opening in combination with a groove angle. While we used a Miller MIG welder to initially tack the two pieces together, we prefer to TIG weld the final butt and tee-joints on structural pieces.

The end result was a sturdy shock mount that now positions the shock stud above the bottom of the spring, making for a cleaner view from the rear of the car. While we did this out of necessity, if you are building a car you may consider the same approach for a cleaner look. The shock travel is back to the proper place and the entire project was done one Saturday.

01. After swapping out the rear springs on our 1960 Corvette we had to either purchase new shocks or raise the lower shock mount. We opted for the latter.

02. We replaced monoleaf springs with stock style, stacked springs. Since the lower shock mount is on the bottom spring plate this change effectively dropped our lower shock mount roughly 2 inches, as seen here.

03. The first step to raising the lower shock-mount is to remove the corner of the spring plate that holds the shock stud.

04. A port-a-band saw makes quick work of removing the corner of the spring plate.

05. Our initial cut left the lower edge of the spring plate with an irregular shape so one more trimming was in order with the port-a-band saw.

06. What once was one is now two. Next, we must locate the shock stud 2 inches higher.

07. Using the lower line of the spring plate as a guide we measured up diagonally 2 inches and clamped the two pieces to our welding table.

08. We used a Miller MIG welder for the initial tack-weld, the remainder of the welding will be handled by our Miller Syncrowave 200 TIG welder.

09. Here are the two pieces tacked together. We slid under the car and bolted them in place to be certain the stud was high enough. The shock absorber should have at least 1/2-inch of travel left when the rear springs are completed relaxed.

10. Simply welding the stud to the corner of the spring plate would fall way short of the required strength. A rear gusset is required and we cut this one out of a piece of 5/16-inch flat stock.

11. The rear gusset reinforces the shock mount all the way to the outer edge of the stud and almost to the center of the spring plate. Notice all the welding joints have been ground clean.

12. Next, we cut a filler piece to fill the void under the shock mount, once again using 5/16-inch steel. Note the small gap known as a “root” between the pieces, along with a slight bevel on the edges. This ensures good weld penetration.

13. Certain the stud is square to the spring plate you can perform final welding. Notice we also cut the top right corner off the shock mount for a symmetrical look. Both sides of the gusset and the fill piece were TIG welded.

14. After a couple coats of semi-flat black the bracket could pass for a factory design. The welds could be ground smooth, but in a no-show case like this we prefer to leave structural welds unground.

15. And here’s the finished product. Our QA1 shock is mounted high and out of the way for a very clean look. The cost of one Saturday modifying mounts is a small price to pay to reuse our brand-new shocks.