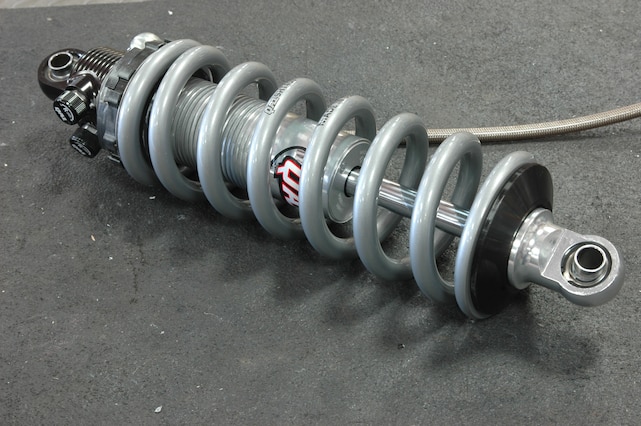 With our new Street Shop chassis stiffened up with a four-point rollbar and equipped with a C7-based suspension setup, we’ve got a solid foundation to keep Scarlett, our 1972 coupe project car, firmly attached to the pavement during spirited driving. This brings us to the shocks and springs, which are a critical element in making sure all that stiffness and improved geometry gets put to good use.

While the original C3 design used a transverse steel leaf spring mounted separately from the shocks, most modern performance cars use coilover shocks instead. The idea of coilovers is simple: combining the shock (which controls the speed at which the suspension operates) and the spring (which holds the car up) into a single unit lets them both operate more effectively. While the front shock in a factory C3 setup already sits inside the front coil spring, the coilover takes it one step further where the spring is mounted directly to the shock itself, generally with spring perches mounted to the body of the shock, which is threaded to adjust ride height and stiffness. Unlike the MacPherson strut system, which also uses a spring and shock mounted together, we’re still using the factory A-arm style suspension with the coilover shocks.

Ride height isn’t the only thing adjustable on QA1’s new Quad Adjust coilover, to which we were first introduced to by Van Steel last year at Bloomington Gold. As the name suggests, the Quad Adjust allows easy tuning for four other areas of the shock.

Like springs, shocks do two things: they compress (also known as “jounce”) and they expand, which is called rebound. The popular single-adjustable shock typically has one knob that either stiffens or softens both the compression and rebound strokes of the shock. Double-adjustable shocks allow you to adjust each function separately. The Quad Adjust, however, allows you to adjust both compression and rebound at two different speeds: low speed and high speed, which refers not to the speed at which the car is traveling but the speed at which the shock is being used. While low speed includes things like slowly building up cornering force (read: performance driving) or going over a dip in the roadway, high speed involves hitting a pothole or an expansion joint on a bridge, the sort of experience that can make a stiff car quite unpleasant to drive on the street. In addition to the knob-adjustable high speed/low speed compression and rebound, the Quad Adjust also has a Schrader valve in the top of the remote reservoir, concealed under a red anodized cap. Unscrew the cap, and you can access the valve (the same sort of valve that keeps air in your tires) to adjust the nitrogen pressure level in the shock, which lets you change the nose pressure in the shock (special tools may be required). All in all, an exceptionally versatile package, especially important for cars like Scarlett that are intended for both road and track use.

In addition to the shocks themselves, QA1 provided springs (450-lb. front, 650-lb. rear, both in 9-inch heights) as well as a pair of their billet flat panel mounts for the reservoirs of the front shocks and rollbar mounts for the rears. They also included a set of roller bearings that go between the spring and the spring perch, which makes turning the two adjustment nuts against the force of the spring much, much easier.

Both front and rear shocks came with bearing mounts, top and bottom. On the front, we had to replace the lower bearing with a T-bar mount to fit the C7 shock mount on the lower control arm. Since no bearing was available that was large enough to fit the 3/4-inch T-bar required, we had to replace it with a bushing setup we installed using a manual press. On the rear, we removed the lower bearing mount and installed the shock into Street Shop’s billet aluminum lower shock mount.

Assembly is easier than you think: not counting swapping out the bearing for a T-bar, we were able to get the spring and perches on the front shock installed in about 6 minutes. For the rear, dropping the upper A-arm, removing the shock already in place and then assembling and reinstalling the coilover took around 30 minutes or so. Word to the wise: it may be possible to work the shock into place without disassembling the suspension, but it’ll take a lot more time. On both front and rear, we unbolted the upper A-arm from the frame and were rewarded with all the room we needed to get the job done quickly and without forcing anything.

Once the shocks were installed, we also had to install the reservoirs, which are plumbed to the body of the shock with –AN type braided stainless lines and banjo fittings, which allow good freedom of movement to orient the reservoir for mounting. In our case, we test-fit the shocks and reservoirs with the body in place to make sure there was adequate room to mount the reservoir and still be able to adjust them once the car is fully assembled. After that, a quick body pull gave us lots of room to work with.

01. A front QA1 Quad Adjust shock assembled: only the lower bearing mount needs to be changed prior to installation. Note the two rebound adjustment knobs: the two compression knobs are on the remote reservoir, which is plumbed to the body of the shock via the braided steel line in the upper part of the photo.

02. Here’s a close-up of the low-and high-speed compression adjustment knobs on the reservoir (the rebound knobs are on the shock itself). While the shock can be bolted directly into place, you’ll need some kind of bracket to mount the reservoirs.

03. Technically speaking, this a fifth adjustment. The covered Schrader valve allows the user to adjust the pressure of the nitrogen with which the shock is charged. It’s protected by the bright red anodized cover that screws into the reservoir, covering it.

04. We had to remove the lower bearing mount from both the front and rear shocks. Easier done than described, we inserted a round tool into the bearing mount and put a wrench on the jam nut holding the mount in place, and unscrewed it off the end of the shaft.

05. With the bearing mount removed, Ted Whitney used a cutting wheel to slot the end of the shaft on the two rear shocks prior to installation in the lower shock mount.

06. The end of the shaft with the slot cut into it. The threaded portion screws directly into the billet lower shock mount. For our application, the slot is critical. Without it, there’s no way to remove the shock from the mount without trying to clamp the shaft to keep it from turning, a sure way to damage both the shaft and the seals.

07. The black anodized lower shock mount, machined from billet. Note the spring perch at the top of the mount; the slight radius kept us from being able to use the roller bearings on both the top and bottom of the spring, as it requires a square surface in order to seat properly.

08. The lower spring perch and the jam nut that holds it in place shown with their respective adjustment wrenches, which you’ll want. Check the directions before installation, as both the perch and nut have an “up” and “down.”

09. The roller bearing set, which consists of a top and bottom washer and the roller bearing (also known as a Torrington bearing) in the middle. Adjusting spring height is far easier when you’re not working against the friction between the spring and its perch.

10. The threads on the body of the shock must be treated with Permatex Anti-Seize prior to assembly; this protects the threads from damage when the spring perch and jam nut are tightened up. A little goes a long way, and it’s got a tendency to get on everything when you’re working with it, so be careful.

11. The roller bearing in place on the spring perch, also well-lubed with Anti-Seize. We hit the washer below it and the one that will go above it, as well as the bearing itself with Anti-Seize, as the instructions directed.

12. Installing the T-bar in its bushing in the lower shock mount. It’s held in place on either side with a C-clip, and we used this press to install them. Once it was together, we just screwed the mount and jam nut into place on the threaded end of the shaft where we had removed the bearing mount.

13. The top of the front shock installed in its mount, showing the bearing mount. Also note the machined spacer: We installed it toward the rear to orient the shock as close to vertical as possible. Now it’s time to mount the reservoir; you’ll want to make sure you’ve got the braided steel line oriented correctly before you tighten up those upper mounting bolts.

14. The reservoir shown with the two well-machined panel mount brackets from QA1. Note the brackets have two sets of holes in the mounting ears so they can be installed either parallel or perpendicular to the surface to which they are mounted.

15. After deciding to mount the bracket vertically to the frame between the upper control arm mounts, we clamped it into the mill vise and machined a .100-inch step into the bracket to help locate it properly. We also shortened the part of the ears we didn’t need and opened up the remaining mounting holes just a bit.

16. The only part more fun than drilling the 3/8-inch plate steel for the front brackets was tapping it for the 10-32 machine screws we used to mount them. Thanks to the location of the upper shock mount, the rearward hole had to be tapped from the inside as there was simply no way to get a tap and tap stock lined up with the hole.

17. The front reservoir in place in its billet mount. It’s unobtrusive, but still easily accessible from under the hood. Also note the mounting knobs on the shock itself: we mounted the shock upside down to keep everything close.

18. It’s unwise to leave anything loose to flop around under the hood of a car. Once the reservoirs were mounted, we routed the braided steel line close to the frame and clamped it in place.

19. Tray Walden test-fitting a rear reservoir to the rollbar diagonal directly behind the driver’s seat. The 1 3/4-inch ID rollbar mount was a bit snug due to the powdercoating, so once located on the bar, we tapped it down onto the bar with a rubber mallet and then screwed it firmly in place.