1969 Nova Suspension Rehab with Parts from Performance Online and QA1

In Handling We Trust: A 1969 Nova gets a suspension rehab 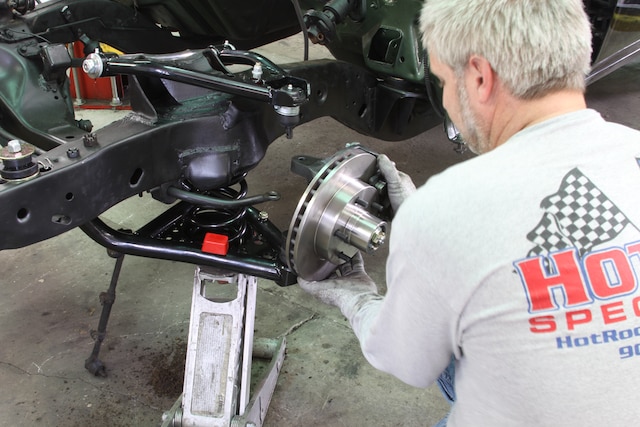 Pay now or pay later. It’s an axiom that’s true about many things in life, but it’s a perfect way to describe the process of buying a classic Chevy. If your wallet is fat you can buy a super nice example of your favorite ride, but if you’re short on cash then you typically have to settle for a rougher piece as your starting point. That was the case with Joel Rode and his 1969 Nova. He didn’t have the money to buy a cherry example so he bought what he could afford and decided that getting the car back into shape would be half the fun. Of course, you tend to find more problems as you dig deeper into any budget buy, but that’s just part of the adventure.

In addition to a wheezy engine and body rot, the Nova suffered from a worn-out and just plain tired suspension. Sloppy ball joints conspired with dry-rotted bushings to rob the Nova of any handling prowess it might have once had. So, first on the list for Joel was to get a few new parts under the Nova. To keep his check ledger happy, he went with some of the wallet-friendly options at Performance Online (POL). Their mix of suspension and brake parts would get his Nova on the road to recovery and, since quality shocks are critical for crisp handling as well as a good ride, he chose some pieces from QA1.

01. Behold the old Nova suspension parts. Just your garden-variety stamped-steel factory parts with worn-out bushings. The brakes worked OK, but the calipers seeped fluid and the parts were worn.

02. After loosening the upper castle nut, Joel Rode, owner of Hot Rod Specialties, used a fork to pop the ball joint pin free of the spindle.

03. Next up was dropping out the stock shock.

04. Coil springs contain a fair amount of energy so care must be taken when removing them. The easiest way we’ve found was to use a floor jack under the lower arm and, after fully removing the castle nut on the upper ball joint, slowly lower the arm until the tension in the spring was released.

05. And this was the spring we found. It looked like someone did the backyard lowering technique of heating up the spring and then jumping on the hood.

06. With all the old parts off it was the perfect opportunity to clean up and paint the areas we couldn’t reach before.

07. The front control arm kit (PN TCA-U6874P) from Performance Online (POL) is a great and affordable way to upgrade a front suspension. In addition to looking a ton better, the tubular steel design is far stronger than the factory arms. The upper and lower control arms came pre-assembled with new ball joints and Delrin bushings. Note that the controls arms won’t work with front drum brakes.

08. Here’s a comparison of the POL (left) and the factory upper control arms. The tubes on the POL arms are made from large-diameter 1020-DOM tubing and feature geometry improvements to help with camber angle issues common with lowered cars.

09. With no fenders or engine in the way, installing the upper arms was about as easy as it gets.

10. Like the upper arms, the 1.5-inch steel tubing used on the lower arms (PN TCA-L6874D) offers far less suspension deflection compared to the stamped-steel and rubber-bushing stock arms. The powdercoated arms came assembled with ball joints and Delrin bushings. In terms of geometry, these offer an extra 4.0 degrees of caster and an improved camber curve.

11. Instead of servicing our old brakes, we opted to replace the parts with a disc brake kit from POL (PN CBKD6874). The main reason for this was to utilize their 2-inch drop spindles since they are the best way to lower a car. We went with the solid rotors, but POL does have slotted and drilled options. The kit came assembled and included bearings, grease caps, seals, spindle nuts, and new rubber brake lines. For $50, POL will upgrade the lines to braided stainless.

12. We slid the new POL 1.5-inch drop coil springs (PN FCS638D) into place and then lifted the lower control arm. The floor jack was then slid under to hold it in place.

13. By using the jack, we were able to raise the lower arm up until the upper ball joint in the new tubular arm passed through the top of the spindle where it was secured with a new castle nut and cotter pin.

14. This was also a great time to replace all the worn steering parts under the Nova with fresh tie rods, adjusting sleeves, and an idler arm from POL. These parts are offered individually or in a kit, depending on what your car needs.

15. Of course, ditching the tiny front sway bar was on the list since a larger bar helps control body roll and improves cornering. The larger POL bar (PN PO599U) measured out at 1 1/8 inches in diameter and is made from 4140 heat-treated steel. The black powdercoated bar came with new bushings.

16. Joel’s Nova is just a street cruiser so he wanted nice shocks that wouldn’t bust his budget but still improve handling and ride quality. The solution was a pair of QA1 non-adjustable 801 aluminum Stocker Star shocks (PN TN801). These are a direct replacement shock and have been fully dyno tested. They’re also rebuildable and revalveable by QA1.

17. The QA1 shock slid up through the lower control arm and was secured in place. Note that they just fit through the hole and that the single- and double-adjustable versions have a slightly larger diameter and would require some modifications to the arm to get the shock in place.

18. Included in our brake kit was this vacuum booster and master cylinder assembly. It came fully assembled with an 11-inch power booster, master cylinder, proportioning valve, valve bracket, and proportioning valve lines. The booster can be ordered in 7-, 8-, 9-, or 11-inch versions. For a few more dollars you can get dual-diaphragm versions of the 7- and 8-inch boosters. Most people run the 11-inch, but keep in mind that if billet hood hinges are in the equation, they might hit, so a 9-inch or smaller booster would be needed.

19. The rear of the Nova was a mess. The bushings were shot, the monoleafs warped, and the shackles didn’t help either.

21. After supporting the rear with pole jacks, we removed the warped monoleafs and transferred over the forward leaf spring pocket brackets.

22. With the new POL leaf springs in place, we installed a pair of QA1 single-adjustable billet shocks (PN TS505). The adjustability will let us dial in the ride quality and maximize performance. And with that our suspension modifications were done and Joel was one step closer to getting his time-worn Nova back on the road.