How to Install Double-Adjustable Viking Shocks on a 2001 Camaro

Shock Therapy: Improve handling with a quartet of double-adjustable shocks 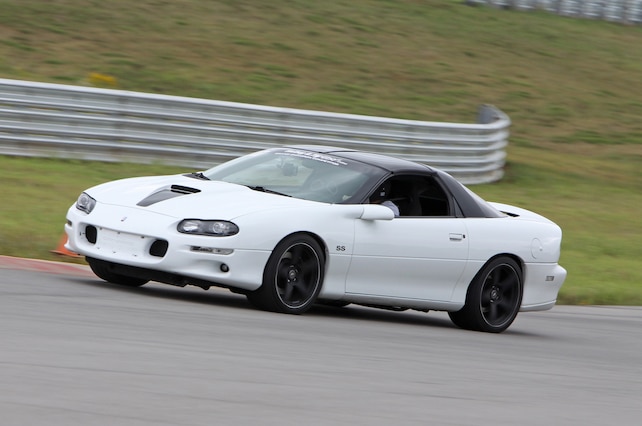 Even more so than tires, nothing affects your car’s driving personality more than shocks. They are what determine how your car handles, rides, and launches, and when they go bad, the whole car suffers. We’ve all seen the variations out there; monotube, twin-tube, single-adjustable, double-adjustable, triple-adjustable, and so on. The cost for shocks is as varied as the type, with prices ranging from around a hundred bucks to thousands of dollars for the exotic stuff.

Shocks are all about controlling the timing of a car’s suspension. The internal valving tells the shock how much resistance it takes to collapse (compression) and extend (rebound) the shock absorber. This is important since different vehicular activities demand different shock personalities, and that’s where adjustability comes into play. For example, a quality ride down the road would call for low compression and rebound settings while an autocross event would require the shocks to be set much higher for both. Shocks are even important in non-handling events like drag racing since they can greatly help with weight transfer for maximum rear tire bite. Here, the fronts would have high compression and low rebound, while the rears would be set to the opposite. Having adjustable shocks lets your car switch between street, handling, and drag just by turning a few clicks on the knobs.

Viking Performance has been around since early 2011, so they are relatively new players, but their team has over 50 years of hands-on experience in racing and performance aftermarket. They feel that their line of Warrior and Crusader double-adjustable shocks are a great balance of performance and cost. Their newest line, the Crusader, was designed for more serious hard-driving applications. As Viking Performance’s President Chris King relayed, “This shock was developed based on requests from the Pro Touring market and from small-tire, drag radial customers. With these vehicles, there are situations that require rebound forces in excess of what standard passive adjustable shock absorbers can provide. The other factor in our design parameters was that adjustable shocks, in general, are too complex for the average person to be able to rebuild and/or re-valve. From these requests, the Crusader was born. These shock absorbers have the same digressive compression valving, and various options thereof, as the Warrior line. As such, there are 19 positions of evenly spaced adjustments, the zero position and 18 distinctive clicks. The rebound valving, however, is a progressive valve that is strictly determined via orifice control. A progressive valve shock will have a softer low-speed force that ramps up very quickly as shaft speed increases.”

Within the Crusader line they also offer a Pro Touring option, which incorporates more adjustments and has much more aggressive compression settings. About the only thing you won’t find in their shock line are single- and triple-adjustable shocks. Why? According to Viking, a single-adjustable shock is too full of compromises and really doesn’t control compression or rebound very well. In regards to triple-adjustable shocks, it moves into an area that is way too complicated for your typical enthusiast to get right. In their opinion, double-adjustable, if done right, offers the performance driver enough control to really get their suspension dialed in without the expense and tuning hassles of exotic triple-adjustable shocks.

Late-model Camaros have a ton of handling potential, and at this point they’ve depreciated to the point where they are hot buys for those wanting to go drag racing or hit some open track days and autocross events. Such was the case with Tim Lee. Tim scored a sweet 2001 Camaro and he wanted to get it sorted out for his daughter to run in local autocross and drag events. Given two such polar-opposite activities, he wanted adjustable shocks that would be tuned for the automotive activity de jour. The Viking Crusader shocks, with the Pro Touring option, seemed like a perfect match for this given their wide range of adjustability. Soft for cruising, firm for autocross, or a mix of soft and firm for better dragstrip launches.

01. First up was getting the old parts out of the way. The top of the front struts are secured to the shock tower with four fasteners. On the passenger side there were two lock nuts (on studs) to the front and two bolts on the rear.

02. On the driver side there are two lock nuts on the front, but on the rear GM switched to Torx bolts. These can be tough to get to due to the brake master, but with the right socket and a swivel, we were able to remove them.

03. The bottom of the shock was then unbolted from the lower control arm and removed from the Camaro. The upper arm and plate will hang free since the assembly is held to the car by the four strut bolts.

04. We then removed the upper strut mount from the stock strut.

05. And here’s the factory upper strut mount attached to the Viking Crusader shock. The front springs had a rate of 550 pounds, are made in the USA, come in around 25 percent lighter than many other springs on the market, and carry a lifetime warranty to stay within 2 percent of their original free height and rate.

06. The bottom of the Viking shock attaches to the lower control arm the same as a stock strut, via a crossbar. Viking utilizes an upgraded bearing T-bar mount, which allows for misalignment and is a better overall solution since the weight of the vehicle is on stainless steel instead of polyurethane.

07. And here’s the assembly installed on the Camaro. Since the upper arm is moved during the install, we feel that getting an alignment at the end is a good idea.

08. Unlike the front of the Camaro, which used a coilover strut arrangement, the rear had a shock with a separate coil spring.

09. With the rear hanging, we were able to easily remove the coil spring.

10. To get the shock out, we had to pop the hatch and pull back the carpet and a small silicone cap. This revealed the nut (and bushing), which secured the shock to the car.

12. The lower bracket was attached to the factory shock mount with a supplied 1/2-inch bolt, nut, and washer. This told us where we needed to drill the 3/8-inch hole for the upper bolt. The torque spec for the upper fastener was listed as 35 ft-lb, while the lower bolt was torqued to 60 ft-lb. Spacers were included in case we were running relocation brackets, which we weren’t.

13. As Viking’s Chris King told us, “Don’t let definitions fool you, as these shocks can generate huge forces at low speeds depending on the needle and seat combination. In fact, the Crusader shock absorber produces forces far greater than nearly all other shock absorbers on the market. The rebound side has 22 available positions of adjustments, the zero position and 21 distinctive clicks. As a result, the Crusader line provides 418 different valving combinations. This needle and seat combination allows for a very large adjustment range. For example, our Pro Touring-specific valving has a range of 15 pounds to 850 pounds at 1-inch per second, 40 pounds to 2,000 pounds at 3-inches per second, and 120 pounds to 3,200 pounds at 6-inches per second. You will not find anywhere near this broad of an adjustment range with high-end monotube shocks.”

14. The rear Crusader coilover shocks, like the fronts, are double-adjustable. “Another important characteristic of the Viking shocks is that every click of the adjuster makes an actual change of the force output. While this seems like a no-brainer, there are many high-end shock absorber brands that do not change the force output until 12 clicks or more of the adjuster, which makes tuning on the car quite difficult. Another very cool feature to these shock absorbers is the interchangeable needle and seat design. The rebound valving adjustment range can be changed without completely disassembling the shock absorber. With the shock in a vice, on its side, in the fully extended position, the rebound knob can be taken off and the needle removed with basic tools, and the seat changed out with a flat-head screwdriver. There are no expensive or special tools required to be purchased from Viking. The process is similar to jetting a carburetor. Obviously, it is critical that everything be kept extremely clean, as we are dealing with small orifices. The end user can choose from a variety of progressive force ranges. Viking has developed application-specific valving for drag racing and Pro Touring, where high-force rebound is required. Multiple other valving ranges are also available,” explained King.

15. Viking includes thrust bearings with their kits to make adjusting the coilovers, when under load, easy as opposed to nearly impossible without them. The thrust bearing, in addition to the threaded portion of the shock body, received a coating of antiseize.

16. And here’s the rear shock assembled with the provided 150-pound springs. We made sure to install the jam nut with the lip facing up.

17. The top of the rear shock was then bolted to the UMI upper mount using the supplied Grade 8 hardware. Once in the car there will not be not enough room to insert (or remove) the bolt, so it’s necessary to do this off the car. The bolt was torqued to 60 ft-lb.

18. We then guided the bracket assembly up into the factory shock hole. Once in place we secured it (from inside the car) using 1/2-inch locking nut tightened to 60 ft-lb. The “ring” on the bracket indexes to the space previously occupied by the factory coil spring. This way the increased load of the new coilover system is spread out over a larger area.

19. The lower end of the coilover, with the adjustment knobs facing forward, was then swung into the lower bracket and secured with the included hardware and torqued to 60 ft-lb.

20. Lastly, we put the Camaro on the ground and started adjusting the ride height using a spanner wrench. We also began adjusting the compression and rebound. This was made much easier since Viking included some various starting points for cruising, handling, autocross, and drag race applications.

We upgrade the brake pads and rotors on our 2001 Chevy Camaro Z28, Black Betty, thanks to the help of Wilwood.