How to Get Better Handling for Your 2014 Chevy SS

Stop, Drop, and Corner: A Chevy SS gets a lot more performance with a few well-chosen parts 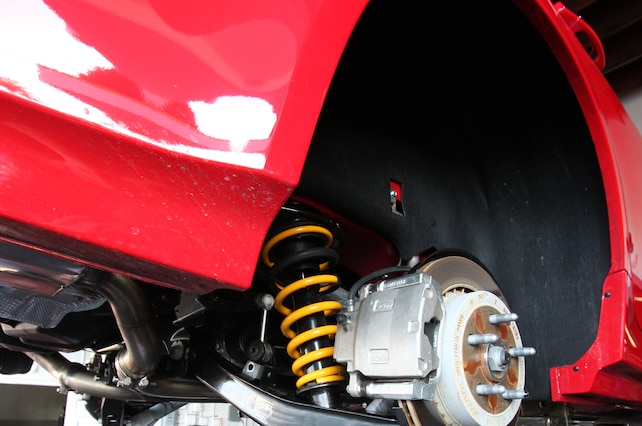 It doesn’t really matter how well a new car is built; to us there’s always room for improvement. Making good better and better best is just how we’re wired. Keep in mind that when GM churns out a performance car like the Chevy SS, their idea of “performance” is quite a bit different from how we perceive it. To a GM engineer it’s winding down a mountain road on factory rubber. They didn’t plan on superchargers, sticky tires, or driving ten-tenths on a road course. The net result is that parts and structures fine for a stock Chevy start to falter when the performance envelope is pushed past a certain point.

One area where improvements can be made is by swapping out key suspension and chassis parts. Remember, GM builds parts based on a car staying stock, and for this the stamped-steel suspension parts are fine. The problem is that they can’t cope with the higher side loading encountered during aggressive driving. When loaded, they have a tendency to flex, causing geometry changes, which degrades handling. In addition, the soft rubber bushings used by the factory to ensure a cushy, noise-free ride, deform and further rob handling prowess.

The goal here is to firm things up to keep the handling predictable but not create a car that rides like a floor jack. Also, while these parts were installed on 2014 Chevy SS, the same parts and install procedures work on a fifth-gen Camaro.

01. Here are the bits from Granatelli Motor Sports that will get our SS up to snuff in terms of handling. If they look familiar it’s because the Chevy SS and fifth-gen Camaro use many of the same suspension parts.

02. The stock rear suspension on the SS is fine for a stock car cruising the streets, but if harder driving is the plan, the stamped steel stuff just isn’t going to cut it.

03. It’s fairly easy to see how much stronger the new boxed, chromoly steel trailing arm (PN 500058) is compared to the stamped steel stocker. The big benefit is that caster settings won’t change under hard cornering, and also will help eliminate wheelhop. We went with the fluted, greaseable, low-deflection polyurethane (durameter 80) bushings that are far superior to the rubber OE bushings.

04. The trailing arm was a direct replacement for the stocker, which made installation a snap. A bit of grease on the poly bushings made sliding them into place easier.

05. The toe rod’s job is to hold and maintain the toe settings of the rear wheels, similar to how tie rods do it up front. When cornering, the stock toe links can flex up to 0.600 of an inch on either side, making it impossible for the rear tires to maintain a flat contact patch in the corners. Granatelli replaces the stock toe links with 1.25-inch chrome-moly tubing and greaseless rod ends utilizing a standard thread left and right thread design. This eliminates all flex and deflection, ensuring the contact patch stays true regardless of how aggressive the car turns. The new tubular toe links (PN 50056-A) are much stronger and employ rock-solid spherical ends. They are fully adjustable so the rear toe alignment angles can be easily dialed in. Like the trailing arms, they were a direct replacement for the stock parts.

06. GM loves their stamped steel. Again, items like this tunnel crossbrace are fine for the street, but under hard track driving they tend to twist out of shape. The stock seat box support provides virtually no structural rigidity however. It often flexes and bends like a pretzel in sharp corners and even going diagonal into a driveway.

08. Working in tandem with Granatelli’s G-Load Brace is their K-Member Support Bracket (PN 500072), also known as an A-arm Support. This bar triangulates and supports the front K-member, which reduces flex and helps to keep the front square. Think of it as an antisway or twist bar for the frame. By extending all the way across the front of the chassis it turns the “K” shaped crossmember into a reverse looking “D” shape. Oh, later we realized that the bracket was on backwards and that the flat, vertical side should orient toward the rear of the car.

09. Like all GM cars, the SS suffers from large wheel gaps. But like many things, it’s a problem easily solved with some cash and a selection of tools. Here you can see a stock height SS on the left and a dropped one on the right.

10. First up was popping the hood to get to the top of the strut towers. You can also get a peek at the Whipple supercharger that dramatically boosts the power output of the SS’s 6.2L LS engine.

11. We then unbolted the strut from the suspension and removed the assembly from the car.

12. The front spring is installed under quite a bit of tension, so a spring compressor was used. If you don’t have one, most suspension shops will help you out for a few bucks.

14. After installing the new springs on the stock struts, we once again used a spring compressor and reinstalled the assembly back under our SS.

15. The rear coilover shock assembly was unbolted from the top and the lower control arm.

16. Unlike the front strut assembly, the spring on the rear isn’t under nearly as much tension and can be carefully disassembled without a spring compressor. But, if you have one, use it.

17. To accommodate the drop, we trimmed about 2 inches off of the plastic dust sleeves on the rear shocks.

18. Here you can see the new spring assembly next to the stock arrangement.

19. The coilover assembly was then slid back into place and secured using the factory bolts.

20. Since we had the car apart, we took this time to upgrade the rotors to Granatelli’s high-performance versions. They start out with virgin Brembo rotors before they are heat treated. They cross-drill then slot them before going to heat treat and then douse them in either black zinc or silver zinc coating. Slotting helps to dissipate gas pressure buildup under hard and/or prolonged braking, while dimpling helps in the cooling effect to ensure a great pedal feel. Granatelli reports the stopping distance (60 to 0 mph) goes from a stock 105 feet to under the magic double digit of just 99 feet.

More Power For The Pavement

The Chevy SS is a big car, and as such it needs big power to get all that mass moving quickly. The best way to get there was adding some boost, but reliability was a key concern so the plan morphed into making the engine as robust as the rest of the Chevy. With that in mind a stock, stroked LS3 was ordered from Ken Duttweiler, of Duttweiler Performance, in Saticoy, California. Filled with forged internals, along with the right supporting parts, this engine should hold up to the floggings it’s sure to endure.

3. Duttweiler also spec’d out a COMP hydraulic roller camshaft that came in at 214/226 duration (at 0.050-inch) 0.595/0.605 lift and a 118 LSA, a Cloyes timing chain, and an ATI damper. This will give the engine excellent idle characteristics and still allow big power under boost.

4. The LS3 heads were left stock except for the addition of Manley valvesprings, retainers, and pushrods. A K&N intake kit helps with the air requirements. To help hold the heads down under boost ARP fasteners were employed.

5. In terms of ignition, the obvious choice was a set of PerTronix Flame-Thrower coils (PN 30838) …

Fitting a Modern, High-Performance Drivetrain in Your Early Chevy Nova

Our 1963 Chevy II/Nova project gets its new Schwartz chassis and we massage the sheetmetal to fit the new drivetrain.

With the help of the crew at Currie Enterprises, we knock out brake pad knockback with a floater rearend system from Baer.