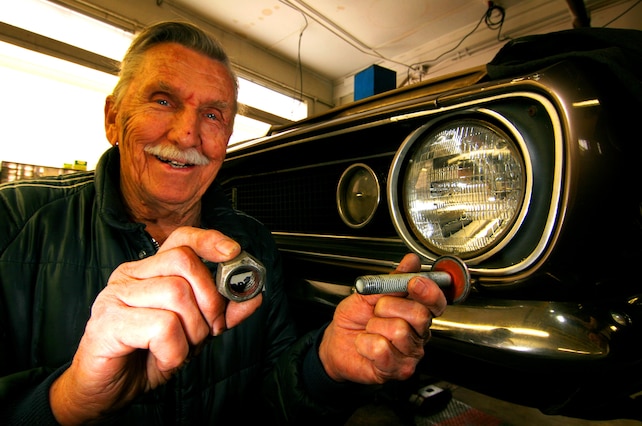 Dick Guldstrand was a hell of a racer and a pioneer in making slow cars really fast, and even though he passed away this year, he left behind a rich legacy of performance tricks that we can use to make our Chevys much faster around a track. The main one is his “Guldstrand Mod.” What Guldstrand figured out was the stock first-gen Camaro suspension didn’t allow for any camber gain under hard cornering loads. The lack of camber gain caused the tread of the front tires to lose contact with the asphalt, resulting in understeer. The GM engineers preferred understeer to oversteer for a passenger car since it’s safer for your average driver on the street. To fix this problem and increase the contact patch, the outside “loaded” tire needed some negative camber while the inside “unloaded” wheel needed to gain some camber on the positive side.

It seems crazy that simply drilling four holes and slightly moving the upper control arms can change how your Chevy handles, but it can — and it costs almost nothing to do. It’s all about geometry and even the smallest change to a suspension’s geometry has profound effects on handling.

Using the template designed by Dick Guldstrand you can lower the upper control arm pivot points by 3/4-inch. This raises the front suspension roll center from the factory set “below-ground-level” location to a point well above the road. This reduces the angle of the lower control arms and makes them more parallel to the ground, which nets a more favorable camber curve. The new holes have the added benefit of moving the top of the spindle rearward 1/4-inch from stock. This creates more positive caster, which makes the steering feel more “snappy,” aids in stability, and causes the steering wheel to return to center quicker.

1. This is the “magic” template that can improve your Camaro’s handling and let you keep your cash. It may look simple, but it took a lot of work to come up with these relocation points. We’re not sure what will become of Guldstrand Performance, but you can print this and use it to modify your Camaro. Just make sure it’s scaled properly.

2. With the control arm out of the car we could use the template. We carefully cut it out and slid it over the original studs. We then used a center punch to mark where to drill the new holes. A small 1/8-inch drill bit was used to make a pilot hole through the metal from the inside to the outside.

3. Using the pilot hole as a reference, we moved to the outside of the car and drilled a 7/16-inch hole. The metal was tough, so we made sure to use a high-quality drill bit.

4. With the holes drilled we removed the template and knocked out the old upper control arm retaining bolts. These were reused, so we made sure not to rotate them and strip the knurls on the shoulders. We also used a nut to protect the end of the bolt when we hammered them out. If you’re never going back to stock then you can cut away the top of the mounting tower (using the bottoms of the original holes as a guideline).

5. The rest was just reinstalling the control arms to their new location. We used new lock-nuts and torqued them to 50 ft-lb and then reassembled the ball joint to the spindle. Not rocket science, but did make sure the castle nuts were snug and the cotter pins were back in place. For the drive down to the alignment shop we put the same number of shims back in each location.

The Science of the Change

Our sister site, Car Craft, did an in-depth test of the Guldstrand mod and what they found confirmed that this simple mod profoundly changes the suspension geometry.

As Car Craft found, a 1967 Camaro Z/28 lowered 2 inches has terrible suspension geometry. The roll center is below ground level, giving neutral camber in bump (loaded wheel and tire) and negative camber in droop (unloaded wheel and tire). This is exactly the reverse of what you want in order to maximize the tires contact patch with the road and have better handling.

Here you can see what Car Craft was able to achieve by doing the Guldstrand Mod on the same 1967 Camaro. Lowering the upper control arms by 3/4-inch gave a good amount of camber gain. Also, notice that the roll center is now located above ground level and closer to the center of gravity (CG). The loaded tire will now get the desired negative camber while the unloaded tire will get positive camber. The initial static camber setting is zero, so that means good tire wear, which is a definite bonus. This modification also gives improvements to roll couple and roll center. The front geometry is far better and there’s less change throughout the suspension travel, which is exactly the desired result.