How To Repair a C1 Corvette Frame the Right Way 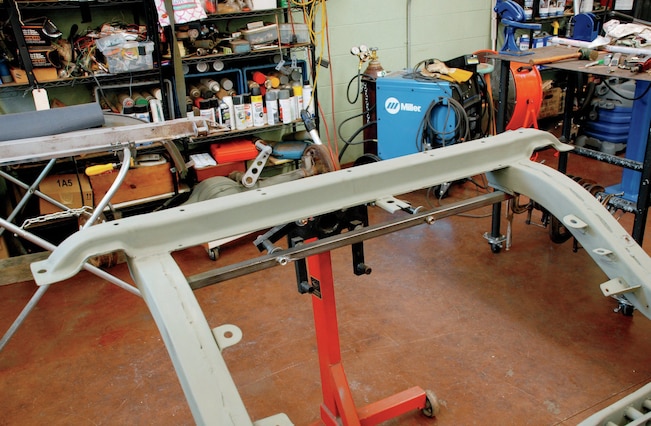 After removing the body from the frame we discovered what would qualify as an average C1 chassis that has spent its life east of the Mississippi. This particular car was a southern Kentucky/Indiana car and to that end we found plenty of good ol’ dirt bonded to the frame along with mostly surface rust with minimal pitting. Now, we say “mostly” because there were areas that required more than sandblasting to rid the rot.

One such area was the rear crossmember, which had typical outside corner rust-through. At first glance, a person might consider simply repairing the outside corners, but as we discovered that would be an inadequate repair. The only proper repair is to completely replace the rear crossmember, and while that may sound somewhat daunting, it is a fairly straightforward repair.

Unlike the new C7 chassis that is formed with 38 extrusions, 10 castings, 76 stampings, and 3 hydroformed parts, the C1 chassis consists of mild steel framerails with a basic center X-brace. The framerails are two-piece units seam-welded top and bottom. Rivets and welds hold the entire chassis together. The technology employed on the C1 chassis is much closer to a regular car frame from the 1940’s than the new millennium.

While this low-tech frame may lack torsional rigidity and weigh considerably more than a modern Corvette chassis, things aren’t all bad. The bad news is the frame needs repair; the good news is Corvette Central has a replacement crossmember and the repair can be done in a well-equipped home shop, something that can’t be said about a C7 frame.

We began the frame repair with a trip to the local mediablaster where the frame was hydroglass blasted, basically glass particles mixed with water and blasted at high pressure. The result was impressive, all surface rust, dirt, grease, and grime were gone but the base material was not attacked. The blasting exposed suspect areas and showed complete rust-through in two places: the rear crossmember and the bottom of the “dog leg” on the passenger side.

We did not want to lose the rivet holes as they are the initial locator holes for the new crossmember. With that in mind we fabricated a piece of 1/8-inch flat stock measuring 2 5/8x6 inches. The plate was clamped inside the framerail and a transfer punch located the two rivet holes on the rear of the new piece. We drilled two more holes on the front end of the plate and blind welded nuts to the bottom side. Corresponding holes were drilled in the frame so we now had four bolts securing the plate in position. The rusted area was cut out and cleaned up before we welded the plate in place. This provided us with a strong repair, but we still had to fabricate the step in the framerail so the new crossmember would rest squarely on the framerail. To that end a piece of 1 1/4x1/8-inch flat stock was cut to fit and welded in place. This was done to both sides of the framerail and we now had a structurally sound pair of framerails. We’d say they are “good as new” but actually the double thickness makes them better than new.

From here, locating and installing the new Corvette Central rear crossmember was quite simple. The key here is to take your time locating the crossmember. This piece is structurally very important since it is the rear spring mount, it must also be accurately located as it incorporates both suspension and body mounting points.

Next, we tack welded the crossmember in place, double-checked our measurements and then completely welded the Corvette Central reproduction crossmember in place. When we ordered the crossmember from Corvette Central we also ordered the four rivets to provide a factory look to the installation. This would be all-important if we were doing a true restoration rather than our mildly modified build. Using a rivet gun and bucking bar we installed the rivets. It should be noted that due to our extra thick repair plate the rivets were just long enough to be expanded.

It is also worth mentioning the method used to weld the crossmember in place. If you are going for a true restoration, reproduce the factory welds as close as possible using either a stick welder or a MIG welder to run a series of 1- to 2-inch welds. A digital photo of the original welds would serve as a guide for your welding. Once again, we are doing a mildly modified chassis so we elected to TIG weld the entire perimeter of the crossmember where it meets the framerail. This provides a clean, strong weld and welding the entire seam prevents water from migrating between the frame and the crossmember. No water means no rust and we like that idea.

Replacing the rear crossmember in our C1 chassis with a Corvette Central reproduction crossmember turned out to be a nice weekend project. We’re sure it could have been done quicker, but we like to take our time on critical repairs. Once again, this project is well within the reach of the average Corvette enthusiast with a well-equipped home shop. The Corvette Central parts fit flawlessly and we now have solid attachment points for our rear suspension and the rear body mounts.

01. A side-by-side comparison shows the new Corvette Central crossmember (lower) is a perfect reproduction of the original. The new crossmember proved to be both the perfect fit and perfect repair for our ’60 Corvette frame.

02. A temporary brace was fabricated to hold the framerails in position. First, we had to heat the bumper bracket plate to remove the broken bolts.

03. The frame was sent off to be mediablasted and when we brought it home this temporary brace was fabricated from 1-inch square tubing and bolted in place to ensure the framerails don’t move.

04. The entire rear suspension was removed from the car since the rear crossmember also serves as the rear spring shackle mount. We then used two engine stands as a rotisserie to mount the frame to for a more comfortable working height.

05. With the spring shackle removed it is easy to see that the rear crossmember has completely rusted through in the lower portion and next to the body mount hole.

06. Looking inside the framerail it was obvious there was rust in the area, we were hoping for just some surface rust, but that was a dream. If your inner framerail looks like this, chances are you need a new rear crossmember.

07. These two factory rivets would provide the mounting and alignment holes for our new Corvette Central rear crossmember.

08. We cut the heads off the two rivets with a die grinder and cutoff wheel. The same tool would slice through the factory welds to remove the original, rusted-out rear crossmember.

09. A punch and a hammer knocked out the rivet shanks, leaving us a factory hole to utilize as a locator for the new crossmember.

11. This amount of rust would definitely compromise the strength of the frame, so we removed all the rotted area and, of course, had the new Corvette Central rear crossmember on hand too.

12. We first welded a 2 5/8x6-inch plate to fill the hole, and then a 1 1/4x1/8-inch plate was used to form the step in the frame. The two bolts on the right hold the lower plate in place for welding.

13. We TIG welded the plates in place on both framerails making them actually stronger than new. The line on the inner framerail is where the old crossmember was located.

14. Here is the finished repair, note the two front bolts (left) have been eliminated. This entire permanent repair will be covered by the new rear crossmember.

15. If you have performed the repair properly the crossmember should fit like this. If it doesn’t, do a little grinding on the welds until the crossmember fits perfectly.

16. The two rear rivet holes are used to bolt the new Corvette Central rear crossmember in place. Just snug the bolts down at first so you can take measurements.

17. We used one of the rivets for the crossmember as a measuring point back to a hole in the new crossmember. We cross-measured and also measured straight down the framerail to ensure the crossmember was properly positioned.

18. Satisfied that the crossmember was centered and square to the framerails and in the proper front-to-rear position we clamped and tack welded the crossmember in place.

19. After double-checking our measurements, we fired up our trusty Miller Synchrowave 200 and TIG welded the crossmember. Remember to alternate sides to prevent any chance of pulling the crossmember out of alignment.

20. We lap-welded the flange with two passes for a strong, clean weld. If you are doing a faithful restoration, a stick or MIG would be used in a series of shorter welds.

21. Few things are manlier than wielding a rivet gun during your project. Corvette Central has manual rivet drivers available too, but since we have a pneumatic one it’s time to drive some rivets.

22. Holding the bucking bar inside the framerail, the rivet gun squeezed off some good hard raps expanding the rivet into the hole. In a matter of minutes we had four rivets in place.

23. Looking to the world like a factory-installed rivet, this project is almost done. Note the full weld on the rear of the framerail, the rivets were simply a locating tool, the welding is doing the work now.

25. And here it is, the completed Corvette Central reproduction rear crossmember in place on our 1960 Corvette frame. Now we’re ready for some new suspension, front and rear.