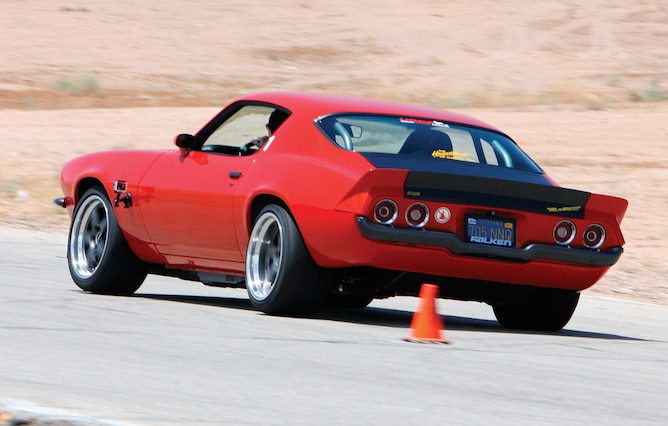 Independent rear suspensions have been around for a long time and, while complicated, offer several benefits over the live axles found in most of our favorite classic Chevys. Art Morrison Enterprises (AME) knows this and spent three years coming up with its new Multilink IRS. The unique cradle makes the install slightly less painful, and, once installed, servicing the system is a piece of cake. The designers also focused on enhancing some of the benefits of an IRS, the most important ones being improved ride quality and better wheel control.

The ride improves because around 100 pounds of unsprung weight is knocked off the rear. This means less spring is required to control wheel movement. NVH (noise/vibration/harshness) is also reduced due to traveling through three sets of bushings before reaching the interior. Better wheel control makes for increased handling performance because the design makes it easy to establish independent camber, caster, and toe curves. In addition, the toe link locations can be tuned for more dynamic steering while maintaining stability in “high bump” situations. The right rear and left rear wheels are decoupled (as opposed to a live axle) and can each react to the road surface without affecting the opposite wheel.

So, yeah, IRS is all that and the proverbial bag o’ chips, but our classics weren’t designed to accommodate it, and as such, installing one requires a bit of work. AME designed this on a first-gen Camaro, and replacement framerails for those cars are available and make install a lot simpler. For other cars, modifying the existing framerails is necessary. The system comes in four different track widths and can be had with a variety of gear ratios, from 3.54 all the way to 5.13.

Mary Pozzi first fell in love with this system when testing AME’s test-mule ’69 Camaro at Willow Springs in 2013. Given that, she volunteered to be one of the first to install it in a car other than a first-gen Camaro, namely her ’73 Camaro. Luckily, her husband, Dave Pozzi, is crazy good fabricator and has a wicked set of tools. To see what’s involved, we headed over to Pozzi Racing to watch the sparks fly as Dave and Mary Pozzi endeavored to make an already great handler a bit better. As it showed in our January issue, the IRS works.

01. Here’s what comes in the crate from Art Morrison Enterprises (AME). The IRS system can be ordered with or without framerails. Since the framerails are best suited for a first-gen and we’re installing this in a second-gen Camaro, we opted for the kit that didn’t include them. The system included a stout Strange-built Dana 60, which is perfect for how hard the owner will be driving this car.

02. To do this install you’ll need lots of tools and fabrication skills. You will also want to have a lift and a transmission jack. The metal parts comes uncoated, but it’s best to get the system installed and then remove it, disassemble, and paint or powdercoat it.

03. After inspecting the IRS, we were most impressed with two aspects: Grade 8 hardware and perfect welds.

04. To see what we were up against, we lifted the IRS up under the Camaro and found a host of clearance issues. Fortunately, it was nothing a plasma torch and MIG welder couldn’t fix.

05. In addition to the floor and framerails, we also found that the trunk area would need some surgery as well. This install isn’t for the weekend warrior with a basic set of tools. But, if you have some basic fabrication skills and can wield a welder, then it’s not rocket science.

06. The best plan is to “nibble away” at the project. That’s to say you want to cut small and then trim away more material until you get enough clearance. Obviously, you have to remove much of the interior and you’ll want to have welding blankets, spray water bottles, and a fire extinguisher handy.

07. Dave Pozzi continued to do the “cut, test-fit, cut” dance on the floor panels.

08. Did we mention that much of the floor has to be eviscerated? Hey, if you want an omelet you need to break a few eggs.

09. Like the floor, much of the OEM framerails will need to be cut away as well. The arrows helped give us a general idea of how much needed to be removed. Of course, since this is the car’s frame we will make sure that it’s stronger when we’re done than when we started.

10. We had clearance issues near the trunk as well, so Dave measured and marked where he would need to cut. We also made sure to support the rear of the car when we started making frame cuts.

11. Here you can see the area marked out that needed to be removed. The hole in the corner of the trunk pan is there to accommodate remote reservoirs that are not part of this IRS install.

12. With that section of the trunk removed there was now plenty of room for the IRS cradle. On a first-gen Camaro this system is much easier to install and requires far less metal surgery.

14. This was how much of the floor and framerails we had to remove.

15. The last things to cut were the notches for the front support crossmember that came in the AME kit. The proper location and orientation of this piece is critical to having the system be right in the end.

16. This kit was designed on a first-gen and as such, the front crossmember was a bit too long. We simply knocked a little off each end (carefully measuring and taking off equal amounts) and welded on new end caps for a perfect fit.

17. We also modified the crossmember for a little additional clearance.

18. The modified crossmember was then put in place and, after ensuring it was level, welded it in place. Before doing this though, Dave put the level on the Camaro’s rocker panel, below the door, to make sure the car was level.

19. The front mount was then welded to the new crossmember. To make sure we did it right, the cradle was once again lifted up into position.

20. The rear cradle and shock brackets were stitched in place. We also added some bracing to the bottom of the framerails. After all, better a bit too strong than the other way around.

21. The cut framerails were then closed off and strengthened with additional steel. Gussets were added in the car to support the new floor panels.

22. Here are the newly fabricated floor panels in place. Dave even got fancy and rolled beads in the panels for additional strength.

23. A view of the trunk area all patched up, seam sealed, and ready for paint.

24. After painting the underside of the car grey, we lifted the AME IRS into place and secured it to the four mounting points. The instructions included detailed torque specifications for all of the various bolts and fasteners.

25. Using a traditional sway bar would be challenging, so the AME bar is a two-piece deal with a special coupler in the center. The sway bar is fully adjustable.

26. Routing the exhaust was the next big step. The best way was to route it down, and back of the differential. With so much going on back here, space is tight. The arrow points to the sway bar coupler previously mentioned.

27. The RideTech coilover shocks were then installed and Dave ran the remote reservoirs into the trunk and secured them to the rollbar.

28. We needed longer studs for our Forgeline wheels, so we replaced the GM studs in the ZR1 bearing hubs with pieces from ARP.

29. Completing the system was a Baer big-brake kit. With massive, nickel-coated 6R calipers and 14-inch rotors, the Camaro will have plenty of stopping grip.

30. With everything in place, it was time to do a final torque check of all the hardware. To make sure we didn’t miss anything we put a yellow hash mark on each nut, bolt, and fastener as we went along. You can also see one of the eccentrics used for adjusting the system’s camber and toe once it goes to the alignment shop. Lastly, Dave went through and hit all the zerk fittings with a shot of grease. And just like that we were ready to enjoy the benefits of an independent rear suspension. At our 2014 Suspension & Handling Challenge, Mary’s Camaro turned in the fastest autocross time (see the Jan. ’15 issue).