Newsletter
Sign Up today for our FREE Newsletter and get the latest articles and news delivered right to your inbox.
Home
Super Chevy
How To
Car Care

12 Tips For Getting Your Chevy Ready for Winter 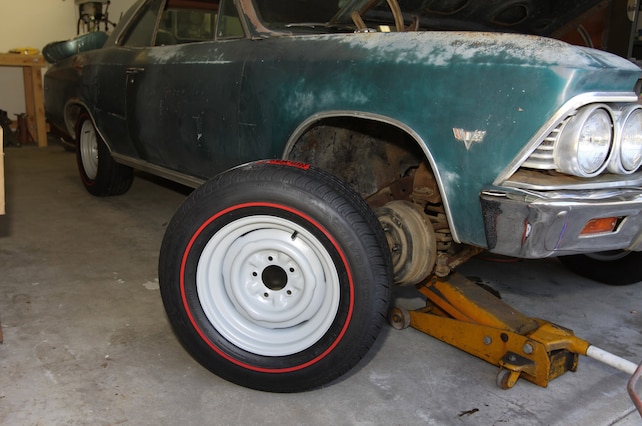 With Old Lady Winter right around the corner, is your classic Chevrolet ready to meet the harsh demands of extreme cold and heavy snow? If you live in the Midwestern to Eastern states, there’s little doubt you’ll need to be thinking about how to properly store your car. On the other end of North America, out on the West Coast, where there’s a chance of driving all year long, amazingly, the winterization process is surprisingly similar.

We used a combination of Amsoil lubrication products to service the mechanical needs of our 1966 Chevelle Malibu and Mothers Polishes to preserve the cosmetic side of things. The precautions we took to preserve the Chevelle are universal to all automobiles that burn gasoline, have hydraulic brakes, rubber tires, plus one would like to preserve the vehicle’s cosmetic appearance.

Not shown in photos, but there’s several ways to lengthen the life of a car battery when it’s not in use. The cheapest, but also the most inconvenient method is to disconnect the battery. If a courtesy light stays on and goes undetected, or there’s bad diode in the alternator the battery is going to drain until it’s flat and in an un-rechargeable state. To keep the battery charged while a car is being stored, a product like Performance Distributors’ Battery Minder not only maintains a charge it has a desulphation pulse that keeps sulphation from occurring on the plates.

Also, whether your car will be driven or stored, the cooling system will need checking. If the car will be stored for the winter, it can be a good idea to drain the coolant entirely. If it will be driven however, make sure there is a sufficient mix of antifreeze, or your engine could turn into a popsicle in a hurry!

1. Left in place without rotating the full weight of the car will create flat spots on tires. The car should be raised in the air and placed on jack stands.

2. Instead of ruining perfectly good tires, installing tires not fit for street use, that will still hold air can suffice in lieu of placing the car on jack stands.

3. Tires should be stored laying on their side and not in an upright position.

4. Acids form in dirty oil contaminated with moisture and cause rust and corrosion. These acids also cause damage to seals and gaskets. It’s a good practice to renew any fluid that attracts moisture at a faster rate during inactivity. Particularly important is to add a gasoline stabilizer to prevent stale gasoline from turning into harmful varnish, and to prevent ethanol corrosion.

5. Don’t leave a quart of dirty oil to circulate with clean oil. A new oil filter should always be included with an oil change.

7. Never put a car into storage without washing first. An unwashed car will have a film, going from bad to worst, salt from winter road use or ocean air, jet fuel from low flying aircraft, or acid rain.

8. Use a good chrome polish. Light film from the above contaminants that isn’t removed from bright work will turn into rust, or oxidation and permanently damage anodized aluminum trim and chrome plating.

9. Four-ott (0000) ultrafine steel wool used in addition to chrome polish works fantastic, but can leave tiny metal shards that will rust. The best solution is to use ultrafine bronze wool.

10. For new chrome, or to add a glossier protective barrier to chrome treated in the previous manner described, Mothers new All-Chrome can’t be beat.

12. Lubricating (greasing) the chassis will flush out any moisture from tie rod ends, ball joints and clutch linkages etc. Old grease should be flushed out before it’s allowed to cake and plug passages or zerk fittings.

How to Remove Stuck Fuel Filters from Rusty Fuel Lines

» Read More
How To Dyno Tune Your Corvette

Get the basics on how chassis dynos are done. The Tuning School gives the full dyno tuning experience on a mostly stock C3 Corvette and a modified C6.

» Read More
Everything You Need To Know About Octane

We break down everything you need to know about octane, including what it is, how it's done, the best race fules, and more.

This is the ultimate guide to restoring and caring for car chrome. Bring out the brilliance on polished metal with help from Mothers and Eastwood.

» Read More
Tips for Storing a Classic Chevy for the Winter

Every winter, readers ask us how to store a classic Chevy for the season. Get our storage tips along with finding out how to ID an engine by the numbers.