Newsletter
Sign Up today for our FREE Newsletter and get the latest articles and news delivered right to your inbox.
Home
Super Chevy
How To
Car Audio

How To Install an Aftermarket Radio in a Trailblazer SS 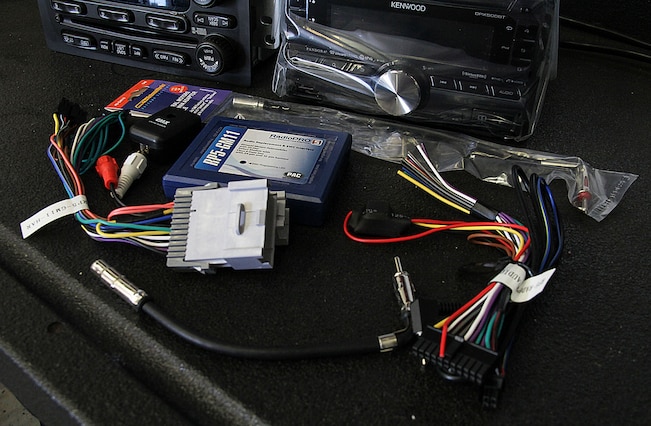 When the radio went out in my daily-driven 2008 Chevy Trailblazer SS, I knew I had to do something about it fast. Spending two hours a day (sometimes more) in your vehicle is a long time to be without a radio. But, where to begin? Factory amplifier, satellite radio, OnStar, steering wheel controls, etc – installing a radio in a late model car, truck, or SUV can be intimidating. However, I can assure you, it really isn’t all that bad.

Step one is figuring out your needs, wants, and budget. Having spent a pretty penny on a top of the line Pioneer touchscreen navigation on my 2005 Corvette, my budget was quite a bit smaller for the Trailblazer SS. And as usual, a factory or replacement radio would have been extremely expensive. So the best route for my budget was an aftermarket radio with some sort of intuitive controls that would accommodate the Trailblazer SS’s Bose sound system and steering wheel controls, while adding Bluetooth, Pandora, and a USB input with iPod controls. Though I elected not to renew my XM subscription (why bother with Pandora and an iPod hookup), I also wanted that ability should I later chose to renew. However, when I asked around as to what would be compatible with the factory Trailblazer SS equipment and offer these options, answers were vague. So I did what any sensible car guy would do. I called Crutchfield.

Crutchfield has a large selection, which is easy to compare and filter by feature, style, price, and brand. Best of all, though, they will tell you exactly what you need to complete the install. For $200 I picked up a Kenwood DPX-500BT along with free hardware, GM antenna adapter and dash kit. A PAC RP5-GM11 was a separate purchase (for $92) that made the head unit compatible with all of the factory electronics I previously mentioned. I won’t dwell on the head unit too much, as it isn’t crucial to the installation, but it is important to remember the accessories. Without the PAC interface you can not utilize the steering wheel controls and other factory features such as OnStar, warning chimes, and the Bose amp.

Once I had the Trailblazer SS’s new head unit and all the necessary components it was time to head to the garage at the SIM Tech Center. I had our tech Darrell Kunda help with the wiring, but I can assure you that nearly anyone can do this install in less than 7 hours.

1. As you can see, the display on the Trailblazer SS head unit was not working at all. The 6-disc changer wouldn’t eject any CDs, nor would it shuffle (of course it was stuck on one of my least favorite albums too). It was just a matter of time before the radio and sound went all together.

2. After unhooking the Trailblazer's negative battery cable, the panel below the steering column must be removed. You’ll need a small flathead screwdriver to remove the plastic caps that cover these bolts on either side. The bolts on the bottom side have no covering.

3. After unsnapping the plastic panel, you can see the two screws on either side of the column that attach the gauge cluster surrounding. There are two more screws above the cluster, and one next to the cigarette lighter.

4. This dash panel snaps out carefully, though you’ll have a few electrical attachments to unhook before fully removing.

5. The rear window control module pops out by pressing on both sides (from the back) and pushing forward. Unhook the clip at the back rather than separating the clear plastic from the black part.

6. The lighting controls have two tabs on both sides (four total) and pulls out the back of the dash panel. It can sit (still hooked up) in the dash for the time being.

7. I found that a gentle shaking motion is best to wiggle the dash panel loose and remove it fully without breaking anything. Note: you will have to lower the steering wheel position as low as it will go for clearance.

8. Now that the radio is fully exposed you can unbolt it from the dash.

10. There are only three plugs that need to be removed, the small one to the left is for the antenna.

11. The cables can stay as-is for the time being. Eventually they will be stuffed down into the dash upon installation of the new radio.

12. This is the point of no-return. What did I do to this poor Trailblazer?

13. The PAC interface module is not completely plug-and-play. Matter of fact, it is pretty universal for GM models. You will need to connect the wires from it (right side) to the head unit’s unique harness.

14. The wiring harness (bottom right) and microphone input for the Bluetooth iPhone interface (thin black wire plugged in on the left) comes with the head unit. The antenna cable below it was the separate piece I mentioned previously, compatible with GM’s factory antenna.

15. Next you will need to parse out all the applicable wires and start connecting the head unit’s harness to the wiring that came with the PAC interface. To be safe, you should probably connect every wire you see that was mentioned in the schematic. We neglected one that turned out to be for the amplifier (Blue/White). The radio seemed to work perfectly except no sound was coming out of the speakers. Lesson learned. The black one Darrel is crimping here is the ground wire, yellow is the battery (power source), red is the accessory output, etc.

16. Ah the brackets. These things are universal, which means they universally don’t fit right out of the box. No matter what the directions say, be prepared to test fit and modify a few times. The two end pieces (poorly) sandwich the double-din faceplate.

17. First we connected the PAC interface module with the Trailblazer’s wiring, and then to the head unit. The white and red plugs will stay detached, but the black radio cable will be connected.

18. As you can see, these black plastic tabs would have the radio sticking 8-inches from the dash. Those will have to be cut off and smoothed, so that it sits flush. We also wound up cutting off a chunk of plastic inside the dash that sat behind the radio. Apparently the aftermarket radio is longer than factory.

19. After a few trial fits, this is what they looked like.

20. At long last we bolted the new head unit in.

21. We ran the microphone on to the steering column, and concealed the majority of the wire behind the dash panel. A little double-sided tape attaches it.

22. After the final installation, the fit turned out to be excellent, which made me pleasantly surprised. It is actually flush to the dash. The microphone seems to work pretty well for an aftermarket piece, and I can now use my phone completely hands-free. The iPod input works perfectly and displays the song title and artist, and you can skip to the next song via the steering wheel controls. But there is some issue with the Bluetooth-activated Pandora controls. I later discovered that this Kenwood unit was designed to work with the iPhone 4 and 4S, which accounted for some connectivity issues. However, it does still play Pandora, you just don’t have the display and controls. With ever-changing technology, this sort of compatibility issue is to be expected unfortunately.

Check out Greg Hurlbutt's 11-second 2007 Chevrolet Trailblazer SS! This SUV was bought for daily transportation and practicality, yet Greg couldn't help himself with a few mods.

We add a Baer Big Brake Kit for a Chevy Trailblazer for the ultimate stopping power. Follow along with us on this install, in the April 2013 issue of GM High-Tech Performance Magazine.

Martin Cox's 2006 Chevrolet Trailblazer is obviously a heavy car but it stills ran 9.06 at 149 which is very impressive. Click here for more details or check out the April issue of GM High-Tech Performance Magazine

Check out this Fast LSXRT intake manifold that gets installed on Chevrolet Trailblazer SS. Read more only at www.gmhightechperformance.com, the official website for GM High-Tech Performance Magazine!

» Read More
How to Install Modern Audio Into Vintage Corvettes

Selection and installation of modern audio radio and speakers into vintage Corvettes.

Check out how we installed a modern sound system from RetroSound on a 1963 Nova wagon. You can cruise with modern technology while keeping the looks classic!