Newsletter
Sign Up today for our FREE Newsletter and get the latest articles and news delivered right to your inbox.
Home
Camaro Performers
How To
Brakes

We Upgrade A Second-Gen From Twin-Piston To Baer's New Six-Piston Calipers. 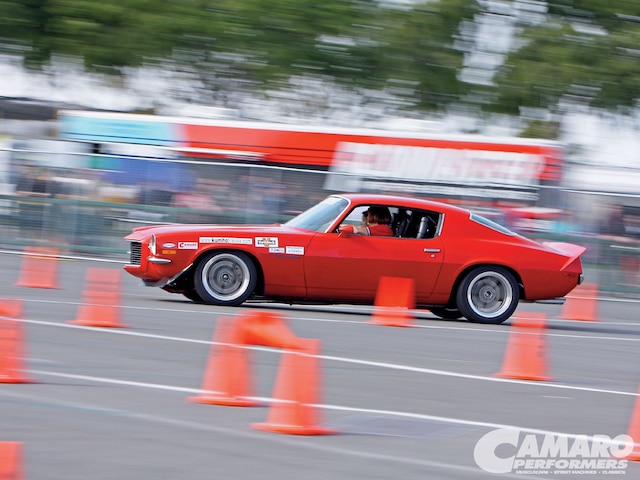 When people think of brakes, they typically focus on their role in slowing a car down to a stop, but when it comes to performance driving, their main task is to make you faster. Yep, great brakes can knock heapin' chunks off your lap times if you decide to hit the autocross or road course. By having a brake system capable of quickly bleeding off speed repeatedly, a driver can drive deeper into a corner before having to hammer the binders. This ability to carry speed longer adds up over the course of a lap, and can turn an average car into track star.

There also needs to be a discussion about what makes a particular braking system great, which includes more than just their ability to stop a car on a dime. Also important when choosing a performance set of brakes, is to look at their ability to take the punishment inherent to being abused repeatedly over a short period of time. When they can't take the heat, they vacate the kitchen in a little dance we call fade. This is when either the pads exceed the temperature to provide adequate friction, or when heat is transferred into the brake fluid to the point where it boils. Neither of these things will happen when you're cruising around town, but when you hit the track, it's a whole other ballgame.

Baer has been building brakes for a long time now, and of their most popular brake packages has been their Track System. Consisting of a two-piston aluminum caliper and one-piece 13-inch rotor, it's leaps and bounds better than the stock stuff, but it does have limitations. One of these is related to the stiffness of the caliper. They were developed for the street, and under hard braking the bodies can flex, causing a loss of performance. They also feature aluminum pistons. The problem with aluminum is that it's a far better conductor of heat than the stainless steel found in most modern high-performance calipers. This is a bad thing since the last place you want brake heat transmitted is into your fluid. Baer saw these limitations and decided to develop a line of calipers with the performance driver in mind. Their new line of 6P calipers are extremely stiff, feature stainless pistons, and are more than capable of handing trips around any track while maintaining their streetability. Best of all, at $495 per caliper, they won't put you in permanent debt.

So, Baer has a sexy new caliper and scores of customers with Track Systems already on their rides. With this in mind, they developed a kit that would let Track System owners upgrade their rides without buying a whole new brake package. One such longtime Baer customer is autocross maven Mary Pozzi. She's been rockin' a Track System on her '73 Camaro for years now, and knows their good, bad, and ugly sides. With a pair of 6P calipers in hand, we went over to Pozzi Racing to see if we could make her Camaro faster by slowing it down quicker.

But Do They Stop Better? Steve Rupp from Camaro Performers magazine, graciously allowed me the opportunity to upgrade my existing Baer Brake Track front calipers with a set of Baer 6P calipers, and followed with instructions to go forth and then stop, a lot. With plans to autocross and take in a few track days, I'd purchased the Track system back in 2002 when starting the build on my '73 Camaro. Autocrossing never posed any problems for the Track system, but the track events sure did, as trying to get 3,600 lbs of forward motion slowed down is a huge job. Pad friction material upgrades and brake ducting, to keep the rotors cooler, helped get in a few more laps, but I rarely finished a session due to the inevitable brake fade and low pedal. When I heard Baer had an upgrade package, I jumped at it.

The actual install process was straightforward, uncomplicated, and took about two hours. Parts were simple, as the calipers and solid adapter brackets all came with the kit. The best part was that the Baer Track rotors can be reused for the new upgraded 6P calipers. The calipers come with pre-bedded pads, and I strongly recommend that you either have the rotors turned or replaced if they're not serviceable, as the 6P friction material sweep area is wider than that for the Track pad. Like the Track system (Corvette C4), the 6P calipers use standard Corvette pads (C5/C6, non-ZO6 or ZR1) which are available in a variety of friction materials. For my car's use, I plan to replace the existing Baer 6P pads with Hawk HP Plus, as those were used with the Track calipers, and I'm used to their performance. After replenishing the hydraulic system with fluid and checking for any leaks, then bleeding the system, I was done.

And as for the benefit, I had the opportunity to test the Camaro at two autocrosses, and after adjusting the brake bias, I immediately noticed a difference in the braking ability. The CliffNotes version is that stopping appeared easier for the car with the same amount of pedal effort. Where the stopping was really good with the Track system calipers, it was exceptional with the 6P's. The Baer 6P calipers are a huge improvement and should be a consideration for anyone looking to upgrade their existing Baer brake system or replace OEM. I can't wait until the next track day to see if they're as good hauling this tank down from 120 mph as they are slowing it from 60 mph autocross speeds.