Newsletter
Sign Up today for our FREE Newsletter and get the latest articles and news delivered right to your inbox.
Home
Super Chevy
How To
Brakes

How to Upgrade Your Street Brakes for Track Duty 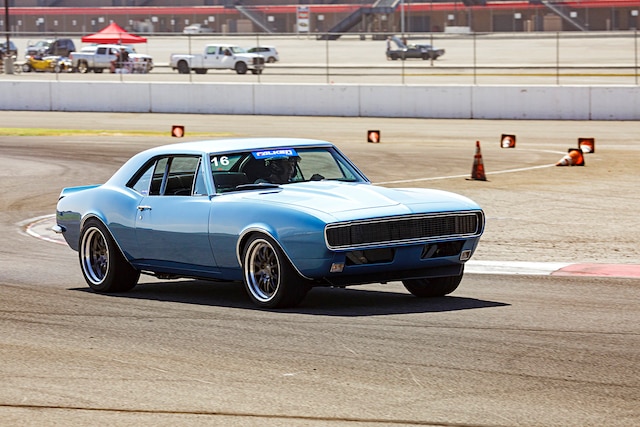 Having the right tool for the job is half the battle when building a hot Chevy. After all, parts that are fine for cruising the local car show or cruise weren’t made for hard track use and hard-core, competition-level parts are overkill for putting around town. The problem arises when the goal for how the car will be used changes. Such was the case with Tim Lee’s 1967 Camaro RS. When he first built the car, Tim envisioned lots of cruising and maybe a few quarter-mile passes. As such, the smaller Wilwood brakes that came with his Total Cost Involved Engineering suspension were more than adequate. But then Tim started to get the itch to do a little autocross and track work. Well, those binders that held up fine for spirited street use couldn’t handle hard track use.

Fortunately for Tim, Wilwood offers many levels of braking components so upgrading his system was a fairly painless endeavor. The main move was swapping to rotors with more mass and better cooling. Aside from beefier rotors we also added front calipers with more clamping force and moved to track-capable pads and brake fluid that wouldn’t boil with hard use. So, if you’ve been toying with the idea of hitting a few track days with your street-cruiser Chevy then follow along and see how a few simple upgrades can really up your ride’s braking performance, which will, in turn, lower your lap times.

1. Tim Lee’s 1967 Camaro was ready for street duty, but since he was looking to run in our 2016 Falken Tire Super Chevy Muscle Car Challenge, he wanted to do a few upgrades. At the top of the list were brakes that would handle the track abuse. The front brakes that came with his Total Cost Involved Engineering (TCI) suspension were not going to cut it. But with the right parts he could get better, and more consistent, braking.

2. After pulling off the four-piston calipers, rotors, and bearing hubs we found this backing plate. These are fine for street cruisers that want to limit brake dust, but they hinder airflow and trap a lot of heat in the rotors.

3. This Wilwood spindle bracket replaced the large rotor shield and gave us a secure place to mount the caliper that wouldn’t starve the rotor of airflow. It’s also a more rigid mounting system.

4. To the new spindle bracket we were able to attach the support for the radial-mount caliper. The left/right spacing can be changed by using Wilwood shims between the spindle bracket and the caliper mount. How many you need will vary from car to car, we needed two.

5. The old bearing hub supported the rotor, which is functionally fine, but heavier than needed. The new bearing up will save weight and support a more traditional rotor/hat combination.

6. And here’s the new bearing hub with the radial caliper mounting system in place.

7. It’s pretty easy to see how much more mass is in the new Spec 37 Wilwood rotor (bottom) compared to the much thinner rotor on top. This mass will help soak up more heat and give more consistent braking under heavy use. It also features a much more efficient venting design that will help get that heat shed away from the brake components.

8. Rather than being bolted to the bearing hub like the old system, the new Spec 37 rotor attaches to an aluminum hat with 12-point ARP fasteners. You can safety wire them if you want, but according to Wilwood all you really need to do is add some red thread locker and torque them to 21 ft-lb.

9. The upside to the rotor using an aluminum hat is that, even with the heavier rotor, the assembly (rotor, hat, and bearing hub) ends up being the same weight as the old system with the rotor mounted to the hat, only now that extra mass is where it will do some good, in the rotor. The venting system and slots the new rotors are direction, so we made sure to have the arrow going in the right direction.

10. Another advantage to this system is that we don’t have to pull the bearing hub to service the rotor, which is a real time saver. You’ll also notice the new rotors have slots, but no holes. There was a time when the holes helped, but with modern pad materials they just aren’t functionally necessary any longer. People do tend to like the “racy” look of the holes, but under hard use the holes just provide places for cracks to start and they also reduce the rotor’s mass, and when you’re trying to control heat, mass is a good thing.

11. Both of these calipers will stop your Chevy just fine on the street, but the new six-piston WS6 caliper (left) is what you need if hard braking is in your plans. The new caliper uses a larger pad and a completely different piston arrangement. The new WS6 is also a far more rigid caliper, which again improves braking, and the stainless pistons will resist transmitting heat to the brake fluid.

12. The old caliper featured four pistons of equal size, while the new one has six pistons of varying sizes. By having differential piston sizing equal pressure can be exerted across the pad. This promotes even pad wear, but more importantly, equal pressure across the entire pad, which improves stopping performance.

13. The Wilwood kit included all the needed hardware for our conversion, which is nice because some of the parts are not easily found at your local speed shop or hardware store.

14. Wilwood offers a huge variety of pads from strictly street to full race. Their track pads will kill rotors on the street and the street pads will fade quickly on the track. So, if you’re really serious you’ll swap pads at the track. If you want something that can handle both street driving and moderately hard track use, then do what we did and get some of their BP-20 smart pads. They are low noise/dust for the street and will take a lot of track abuse as well. For very hard track use, and better track performance, stepping up to their BP-30 or one of their “lettered pads” like an H pad will provide superior performance. Just make sure not to run them on the street or you’ll be buying new rotors pretty quickly.

15. And with that our front system was upgraded and ready to hit the road course.

16. The rear brakes featured another pair of four-piston calipers and a one-piece slotted and drilled rotor/hat arrangement.

17. Now, we could have changed out all of these parts, but to be honest the rear brakes do little braking compared to the fronts. In this case just ditching the old pads for a set of BP-20 pads was enough to get the back system up to speed.

18. When you use your brakes hard, heat is created. Most of this is sucked into the mass of the rotor and then shed to the atmosphere by airflow through the system. However, heat still works its way into the calipers and is transferred to the brake fluid. If enough heat gets into the fluid it will boil and the brakes will take a vacation. The best way to combat this is to use a fluid that can hold up to high heat, like Wilwood’s EXP 600 Plus.