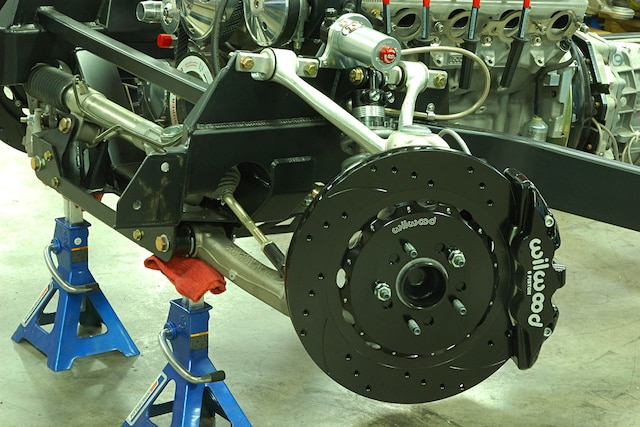 There’s still plenty to do on Scarlett, our 1972 coupe project car, as we near the end of the heavy mechanical work. After installing the suspension, including C7 components and QA1 Quad Adjust coilovers, our Street Shop, Inc. custom chassis is almost fully assembled, and after the completion of a little fiberglass work will be ready to go back under the body. But first, brakes.

Although we don’t know exactly what Scarlett’s top speed will be with over 600 horsepower on tap, we expect her to be fast—fast enough to need serious brakes, which are even more important than the ability to accelerate. As with airplanes, flying may be fun, but landing is still the critical part. A car that’s slower than expected is merely disappointing, but brake failure can both destroy the car and end your life.

Previously, we improved the brakes on the factory chassis by replacing them with upgraded components from Wilwood, including a new master cylinder and alloy D8 calipers (six-piston front, four-piston rear) that removed about 5.5 pounds of unspring weight per corner, in addition to greatly improving how the car stopped. A new set of drilled and slotted rotors in the standard 11.75-inch diameter rounded out the package, (“What Lies Beneath,” Oct. ’12).

One bad thing about upgrading to the new chassis is that we could not reuse the C3-style brakes with the new frame’s C7 suspension. The good news is that it opened up more brake options since we were no longer limited to ’70’s-era stock-sized components. Having been more than satisfied with the performance of Wilwood products, we turned to them again.

After looking through the C7 options, we selected their Aero6 Big Brake front kit and Aero4 rear kit, which still works with the OE parking brake. Both are compatible with stock master cylinder output and ABS function, which, while not relevant for our application, matters a great deal for those looking to upgrade the brakes on their C7. The rear kit features four-piston calipers paired with 14.25-inch rotors, while the front kit comes with six-piston calipers and standard 14.25-inch or optional 15-inch rotors. Both the front and rear use Wilwood’s forged Aero series calipers that incorporate race technology and a radial mount system for maximum versatility. Standard colors are red, nickel and black, which is what we chose.

When they say “big brake,” it may be hard to understand how large of a disc we’re talking about. Fifteen-inch is the size of the wheels that came on C3 Corvettes, and the box the rotor comes in looks like it should hold a pizza. Since subtlety hasn’t exactly been Scarlett’s hallmark, naturally, we picked the bigger option.

The big rotors do come at a price, though: the 14.25-inch rotors require at least an 18-inch wheel, while the 15s up front would require a 19-inch wheel. Even so, if you’re ordering wheels it would be prudent to check with the wheel manufacturer to make sure the brake clearance will be adequate (there’s a diagram on the Wilwood website with the critical dimensions).

At the risk of sounding repetitive, since these are C7 brakes the installation procedure we followed on Scarlett is the same procedure for putting them on a 2014-and-newer Corvette. One caveat being that you would presumable first have to remove the factory brakes. Since this is a first-time assembly, we skipped that stage.

Prior to installation, be aware that since the Wilwood kit uses a two-piece rotor, the rotor and hat will need to be assembled and the bolts that hold the two together should then be safety-wired after they’re torqued down. The wire and pliers to twist it are not terribly expensive (Summit Racing sells a kit for around $60), but you’ll want to make sure you have them on hand before you get started. While we give a brief overview of the process in the accompanying photos (and Wilwood includes abbreviated instructions in the assembly guide), see Steven Rupp’s “How to Safety Wire Your Bolts-Tight Wire” on superchevy.com for a more detailed description.

01. Wilwood’s upgrade C7 brake kits come per axle (this is the rear kit) and include calipers, pads and two-piece rotors as well as the braided steel brake hoses and all hardware required to complete the assembly. Installation is the same for front and rear kits.

02. The aluminum hat bolts to the Spec-37 iron rotor using 12 bolts that screw through the rotor and into these threaded holes on the hat. The top of the hat is shown here; the bolts install from underneath.

03. The 12-point rotor mounting bolts should be installed in an alternating pattern, just like lugs nuts, using red 271 Loctite to keep them in place.

04. We used a Snap-On digital torque wrench to torque the rotor mounting bolts in place, using the torque specs provided in the instructions: 155 in-lb for the front and 140 in-lb for the rear, again in an alternating pattern. Since red Loctite sets up quickly, you’ll want to torque the bolts as soon as possible.

05. Stainless safety wire comes in more than one size, including the Wilwood-recommended 0.032-inch (right) and the 0.041-inch that we started with, reasoning that thicker (stronger) would be better. After realizing the stiffness of the thicker wire made it pretty much impossible to thread through the bolt holes in the tight confines of the rotor assembly, we headed to the local speed shop for 0.032-inch wire.

06. The bolts are wired together in pairs, as shown here. Wilwood has brief guidelines in the assembly instructions, with a more detailed data sheet on their website. Note that the wire wraps around the head of the bolt in such a way that if one bolt begins to loosen, it will tighten the other.

07. The front 15-inch rotor assembled and ready for installation. It’s hard to get a feel for how big these rotors really are without seeing them in person. For some perspective, a large pizza from Domino’s is only 14-inch in diameter.

08. The calipers will need to be shimmed to make sure they are centered on the rotor, and the brake pads line up with the outer diameter of the rotor. This starts with the installation of the caliper mounting bracket, which bolts on to the spindle using two hefty M14 bolts. The 0.029-inch shims go on the bolts between the spindle and the bracket: we measured the shims with a dial caliper to account for minor dimensional differences and paired them accordingly.

09. Installing the caliper bracket on the front spindle. Once the caliper has been properly shimmed (which happens after both the caliper and rotors are installed), the bolts will receive Loctite (again with red 271) and torqued to 77 ft-lb.

10. Once the caliper bracket is in place, lubricate both mounting studs with light oil and slide on two 0.030-inch shims per stud prior to installing the caliper on the studs. After shimming is complete, the nuts on these studs will be torqued to 47 ft-lb.

11. Each kit (front and rear) comes with a pair of rotor registration adapters that go onto the axle hub, and which are installed prior to the rotor. The concave side goes against the hub, while the smaller outside diameter goes toward the rotor.

12. Installing the rotor registration adapter on the axle hub.

13. The Spec-37 rotors come in right- and left-hand versions, and are helpfully marked with an arrow showing the direction in which they should turn. The black finish is a protective coating that will quickly wear off once the brakes are used.

14. The massive six-piston front calipers, like the rotors, come in right- and left hand versions. Although they’re unmarked, an easy way to tell which is which is that the smaller piston should be on the leading edge and the largest piston is at the rotor exit end of the caliper.

15. The brake pads are held in the calipers by a pair of pad retaining pins kept in place by a pair of retaining clips that are easily removed with a pair of needle-nose pliers. The side-to-side dimension controlled by the shims between the caliper and bracket and spindle are measured prior to installing the pads. We used a pair of dial calipers to measure the distance between the rotor and caliper and adjusted the number of shims until it was equal on each side.

16. The next step is checking the orientation between the pads and the outer diameter of the rotor; if the top of the pad isn’t flush with the outside of the rotor, adjust the number of shims between the caliper and its mounting studs until it is. Note that the curvature of the pads may not exactly match the radius of the rotor.

17. The brake kits come with a 45-degree adapter for the braided steel brake hoses to mount to the caliper. Note that one side is an –AN thread that seals on the bevel at the end of the fitting while the other is a tapered NPT (pipe thread), which seals on the thread themselves. We used a PTFE-based sealant on the threads prior to installing the adapter in the caliper.

19. Although the instructions for a C7 say the factory brake hose bracket will need to be opened up, we didn’t have to do that on Scarlett; only tighten up the hose. All that remains is to add fluid, bleed, and then bed the brakes.