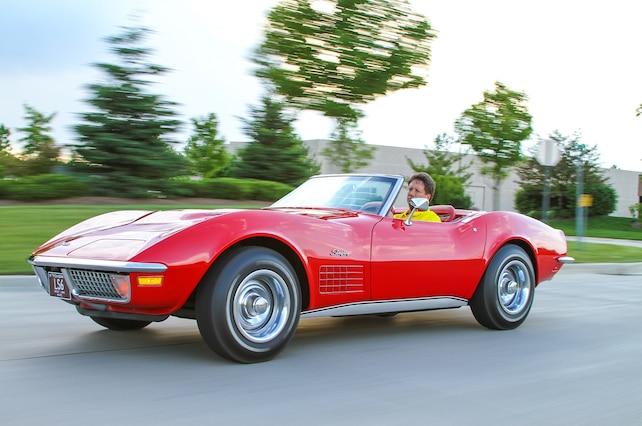 The Corvette ownership experience has always been unique. It’s a Chevrolet first and foremost, but from the fiberglass body to the independent rear suspension, its unique features and distinctive architecture mean not every repair job is the same as on a Chevelle or Suburban.

That’s especially true when it comes to brake maintenance on 1965-’67 C2s and the entire C3 generation. Thanks to the distinctive rear suspension geometry and the fact the rear brake rotors are fixed to the spindles, properly machining the rear rotors requires a unique procedure that frankly most repair shops get wrong.

“I’ve seen it a million times,” says Werner Meier, founder of Corvette restoration and service specialist Masterworks Automotive, in Madison Heights, Michigan. “These Corvettes are prone to caliper leakage that could easily be corrected, but can result in major braking issues if not addressed properly.”

Here’s why it goes wrong: Rotors are typically removed from the vehicle and turned on a bench lathe. That’s ill-advised in most cases because the general robustness of the Corvette’s rotors makes turning them mostly unnecessary, but it should never be performed for resurfacing the rear rotors. That’s because of the inability to properly orient them on the lathe arbor, resulting in excessive and intolerable lateral runout on the friction surfaces.

At the factory, the rear rotors and spindles were riveted together prior to final machining. Then, machining centers at both ends of the spindle located it during final machining operations. Processing the rotor/spindle assembly in that manner ensured that the rotor friction surfaces were absolutely perpendicular to the centerline of the spindle. In other words, lateral rotor runout was minimized or eliminated.

Elimination/minimization of lateral runout (less than 0.005-inch total indicator reading) is critical for proper braking performance. Because the calipers use lip-type seals, air can be introduced to the calipers if the pistons are subjected to the oscillations created by the rotors’ lateral movement. Over time and normal use, the air in the calipers will result in a “spongy” brake pedal and ultimately loss of brake function. Bleeding the brake system will provide temporary relief, but the problem will manifest itself again whenever the vehicle is driven.

“I’ve seen cars that have had the calipers replaced repeatedly as well as the master cylinder and safety valves to address the continual loss of pedal feel,” says Meier. “It was all because the rotors were improperly machined. There can be no tolerance for runout if braking performance is to be restored.”

Regrettably, most inspections will show that the rear rotors may have been separated from the spindle on many cars to repair the parking brake or the replace the spindle bearings. Reinstallation should be done after cleaning the mating surfaces and when maintaining the original orientation. If bleeding the brake system yields air from the caliper, it is likely the rotor is not running true.

If the total indicator reading exceeds 0.005-inch there are two recommended options: install a new rotor/spindle assembly from a supplier such as Bair’s Corvettes (www.bairs.com) or correct the runout on the car. Installing new rotor/spindle assemblies requires special tools to reset the rear spindle bearing clearance, so we’re focusing on correcting the runout in this story.

Most of the steps outlined here could be accomplished at home, but the lathe required for the final step of the procedure isn’t something you’re going to have in your toolbox. That’s why we left it to the professionals at Masterworks. If you seek out a shop to replicate this process, there are two types of on-vehicle machines they may use: a caliper-mounted lathe or hub-mounted lathe. The hub-mounted tool generally provides a more accurate result so ask for it.

In the end, the difference was as dramatic as Werner Meier suggested, giving our project car a firm pedal feel, more immediate stopping performance and greater overall driving confidence. It was a reminder that there’s nothing more satisfying than a properly prepared Corvette.

01. Sleuthing the stopping issues with this C3 started with removing the rear wheels. Masterworks Automotive suspected the problem was rooted in improperly machined rotors.

02. The suspected problem—rotors that had been removed from the spindles for machining—was pretty much confirmed when the first wheel was removed, exposing an original rivet with its head missing. It’s a sign the rotor had been separated from the spindle. Not good.

03. This rear view of a rotor/spindle assembly illustrates the importance of keeping the components together when truing the rotor. If the friction surface of the rotor isn’t perfectly parallel with the spindle’s mounting surface, the geometry of the whole assembly will be off, enabling air to creep into the brake system and amplify the problems of an already compromised braking system.

04. Preparing the rotor for proper on-vehicle machining begins with removing the caliper. It’s always a good idea to check the brake lines and the caliper itself, too. This car will also get a complete fluid change.

05. Next, the lug nuts are reinstalled and torqued to 75 ft-lb, as if the wheel was in place. The idea here is to make sure the rotor is seated squarely against the spindle before measuring the runout.

06. A dial indicator tells the story. The runout on this old rotor was 0.008-inch, when the maximum specification is 0.005-inch. It requires machining to true it up.

07. The rotor must be reaffixed to the spindle, per the factory’s design, before it can be machined. With the original rivets destroyed, their remnants on the spindle must be removed to make room for new fasteners. That starts with drilling out the center of each rivet.

08. The drilled-out rivet shaft weakens it, allowing the rivet to be more easily driven out of the rear of the spindle with a punch. This air tool made quick work of the task.

09. With the rivets removed, the spindle surface is cleaned of surface rust and dirt. A clean mounting surface for the rotor is a must.

10. Next, the original rivet holes in the spindle are tapped to accept 3/8-inch, 16 truss-head Allen bolts to hold on the rotor.

11. Like the spindle, the complementing mounting surface on the back of the rotor is cleaned in preparation for installation. It’s important to only use a mild abrasive pad or sand blaster to clean the surface and not remove any material.

12. The rotor is reinstalled on the spindle.

13. The bolt heads are a little proud, requiring grinding to make them flush with the rotor’s surface.

14. Here’s how the first bolt looks after it was ground smooth with the rotor.

15. Finally, the installed rotor is machined. A hub-mounted tool such as the one seen here is preferred over caliper-mounted lathes for greater accuracy on the Corvette. With this correct procedure completed, the brake performance on this C3 will change from spongy to firm, with more immediate stopping.