The Other Way Of Stopping, Part 2 - Wilwood Rear Disc Brakes 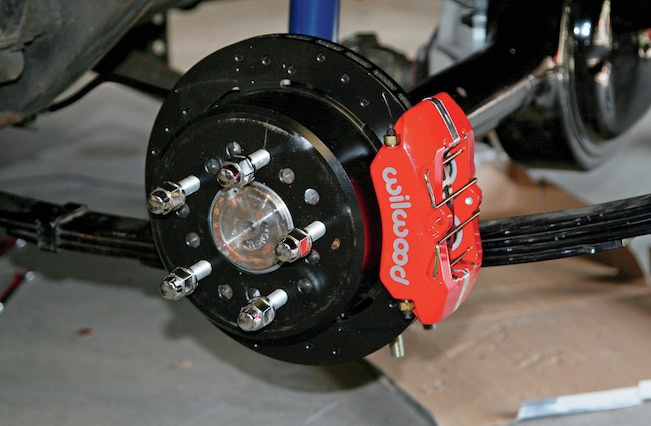 In our July issue, we covered the job of installing a pair Wilwood front disc brakes on a '58 Vette, an upgrade intended to enhance both the stopping power and the appearance of the car. This month we move aft, swapping out the car's Eisenhower-era rear drums for a complementary Wilwood disc/rotor pairing.

Adding a modicum of complexity to this portion of the project was the car owner's choice to concurrently install a fortified rear-axle assembly in place of the non-Posi original. If you've been keeping tabs on this buildup over the past several months, you'll recall that the '58 is equipped with a 406-inch small-block generating well north of 400 horsepower, far more than the open stocker was designed to handle. Since the brake swap involved partially disassembling the rear anyway, it just made sense to execute both tasks at once.

To recap, our Wilwood kit contained a quartet of Forged Dynalite Pro rotors measuring 11-inches in diameter, along with a master cylinder, a proportioning valve, and a full complement of installation hardware. While those rotors might sound smallish by today's standards, the advantages of even modestly sized disc brakes over an old-tech drum setup can't be overstated. Add in the fact that we were working within the confines of the Vette's 15-inch custom wheels and unaltered bodywork, and the benefits of this project quickly become apparent.

Let's take a look at the rear portion of our C1 brake upgrade now, as we continue to nudge this renascent street/strip hooligan toward modern levels of performance, safety, and daily livability.

01. With the car safely off the ground, it’s time to remove the five bolts from our Corvette Central–sourced Torq-Thrust II wheels, followed by the rims themselves.

02. At this point, the stock drums should slide right off.

03. Typically, the next step would be to take off the drum’s backing plate by removing the four bolts that hold it in place. But since we’re changing out the entire rearend, AntiVenom’s Greg Lovell instead turns his attention to the shackles securing the axle to the leaf spring.

04. With the right- and left-side shackles out, the only things keeping the rear-axle assembly in the car are the leaf bundles. (The driveshaft was unbolted prior to our shoot.) Once the brake lines are disconnected, the old rear should slide right out.

05. Here’s a comparison of the old rear (bottom) and the new heavy-duty piece. The latter is based on a 9-inch Ford design, with custom modifications to adapt it for use on our Vette.

06. After sliding the new rear into place under the car, Lovell reinstalls the shackles that secure it. Note that the existing driveshaft will need to be modified for compatibility with the 9-incher.

07. A heavy-duty rear demands a similarly stout differential, and this one fits the bill nicely. It comprises a Strange aluminum housing equipped with 3.50 gears and an Eaton Detroit Truetrac unit to prevent clicking and binding in corners.

08. Lift, shmift. Leveraging his Antaean strength and ballerina’s grace, Lovell maneuvers the differential into position and bolts it down. Attempt this bit of creative contortionism at your own risk.

10. Lovell slips one of our new Moser axles in next, followed by the retainer plate. Note that we’re using beefy, 3⁄8-inch Moser studs in anticipation of future dragstrip use.

11. After bolting down the backing-plate assembly, Lovell moves on to the spacer ring (shown), seal, and, finally, the new Wilwood rotor itself. You can see that Wilwood helpfully includes multiple bolt holes to ensure compatibility with a wide range of patterns.

12. Here’s the rotor as installed. Be sure to verify that you’ve oriented yours correctly, with the provided directional arrow pointing forward.

13. It’s now time to bolt up our Wilwood caliper, using the provided mounting shims to center the caliper over the rotor. Use the number of shims required to achieve equal rotor spacing for the outboard and inboard pistons. We needed three.

14. With the caliper on (you did remember to install the included pads, yes?), it’s time to shift our attention to the parking-brake lines. After removing the stock lines and performing an initial mockup, Lovell cuts the jacket on the Wilwood–supplied line to fit.

15. All that’s left at this point is to install the new Wilwood brackets and route the lines. When you’re done, the results should look something like this.

16. Reinstall the wheel and marvel at your own mechanical moxie. A lack of time in Mr. Lovell’s busy Vette-fettling schedule prevented us from installing our Wilwood master cylinder and fabricating new hydraulic lines, so we’ll address that final portion of the job in an upcoming issue.