Newsletter
Sign Up today for our FREE Newsletter and get the latest articles and news delivered right to your inbox.
Home
Camaro Performers
How To
Brakes 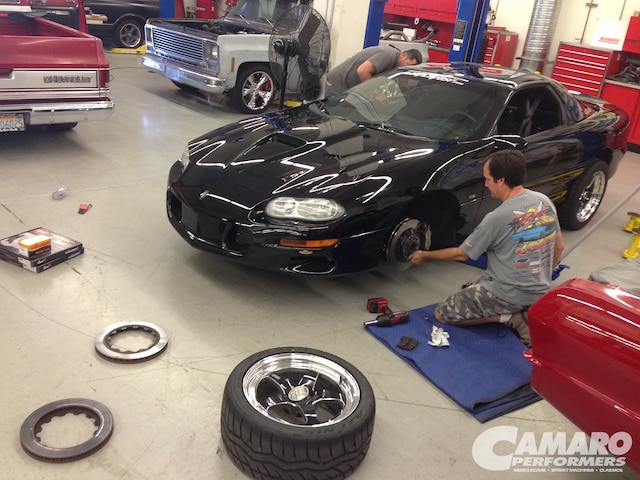 When real racecar drivers hit real tracks they show up with a crew and a bunch of spare parts. Some of these parts are for the breakage that occurs when you’re really trying to win, but many of them are to replace the parts that fall victim to wear and tear.

Such was the case with our 2001 Chevy Camaro Z28 project car we call Black Betty. We run it hard, and as such parts like tires and brakes don’t exactly last a long time. At our last bolt check we noticed that our slotted front rotors no longer were [sloted], so we called up Wilwood and ordered up a couple fresh hunks of circular iron. We also decided to try out their newest compound formulation of the BP-20 street/track pad that we had been running.

Brakes eventually wear out, and if you run super aggressive brake pads then they wear down even faster. After a couple of years’ worth of hard stops, the Wilwood rotors on our 2001 Chevy Camaro Z28 project car were getting a bit thin. In fact, you can barely see the slots on the old rotors.

The Wilwood rotors are directional due to not only the slots, but also the cooling vanes in the rotors. To keep mistakes to a minimum Wilwood is nice enough to cast direction arrows right into the rotor face. The GT-72 curved-vane 14-inch rotor is designed to absorb, and shed, the tremendous amount of heat generated during repeated hard braking. Part of this thermal efficiency is due to the thick 1.25-inch rotor which is cast from premium, long grain carbon iron.

If you want your life to be a lot easier, and your arm a lot less tired, then use an air, or electric, impact wrench to remove the 12 12-point fasteners that secure the aluminum hats to the iron Wilwood rotors. After mating the old hat to the new rotor, and starting the bolts by hand, we tightened them down to 155-inch-pounds. We also dabbed each fastener with a little red thread locker.

We also took this moment to upgrade our brake pads to Wilwood’s newest formulation of the BP-20 pad, which is formulated to work great on the track as well as the street. If you need more grip they have a BP-30 pad, but it’s recommended for track use only.

A set of C-clamps worked great for pushing the pistons all the way back into the calipers. This is necessary when swapping to a new rotor or adding new pads. In our case we did both. We were then able to install the new pads in the calipers and slide them over the fresh rotors. The last step was to hit the road and bed in the new equipment. The basic procedure was to gradually build up head by performing a series of light deceleration cycles. In between each light brake his we let them fully release before repeating. We then repeated with medium application of the brakes. Lastly we did 8-10 hard decelerations from 65ish mph down to 25 mph. Again, between each hard stop we rolled for a bit to make sure the pads fully released before slamming on them again. Once done we drove around, trying not to use the brakes, until they cooled down a bit. For step-by-step instructions on bedding you can hit up Wilwood’s website.

Learn two ways to keep your LS engine from going lean and get the update on our Project Black Betty, a 2001 Chevrolet Camaro Z28.