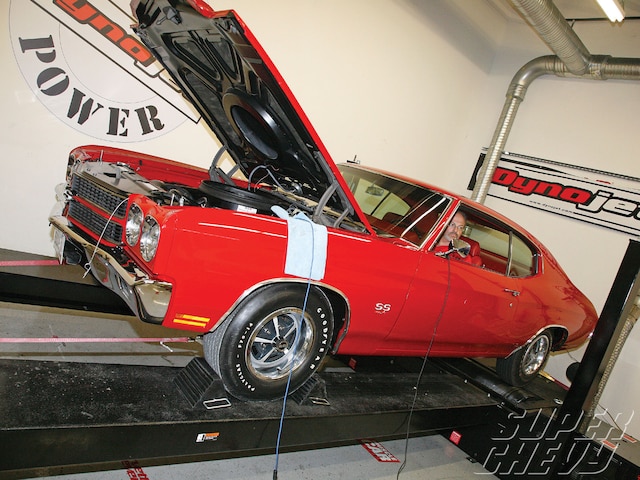 From 1955 to 1972, Chevrolet was the 800-pound gorilla on the new car performance scene. It moved iron by the millions, and during that period created more classic automobiles than all the other brands combined. Whether you are talking about looks or power, Chevy had the whole combination. Sure, once in a while someone would unleash a race car with license plates that could give the Bow Tie guys a run for their money. But the masses knew, if they wanted reliability, comfort, and the most bang-for-their-buck, the closest Chevy dealership was the place to shop.

Over time these cars became legendary, and like most legends their stature grew to epic proportions. Going back through yellowed magazine pages is a grand undertaking that takes an objective eye to separate the hyperbole from reality. Beginning with this article, we are starting a new series in Super Chevy. The goal is to see how some of these amazing vintage supercars actually perform in bone-stock trim on a modern chassis dyno.

When you read this and future stories in the series, keep in mind that prior to '72, GM rated its horsepower and torque in gross numbers-that's an engine on a dyno with no accessories hooked up, open headers, and maximized carb and ignition tuning. Some of the numbers on the following pages may surprise you, but we present them strictly for the sake of science.

For a baseline vehicle, we used Project Homewrecker, a '72 Corvette with a 383. We thought it perfect for the job since we had engine dyno numbers similar to gross measurements, but had yet to test it on a chassis dyno. The stroker is backed by an M22 four-speed and the IRS contains 3.70:1 gears. On an engine dyno with open headers, no accessories, and the same 750 cfm double pumper carb, it put out 425.8 hp and 473.8 lb-ft of torque. On Super Chevy's brand-new, state-of-the-art Dynojet (www.dynojet.com), it made 283 hp at 5,000 rpm and 341 lb-ft of torque at 3,900 (SAE net correction). That's with everything hooked up-alternator, power steering pump and Vintage Air A/C compressor. Eye opening, isn't it?

Got an early muscle car you'd like to have dyno tested for our articles? Shoot us an email at superchevy@sorc.com. Include a photo of the car and all the pertinent info about it.

1970 LS6 Chevelle
Considered to be the ultimate muscle car of the golden age, the LS6 Chevelle was the biggest brute on the streets in its day. Spec'd out by GM at 450 hp, it came with 11:1 compression, rectangular port high-performance heads, solid lifter cam, aluminum intake and Holley carburetor. If you don't count the L72 427's early rating in the '66 Corvette (450 hp), the LS6 would be the most powerful engine to ever make residence between a Chevy's fenders until the LS7 came out in the 21st century Z06.

The example in our test belongs to Bob Phelps. A long-time drag racer, Bob has what could mildly be called a love affair with Chevelles, owning more than a dozen. This original Cranberry Red SS454 car left the Lakewood/Atlanta plant with a TH400 and 4.10 Posi-equipped gears. It has manual steering, and breathes through stock cast iron manifolds, mufflers, and the factory A.I.R. emissions system. This car is pretty much as it left the Denooyer Brothers Chevrolet lot in Kalamazoo, Michigan, in 1970. Recently it scored 997 points out of a possible 1,000 at a show.

"This is as close as you can get to going back in time 41 years," noted Editor Jim Campisano. "The red-on-red color combo made me weak, but it was nothing compared to what happened when I put the pedal to floor. The air-fuel ratio/carb tuning was spot-on and the 454 performed flawlessly-even the choke works. The minute I dropped the hammer, the engine accelerated the rollers with authority."

1957 Bel Air Sport Coupe 245 HP (dual quad) 283
A classic from what can be called the first real year of Chevrolet high performance, the 245 hp, dual-carb-equipped 283 was the hydraulic cammed sibling of the dual-quad, solid lifter- equipped 270-horse 283. Chevrolet had four high horsepower 283s for '57, the 245 hp and 270 hp dual four-barrel engines, and the 250hp and 283hp fuel injected engines. The lower power engines had hydraulic lifters, while the high power motors had solids.

Our dyno mule for this test was Bob Hendryx's Dusk Pearl/India Ivory '57 hardtop. Bob, the founder and president of the Tampa Bay Classic Chevy Club, bought the car back in the '80s, and after years as a driver and custom '57, Bob restored the car to original specs a few years ago. He added a factory A/C system, power steering, power brakes, and some other stock factory options his car didn't originally come with. Backing up the car's 283 is a tough-as-nails Powerglide trans.

We weren't expecting the 283 to rip the dyno from the floor, and overall we were pleased with its performance. The first run was a little lower than the second; that first full-throttle pull through the rpm band worked wonders cleaning the spark plugs and combustion chambers. After that, the Bel Air's 283 started noticeably quicker, idled smoother, and made a lot more power. This was motoring at its finest for a generation of teenagers.

1969 L72 Yenko Camaro
Denying the popularity and iconic status of the '69 Camaro in the Chevy world is like trying to deny the sun comes up every day. It's the car that, short of the '57 Chevy, is the most well-known profile of the Bow Tie line. Inside the '69 Camaro realm, there is a mystique that surrounds the famous COPO cars, and more specifically, the famed Yenko "super Camaros" that rolled out of Don Yenko's Cannonsburg, Pennsylvania, dealership.

This particular Yenko has an even more unusual status-it was the first '69 Yenko Camaro ever built. Owned by John Miller, this Camaro was built early in the fall of 1968, and sent from Detroit by Vince Piggins to Yenko for use in mocking up all the special items being designed for the '69 Yenkos. Watch for a dedicated feature on this historic Chevy in a future issue.

Powering the COPO Camaros that were the foundation of Yenko's cars was the L72 big-block. The 427 debuted in the 1966 model year, and would be top dog until the LS6's arrival. With 425 horsepower in iron block, single carb form, these engines were terrors on the dragstrips, still dominating various NHRA Stocker classes to this day. It used the same solid lifter/dual valvespring combo of the L78, high flowing rectangular port heads, forged rods and 11:1 compression forged pistons.

Since this was the last car we tested (at a shop in North Carolina), we were curious to see how the L72 compared to the vaunted LS6. Both cars had 4.10 gears, which will show less horsepower than, say, 3.23s or 3.08s. But the F-body had the benefit of a manual transmission. Ultimately, it rolled the Dynojet to 2.5 more horsepower than the LS6, and slightly more torque at the peak.