How to tame engine heat with a budget electric fan system

How to tame engine heat on a tight budget 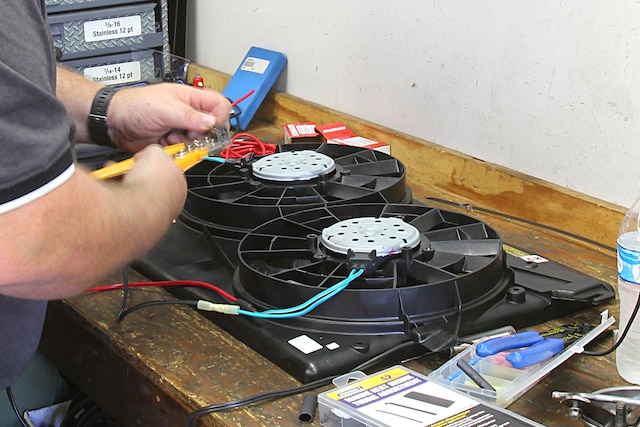 In 1968, the godfather of New Journalism, Tom Wolfe, wrote a book called The Electric Kool-Aid Acid Test that we just had to borrow its title and make our own for this story. But that's where Wolfe's tale and ours conclusively diverge. Our story is all about how to make a big-block El Camino run cooler without spending big dollars. There's nothing wrong with spending four-digit cash for an alloy cooling system, but we prefer to use that now-unencumbered cash to buy more car parts.

Summertime is already here and that means cooling systems will be put to the test. Our intrepid builder is Eric Rosendahl working on his 460ci big-block '66 El Camino that was recently blessed with conversions to both a 4L60E and a Sniper throttle body EFI. He had just added a DeWitts aluminum radiator but it was now time to upgrade to electric cooling fans to replace the large, 17-inch engine-driven clutch fan. The problem was there wasn't room between the water pump and the radiator for a centrally-mounted, single 16-inch electric fan. Eric did some research and ran across information on a dual fan assembly originally intended for a 1995-'00 Ford V-6 Contour that appeared promising.

A couple of items made this attractive. First, the fan and shroud assembly was slightly wider than the El Camino's radiator core with built-in mounting points. This meant that the fans would be able to pull air across the entire radiator core. Second, the assembly was shallow and the fans were offset to clear the close quarters to the water pump pulley. The only way to know for sure was to buy one from Summit Racing and dive right in. What made this decision easier was the fact that this fan system was extremely affordable ... as in less than $140.

Another big reason Eric liked this fan configuration is that both fans were two-speed models. This means that in the low-speed configuration, both fans spin. When additional cooling is required, such as when the A/C is switched on, both fans can be triggered into high-speed mode. The advantage to this is with a vertical flow radiator, both fans are pulling cooling air across the entire face of the radiator.

The concern was, however, that spinning both fans all the time in low-speed might be an unnecessarily high current draw, so we decided to test the fans in both modes of operation. The issue with large fans is not so much the continuous amperage draw, but rather the initial amperage spike. Large-diameter single fans often present a very high initial amperage spike when starting unless an expensive, pulse-width-modulated controller is used. For example, those large Lincoln MKVIII fans can hit the electrical system with a load spike in excess of 45 amps in certain situations, which could cause problems.

Fortunately, we found the initial low-speed amperage spike for this pair of 10-inch fans was only 27 amps with a continuous draw of just over 10 amps, which makes it easier on the charging system. Hitting both fans up to high speed only pushed the momentary spike up to just over 19 amps with the continuous draw of only 15 amps, which was surprising. Many enthusiasts will question the cooling capability of a pair of small fans that draw less than 20 amps. The issue is they equate amperage draw to efficiency, which is not necessarily a true indicator of how well a fan works. It's not the amperage you should be concerned with but instead the total airflow capability.

With the fans mounted in the car, Eric turned to the electrical side of the system. He found a four-relay box on eBay that would accommodate a set of Bosch 30-amp relays. He configured the system to run the low-speed for both fans on one relay using a second to control the high-speed side. This keeps the amperage spikes from possibly damaging the relays. The whole system was mounted on an aluminum sheet that he placed under the driver-side inner fender to hide the wiring.

Eric is using his Sniper EFI system to control the fans using the default numbers in the Sniper software with low-speed on at 190-degrees F and off at 180 with the high-speed triggering at 205 and back down to low-speed at 195. For a carbureted car, the only difference would be the addition of a pair of temperature switches mounted in the cooling system. These temperature switches operate in a similar manner, making a ground connection at 185-degrees, for example, and off at 170, with high side switches generally triggering at 195.

With the fans installed and the wiring complete, we fired up Eric's big-block and allowed it to warm up and the fans triggered at the appropriate temperatures. They didn't quite match Eric's actual gauge temperatures because these two sensors differ by a few degrees, but that's a small point.

A road test confirmed the fan operation and since the installation, Eric has almost a year of cruising and road trips that confirm these fans can move enough air to cool even a stout 500hp big-block Chevy. Control freaks may not be fun people to be around if you don't like being told what to do. But when it comes to street-driven cars, electronic control over things like transmissions, air/fuel ratio, and the cooling system is very much a good thing.

Here's the engine in question, a 460ci Rat that had just been blessed with a Holley Sniper throttle body EFI conversion and a new DeWitts aluminum radiator from Summit Racing. The Sniper has the ability control two electric fans so that was the next step.

Eric lined up the shroud so it was level to the radiator top tank and marked mounting holes. All four of mounting lugs lined up with the mounting flange that was originally for the engine-driven fan shroud. Eric drilled the holes with a cordless drill and it all lined up nicely.

The passenger-side mounting lugs required a 1/2-inch spacer to allow the assembly to sit flat, but otherwise the fans fit really well.

Also note how tight the clearance is to the water pump pulley. This was one of the major reasons for choosing this offset twin-fan arrangement.

Before permanently mounting the fans in the car, we decided to test them for initial as well as continuous amperage draw. In this photo, we are testing the low-speed continuous amp draw at just over 10 amps. This was powered by an Optima battery on the bench at 12 volts. Note that we tested the fans mounted to a dummy radiator to create a more accurate airflow and amperage draw.

Eric found a relay box online that would mount four Bosch 30-amp relays with a nice plastic cover. We used one relay for each fan, leaving two additional relays open for other uses. One was used to create a switched power trigger for other electrical devices.

Eric used non-insulated wire connections and then used shrink wrap around the base of the terminal to give it a professional look. Connectors with crushed blue or yellow insulators look cheesy and non-professional.

Eric also found a plastic box to protect the relay box from the weather and then mounted this on a piece of aluminum sheet bent to mount underneath the driver-side fender opening behind the headlights. This places the relays and most of the wiring out of sight.

Since Eric lives in San Diego, he doesn't have to worry about antifreeze. Filtered water is the most efficient coolant and just needs help with minimizing corrosion. The best anti-corrosion additive we've found is No-Rosion (left) for brass and copper radiators and Hyper-Kuhl for aluminum coolers, both available through the no-rosion.com website.

At highway speeds, the first fan comes on occasionally, reducing the amperage load on the alternator and the Eric reports the engine rarely sees 200 degrees F even in hot Southern California summers.