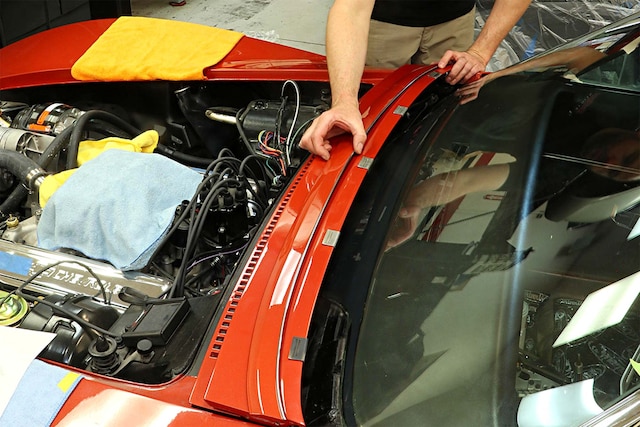 Futuristic innovations were a hallmark of '50's and '60's General Motors concept cars, and Corvette—along with Cadillac—were usually first in line for a GM concept car innovation to make it to the dealer's showroom. In 1968, when the C2 Sting Ray became the C3 Stingray, its design features were heavily influenced by the innovation-packed Mako Shark II concept car.

All 1968 GM cars, with a few exceptions, dropped vent windows in favor of Astro Ventilation and some with hidden windshield wipers. The 1968 Corvette led the way with the most complex vacuum driven arrangement where other GM cars had the wipers hidden under an extended hood reaching rearward over the cowl. Looking back, it's easy to imagine the switch from electric to vacuum-powered actuators was a cost-cutting effort by The General ordering a platoon of bean counters to cheapen things up.

Corvette aficionados recollect hidden headlights on 1963-'67 Corvettes were electric and switched to vacuum assist with the arrival of the C3, but how many remember vacuum assist was rampant in General Motors' 1968 luxury car lineup. You name it, Oldsmobile, Buick, Cadillac the power door locks, remote trunk release along with a proverbial ton of emissions controls and climate control relied on a worm's nest of vacuum hoses strewn end-to-end.

Vacuum actuators were doomed from the start. The year 1968 wasn't over before Sawzall-armed stereo installers cutting speaker holes punctured vacuum hoses then delivered completed installations rife with ticking time bombs. And maybe obnoxious C3 Corvette drivers revving their engines up before turning off the headlights weren't showing off, but were rather generating vacuum. High-performance engines with hot cams produce less vacuum. It's been over half a century since the early C3 Corvettes rolled off the assembly line in St. Louis and the passing of time has taken its toll drying out rubber vacuum lines in the most inaccessible of places.

It might sound odd to those that weren't born at the time, but a common cure for 1968-'72 windshield wiper problems was to find a '73 hood with its rearward cowl overhang eliminating the pop-up wiper door (cowl panel). Faithful readers of Vette will recognize the Corvette Bronze '68 shown as an ongoing project from the ground up to a completed restoration.

A restoration with most of its upgrades undetectable to the eye or not visible without lifting the car in the air or opening the hood and really scrutinizing. To cure the problem of the vacuum-operated wiper door and offer a vast improvement over the performance of stock '68 windshield wipers Hot Rods by Dean installed a Detroit Speed Inc. Selecta-Speed wiper kit with wiper door. The Detroit Speed Selecta-Speed kit bolts directly in place and is reversible in case the next owner is a masochist and wants to return to stock.

In comparison to a modern-day Corvette, the old Vettes are spartan as spartan can be but there are ways to bring modern convivences. Detroit Speed's Selecta-Speed wiper kit is analogous to putting an overdrive unit on the back of a two-speed Powerglide, adding five more gears, and a shot of nitrous thrown in for giggles. Quoting Detroit Speed's description, "The wiper kit contains a low profile, seven-speed wiper motor with five delays, low speed, and high speed, rotary switch, adapter plate and wiring harness. The CNC aluminum adapter plate mounts the wiper motor to the stock firewall bolt pattern and requires no permanent modifications to the vehicle. The supplied wiring harness uses the factory wiper grommet opening and requires no cutting of the factory harness. This allows owners the option to return their classic Corvette back to its original configuration if desired, leaving no holes or spliced wires behind."

No matter how one looks at it, whether they're upgrading a stock 1968-'72 Corvette to become a modernized, more practical driver or for the customizer in search of cleaning up the firewall and underhood area, the Selecta-Speed wiper kit solves both problems. Vette

The Detroit Speed Selecta-Speed wiper kit installed with the wiper door (cowl panel) flush in the wipers' off position and is undetectable from the original vacuum actuated system.

Bolted to the birdcage, the wiper control module mounts under the dashboard. Notice the American Autowire main harness is an exact reproduction of the factory original harness.

The Detroit Speed windshield washer pump kit is an under $50 option that supplies washer fluid to the wiper blades, cycling three times—the same as a 2019 Corvette.

The best results for duplicating factory routing for EC Products Design E10433 windshield washer hose kit is to remove the old hoses and replace with new following the original route.

Indicated by a green stripe, the windshield washer feed line enters at the top of the firewall and fits through a plastic grommet.

The Selecta-Speed windshield wiper motor is more compact than original, providing a cleaner look and more clearance for parts surrounding the firewall.

Once the wiper door linkage (mechanism) has been removed, check that the moving parts aren't rusted stiff and operate freely.

The first step was to drill out two mounting holes for countersunk screws on each side, four in all—driver and passenger side.

The countersunk socket cap screws allow the bracket to bolt up flush and mount as original.

Locknuts on the inside secure the wiper door motor to the OE bracket.

Now unnecessary, the linkage needed to actuate the vacuum actuators (motors) were drilled out.

After drilling out and separating, the linkage was discarded, providing a pickup point for connecting the gold cad plated clevis.

Supplied with the Detroit Speed kit, two nylon bushings—one for each side—were pressed by hand into the arms on each side.

Here's how the completed installation of the Selecta-Speed wiper door electric motor appeared. With both wiper door motors installed the wiper door linkage was ready to bolt in place.

Here's the before shot with the linkage needed to operate the OE vacuum actuators in place.

And the after shot where the firewall is cleaned up with a DSE blanking plate in place.

Fancy parts are great, but if you’re on a budget you need to be creative. We install a budget cooling system on an early Chevy