Ditch the outdated wiper system in your Tri-Five Chevy and upgrade to a better looking and functioning system! 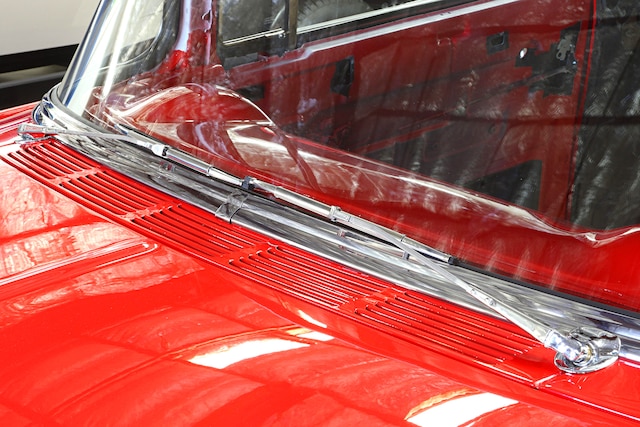 We love our Tri-Five Chevys, but our attraction to the most iconic Chevys of all time is all about styling, not so much the mid-’50’s technology they embody. But, thanks to technological evolution and the aftermarket, we can have the timeless lines along with modern performance and amenities. Air conditioning, power windows, fuel injection, and many other upgrades are easy to graft into our classics.

Take windshield wipers, for example. What came on these cars in the ’50s worked, but the system was bulky and, by today’s standards, outdated. The system, with its center firewall mounted motor, was also pretty ugly. There was a time where the only option for those wanting to smooth and declutter their firewall was to forego wipers entirely.

The Raingear wiper system lets you have your proverbial cake and dine on it as well. It locates the wiper motor under the dash and out of sight. In this location you get all the functionality of wipers as well as a super-clean, and clutter free, firewall.

The kit runs around $500 with a standard two-speed motor. If you want the version that has delay functions it will cost you another $50. Keep in mind that this is a complete system with the motor, wiper transmission, hardware, and wiring. In fact, the only part of the wiper system you’ll need are the arms and blades. They also offer a washer kit for an a few more greenbacks.

We have a 1956 210 project and wanted to ditch the firewall-mounted wiper motor. So, we picked up Raingear’s system that’s tailored for ’55 and ’56 Chevys. If you have a ’57 they make a kit for those as well. So follow along as we bring our Chevy’s wiper system into the 21st century and, as a bonus, declutter our firewall a bit.

The Raingear kit included everything needed for the install and was specific to ’55 and ’56 Chevys. The parts included the drive unit assembly, pivot shafts, drive arm link, bridge, motor plate, motor, motor spindle, motor brace, firewall cover plate, wiper motor wiring harness, and all of the required grommets and hardware.

Our ’56 had recently been painted, which made the stock wiper arms studs an even bigger mess.

Normally, you would use the included wiper nut tool to remove the retaining nut, but in our case we had to scrape off some of the built-up paint first. After some effort we had the nut freed from the shaft.

1956 technology was creative. The ’56 used a wiper motor mounted in the center of the firewall, which worked a cable and pulley system to each of the wipers. Over time, the cables tended to stretch, which caused wiper issues. But, it’s 2019 and there’s a better way.

There was no need to save the old parts so we just cut the cables to hasten the removal. This does give you an idea of the somewhat cumbersome system. You can also see the included Raingear block-off plate that will be later used to cover up the hole from the old wiper motor.

With the old mechanism removed we were left with a clean slate in the cowl for the new Raingear wiper system.

The main wiper motor and mechanism mounts under the dash to the left of the steering column. To make room, the brace on this side was removed.

With the brace removed we were able to install the main Raingear unit under the dash using existing pickup points (5/16-18x1/2-inch hex bolt to the steering column support location). If you are installing an aftermarket wiring system, such as one from Painless, then it’s best to install the wiper system first so you can make sure you don’t mount the new fuse box in the way of the Raingear assembly.

The main unit actuates the driver-side wiper. To work the passenger-side wiper we installed the included transfer bar under the dash, which tied the passenger wiper shaft to the main drive unit.

Back outside the ’56, we secured the new driver-side wiper shaft using a rubber washer, aluminum spacer sleeve, and a small brass nut. The brass nut was snugged up using a 3/4-inch socket.

This locked our new Raingear wiper shaft in place. We then repeated the procedure on the passenger side. At this point our system was fully mounted to our ’56.

When we started this project our ’56 didn’t have its windshield yet so we had to wait a bit to finish the installation. Once the windshield was in we put our new Danchuk escutcheons in place and secured them with the chrome nuts, using the same tool we used to take it all apart, from the Raingear kit.

The last piece of the mechanical puzzle was installing the new stainless wipers (PN 2518L & R) and chrome arms (PN 10137) from Danchuk.

The passenger side was installed and lined up correctly with the driver side arm assembly. We only put these on temporarily so you could see how they mount. Once we have power to the car we will remove the arms follow the instructions from Raingear on how to confirm the blade and shaft position.

Of course, none of this works without electricity and a way to control it. Our kit included a two-speed, with delay, wiper control switch. Wiring this in was straightforward and the wiring diagram provided by Raingear is easy to follow. The switch does have a push function to activate a washer pump (sold separately). We will mount this switch when we get around to installing our new Painless wiring kit. If your car is already wired then it’s suggested that you wire the switch before installing the mechanical bits.

Check out this comprehensive look at an install of a Vintage Air SureFit climate control system into a 1968 Camaro.