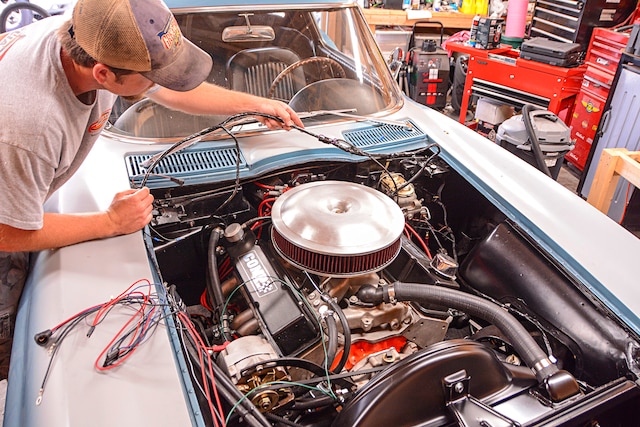 Our 1964 Corvette coupe has been through a lot of changes in its lifetime. It’s had five engines, at least three transmissions and several paintjobs. But one thing that hasn’t been replaced is the original wiring harness. Although the lifespan of a wiring harness is way less than 50 years, that is about how long it took for ours to start showing signs of disrepair.

It started with a glitch while cruising down the highway. A brief loss of power that was puzzling, but it fired back up and we went on our way. The next time it happened, it required some wire-wiggling under the hood to get it back going. We found that wiggling the bulkhead connector helped restore the power, but even that eventually stopped working. According to the Internet, we had a case of “Red Wire Syndrome.” Don’t worry if you’ve never heard of it.

As it turns out, Red Wire Syndrome is just a name that was coined on an Internet forum, but it’s a very real problem for C2 Corvettes. The issue is the main red wire that comes out of the bulkhead connector on the firewall. This red wire goes to the horn relay, which acts as a junction point for the wires that go to the starter, voltage regulator and alternator. Over time, the terminal corrodes and causes the wire to heat up. In our case, the wire got hot enough to melt the socket on the plastic connector. This is obviously a concern.

One way to cure Red Wire Syndrome is by replacing the engine wiring harness, but you can also hard wire the “red wire” (bypassing the bulkhead) to eliminate the problem. We chose to replace the engine wiring harness with a new Lectric Limited harness sourced through Paragon Corvette Reproductions. The harness is built with original-style connectors and it’s designed for original cars. With that in mind, we made a few modifications to work with our electronic ignition and our Powermaster one-wire alternator. It was also a good time to slide a new Optima RedTop battery into place for a long-lasting supply of power. It took us a few hours to upgrade the charging system and replace the engine wiring harness, and it was well worth the effort as our Red Wire Syndrome is now something of the past. The car’s electrical gremlins are gone, and we’re back on the road with confidence. Vette

Complacency can be the source of major problems in an old Corvette. We had neglected the engine wiring harness and charging system in this 1964 Corvette for far too long. Even the alternator plug-in was suffering with wires that were barely hanging on.

With a driveable project car, wiring tends to take a back seat, especially if the electrical system is seemingly “fine.” After an intermittent power loss caused us to seek the problem, we found that wiggling the bulkhead connector restored power.

We removed the bulkhead connector to inspect the connections to find a melted connector. After some research, we realized our car was suffering from “Red Wire Syndrome,” a condition in which the main power wire connection becomes corroded, causing it to build up heat and eventually corrode to the point of power loss.

After we started removing the car’s original engine wiring harness, we noticed other areas of concern. Check out these starter wires. The connectors are in bad shape, with the wiring insulation crumbling and leaving bare wires exposed. This is common for a car that’s had a bunch of engine swaps over the years, but it’s in dire need of repair.

The fix comes by way of a new Lectric Limited wiring harness from Paragon Corvette Reproductions. The wiring harness is built to factory lengths and features original-style terminals for a simple installation.

Our first step is to lay out the wires and determine the appropriate home for each connection. It’s important to note that cars with factory air conditioning require a different wiring harness. Since our car has an HEI distributor and a new Powermaster one-wire alternator, we have the opportunity to remove a few wires.

The pink and black wire is used to reduce voltage for points ignition systems. This wire runs from the bulkhead to the voltage regulator, then another pink and black resistance wire runs from the starter solenoid to the positive side of the coil. With an HEI distributor none of these wires are necessary so they can be taped up or removed completely.

Unwrapping a brand-new engine harness can be a bit unnerving, but we wanted to access the series of wires that connected the original external voltage regulator and alternator. Our Powermaster one-wire alternator features a single power wire that runs from the alternator to the battery, so the majority of these wires can be removed.

From the group of wires that fed the original charging system, the only ones that we kept were the horn connector and a three-wire bundle, which is joined by a spade connector that connects to the horn relay. The two red wires are important, one comes from the bulkhead and the other goes to the starter, using the horn relay as a junction. This is your main power supply.

The Powermaster 140-amp one-wire alternator is a simple install. It bolts in place of the original unit, but it does have a different size pulley, so we grabbed a new belt at the parts store. Otherwise, it was a direct replacement for the stock piece.

Wiring the alternator couldn’t be simpler. The charge wire is available from Powermaster in several lengths and gauges. Since the alternator is on the passenger side of the car, near the battery, we gave Powermaster the approximate dimensions and they sent us four feet of 6-gauge charge wire with correct 5/16-inch terminals already installed.

The other end of the charge wire connects to the positive battery terminal. We simply removed one of the terminal clamp bolts, cleaned the surface and slid the bolt through the ring terminal before re-installing it.

After we buttoned up the wiring modifications and re-wrapped the harness, we made the simple connections to the heater blower motor and, finally, the main bulkhead connector could be snapped into place.

To keep a steady supply of voltage, we used an Optima RedTop battery. It’s a high-performance AGM battery, meaning it will last longer and provide more power to our electrical system than our standard battery.

In addition to the Optima RedTop battery, we snagged a new Optima Digital 400 12-volt Performance Maintainer and Battery Charger. It’s small and super easy to use, whenever we need it.