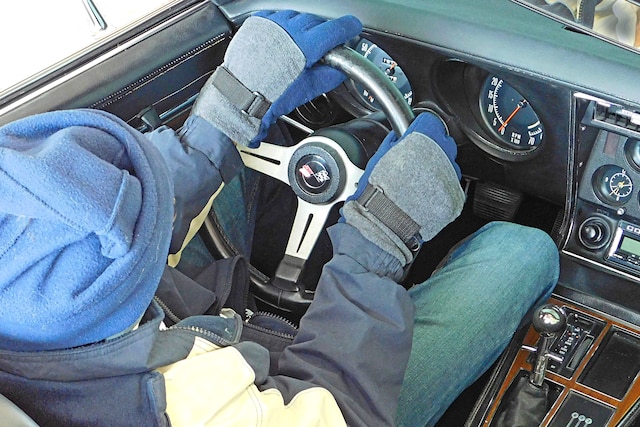 It’s all about control. Harnessing fire was a pivotal achievement by humans in controlling the environment. And that’s what we’re talking about, control of the heat in the Corvette cockpit. Getting heat when wanted is just part of the goal; controlling where it goes and keeping heat out when not wanted is just as important.

The first signs of a heater core failure are unexpected fog on the inside of the windshield, dampness on the passenger-side carpet and the dreaded sweet/sticky smell of antifreeze. Many owners simply disconnect the heater core. However, even if you only take your Corvette out on nice days, you’ll certainly wish the heater core was connected and your defroster was working when the windows begin to fog up. Plus, a fully functioning heater expands the number of hours and days when you can enjoy driving with the top down or T-tops off. It may also prevent a frosty reception from your passenger.

In these articles, Vette will show how to replace the C3 heater core and the evaporator, two items of core value in controlling your car’s interior environment. Part 1 details the steps and provides tips on installing a new heater core in an air-conditioned C3 Corvette. Resealing and testing the operation of the heater box is also shown and is of equal value to non air-conditioned cars. Part 2 covers the other task that owners often put off: replacing the evaporator. One modification can make that procedure significantly easier—more on that in Part 2. Now, let’s get to the core problem.

1. The project starts with draining the coolant. Use particular care when removing the drain plug from the bottom of the radiator. If it’s very tight, don’t force it or you could tear the radiator tank and thereby create a lot more work. If it is too tight, disconnect the lower heater hose instead. Also, be aware that some coolants can be poisonous when drank by pets.

2. Tip: apply an antiseize compound or Teflon tape to the threads on the drain plugs in the engine block and in the radiator. This helps to make a better seal, requires less torque and makes sure they come out easily next time.

3. Remove at least one of the drain plugs in the engine block to more fully drain the coolant if you are replacing it. On small-blocks, these drain plugs are hidden behind the spark plug wire shields. Loosen the rear motor mount bolt with a 9/16 flex socket, the rear shield bolt with a 7/16 socket and then swing the shield away enough to access the plug.

4. The hoses connect to the heater core in a fairly hard-to-reach area on air-conditioned cars. They need to be accessed from under the car. Tip: if the car has a splash shield, removing it provides better access to the hose clamps. Note the sharp bend these hoses must make.

5. Slit the hoses lengthwise with a razor blade or utility knife and then peel the hose away from the tubes to make removal easier. It is especially important to not put too much force on the brass tubes if you’re just changing the hoses and not the heater core.

6. This replacement heater hose set from Corvette Central has the sharp bends preformed on one end of each hose and a smaller preformed bend on the 5/8 hose where it connects to the intake manifold. Preformed hoses are strongly recommended for this application; conventional heater hoses can’t handle these bends adequately. These Corvette Central hoses also have the original markings and ribbing.

7. Remove the nut from the upper right corner of the evaporator housing. This is undoubtedly the easiest fastener to remove for this project and it’s the last one under the hood. The rest of the disassembly is from the interior of the car.

8. To access the heater box, remove the sill plate, the right dashpad, the right kick panel, the shifter console access panels, center gauge cluster and radio in that order. Detailed information and tips on removal of these parts can be found in the recent Vette article “High-Tech Tunes.”

10. Peel the carpet down if necessary and then remove the two screws on the lower side of the heater box. A lower brace rod may have to be removed for better access to the screw on the left. Remove the final screw that attaches the box, located on its upper right side.

12. Remove the bowden cable from the heater box. Either mark or photograph the location of the adjustment screw on the cable. This is important because it controls the door that shuts off air from the heater core.

13. The vacuum hoses that go to the actuator become visible as the right end of the heater box is pulled away from the firewall. Remember that the hose with a red stripe goes through the rubber grommet and into the heater box.

14. After removing the two vacuum hoses, the heater box is ready to be removed from the car. Tilt the heater box out at the top and then lift the right side upward until the heater core tubes clear the firewall.

15. Tip: check all the vacuum actuators before going any further. Either use a 1/8-inch hose to test for leaks or push the actuator rod to one side, seal the port on that side with your finger and then try to move the rod in the other direction. The rod should not move until you release your finger.

16. Also check the rubber seal on the Hot-Cold door in the heater box. This prevents hot air from the heater core from blowing onto you when it’s not wanted.

17. Remove the two screws from the bowden cable bracket to enable it to be moved up and off the door’s shaft. This is necessary because the door needs to slide out of the heater box when the heater core assembly is removed.

18. Remove the firewall gasket from the heater box to uncover the screws that hold the heater core assembly to the box and then remove the screws.

19. Gently pry the heater core assembly away from the box. Tip: insert a scraper or putty knife around the perimeter of the box to break the sealant loose. Be careful not to crack the box flange.

20. The heater core is held in place by a bracket on each end. Tip: an aftermarket heater core may be slightly thicker or thinner. There’s sufficient room in the heater box so this doesn’t affect its performance but it may require longer screws if the core is thicker.

21. The long heater core tubes are secured to the assembly by a bracket. It may be necessary to gently bend the tubes to fit properly.

23. Corvette Central’s 23-piece air-conditioning/heater gasket set includes the foam and felt gaskets for the heater box and all the air ducts. It also includes a roll of sealer for use on the heater core assembly and the evaporator housing.

24. Glue the foam gasket to the heater box to keep it in place during installation. 3M’s weatherstrip adhesive or a similar product works well in this application. Apply a bead to both the gasket and the heater box, wait a minute and then press them together.

25. Start the engine and move the thumb wheel over to Defrost to make sure that the actuator is working properly. If a strong stream of air is not getting to the windshield, this is the likely culprit. The time to replace this actuator is definitely now when the center gauge cluster and radio are out of the way.

26. Attach the bowden cable and adjust it if necessary to make sure the door fully closes when the thumb wheel is rotated up to its cold (C) position. Attach the vacuum hoses to the actuator and then rotate the heater box up into position. Install the nut in the engine compartment to hold the box in place before installing the other three screws.

27. Reattach the hard plastic duct manifold to the heater box. Note the new foam gasket on the box that seals to the center air duct. Tip: apply duct tape to cover the gap between the manifold and the defroster duct to increase airflow to better defog or defrost the windshield.

28. Reinstall the center air duct. Only one screw attaches it to the heater box. Tip: on convertibles, it may help to insert the left side of the duct under the brace rod and then push the duct up into position. Note the new felt gasket on the center duct.

30. Back underneath the car; insert a round tool into the heater core tubes to gently bend them into position if necessary. In this case, one tube was too close to the shield stud.

31. Install the new heater hoses. The 3/4-inch hose was a bit too long and was hitting the sharp edge of the shield so we trimmed the hose by about an inch. Tip: position the hose clamps so that both are accessible after the second hose is installed. Hex-head clamps and a 1/4-inch flex will help if tightening is necessary in the future. Add coolant, warm the engine and check the level again. Now the heat in your Corvette is under your control.

32. Today, there are many antifreeze choices. I prefer the original green ethylene glycol for older Corvettes, but others have used the extended-life yellow “global” coolant successfully. This green concentrate antifreeze is available from NAPA but call first to assure that your store has it in stock. Tip: use distilled water (not spring water), typically mixed 50/50 with antifreeze concentrate.

33. Corvette Central offers new heater cores and hundreds of other heating and air-conditioning parts. The long tubes going straight down on this heater core identify it as being for a Corvette equipped with air conditioning.