The rust is there … how to get rid of it 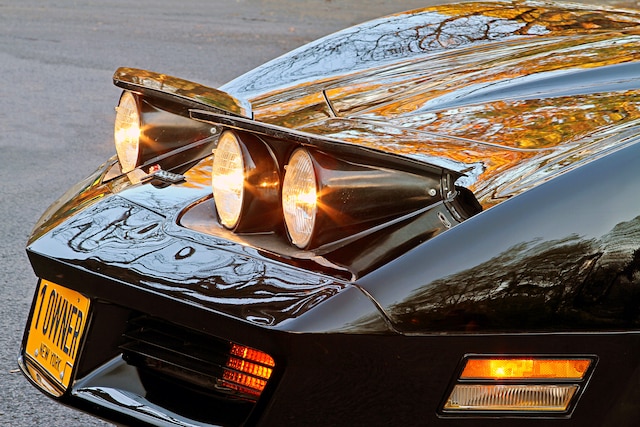 Out of sight, out of mind is a timeless idiom with a tremendous amount of truth, especially when it comes to vintage Corvettes.

Thanks to the corrosion-proof fiberglass body, it’s all too easy to forget about rust eating away the steel components under the skin, where dozens of support brackets, reinforcement bars and more contribute to holding everything together. On C3 models, one of the most important metal parts is the front hood/surround reinforcement bar that not only lends structural reinforcement, but also serves as a mount for the headlamp supports, which hold the headlamp housings.

In fact, headlamp doors that appear sunken in the openings and/or crash into the rear edges of the openings are telltale signs the reinforcement bar has deteriorated.

“As it rusts, the metal of the bar starts to swell, pushing the supports lower into the body,” says Werner Meier, of Masterworks Automotive Services, near Detroit. “They can really get bad and start to disintegrate, which results in the housings being too low in the openings.”

The only solution is replacement of the reinforcement bar. Fortunately, it’s an inexpensive, reproduced item with the versions offered through most parts houses such as Mid-America Motorworks, Corvette Central, Corvette America and Zip Products made with original tooling. That’s the good news.

Getting to the bar and replacing is a little tricky, at least with the nose still attached to the chassis. It’s located between the headlamp openings and the front edge of the hood opening; and is bonded to the fiberglass. Removal of the headlamp housings is obviously a must, which is a project in and of itself. After that, it’s relatively easy to pull off a severely rusted bar, but prepping the surface and installing the new one isn’t ideal, given the limited access to the underside of the nose.

“We’ve done plenty of them with the nose on the car,” said Meier. “It’s a little tough to work upside down, because that’s how you get at the bar. But as long as you get the old bar removed and clean up the surface for the new part, it’s doable.”

The easier way is to replace the bar with the nose off the car, which was the method Masterworks employed on the ’74 Corvette project we followed recently. And because a rusted reinforcement bar all but ensures many of the other brackets under the body are corroded, too, it’s a good opportunity to inspect and replace them as necessary.

“This is one of those projects that’s best addressed as part of a larger restoration or repair of the vehicle, because with the work involved to get at the reinforcement bar, you might as well attack other related repairs or upgrades,” says Meier. “This repair, however, will return headlamp operation to like new.”

In the grand scheme of things, it turned out to be a comparatively easy and straightforward sub-project on the broader restoration of the car, taking less than two hours to complete—at least to the point where the new bonding material was affixed and left to cure for about 24 hours.

After that, there was more work to be done on the car’s nose, but the new reinforcement bar put the rust issues at bay and laid the groundwork for interference-free headlamp operation. Vette

1. Here’s the problem. The headlamp door has sunken into the opening of this C3 Corvette, thanks to the rusted reinforcement bar on which the headlamp housing is mounted. Chips and cracks around the opening indicate the sagging housing has started to interfere with the nose when opening. It’s something to be wary of when inspecting a C3 for sale.

2. The project car for this story is a restomod ’74 Corvette with an LS swap and the need for some serious bodywork and rust repair. Despite the fiberglass bodywork and often limited use during the winter months, C3s from “moist” states are likely to suffer from rust issues for the underlying structural elements.

3. A used, replacement front end was located for the car. The fiberglass was in relatively good shape, but much of the steel structural components under it were rusted. The headlamp housings, which were barely hanging on to the corroded reinforcement bar pretty much fell out of the nose.

4. A closer look the openings’ edges shows scratched paint and some cracking that are hallmarks of the rusted bar.

5. The bar is bonded to the nose’s fiberglass, so its removal starts with a heat gun, which is used to heat up the original bonding glue. A putty knife, too, can be used to work into the heated adhesive.

6. Then, a pry bar or a similar tool is used to slide between the bar and the fiberglass, separating them. It’s not a difficult task, but care must be taken to avoid cracking or damaging the surrounding panel.

7. A look at the original bar next to the replacement shows the severity of the corrosion—and the hidden rust lurking in many vintage Corvettes. The new bar came from Zip Products, carrying a price tag of only $110.

8. Preparation of the bonding surfaces is the first step in the installation. Remnants of the old glue are ground away to ensure a smooth mounting surface. The surface should be scuffed well, with 30- or 60-grit paper. Wearing a respirator mask is a must here, as the task stirs up plenty of fiberglass dust.

9. With the old glue and dust wiped away, the new bar is simply laid in place to check its fit and positioning prior to bonding it in place. With the reproduction part manufactured with GM’s original tool, it fit like a glove.

10. The bonding surfaces on the bottom of the bar are then scuffed up with 60-grit paper to give them a better adherence surface. The bonding adhesive needs to grab the material to hold it tightly, which it can’t do adequately with a smooth surface.

12. Similarly, the mounting areas on the nose also are coated with the adhesive.

13. A small paint bush is used to spread the adhesive on the fiberglass and the reinforcement bar. Besides ensuring complete coverage, it helps eliminate air pockets.

14. The bar is then carefully lowered into place. A little hand pressure helps seat it and work out air pockets.

15. Large clamps are used to hold the bar in place while the adhesive cures. Four clamps were used to ensure even pressure in the center as well as the outer edges.

16. The adhesive cures completely after about 24 hours, making the bar ready for mounting the headlamp housings.

17. But this C3 still has a long way to go before it’s ready for the headlamps. There’s more bodywork and painting to do, but there are no more rust issues under the skin.

In this feature article VETTE takes a look at Vince Gabrunas' 1974 Chevrolet Corvette Stingray coupe, which stays true to its performance roots as a dedicated autocrosser - Vette Magazine

The 1974 Chevy Corvette model year marked the end of the line for both the topless C3 and the big-block-powered Corvette, potentially enough to make this cannily optioned shark a bona fide collectible, if not a full-blown dream machine. - Vette Magazine

Check out this 1974 454 Corvette Coupe! It is fully loaded and equipped with a 454 big-block engine! It also features a fresh paint-job, a fully-restored interior, and much more! Check out the details and pictures at Vette Magazine.

This 1974 Chevy Corvette has been fully restored and fully equipped with the latest in Corvette aftermarket technology. It features a Hurricane Superduty 700-R4 automatic transmission, a ZZ3 350 HO crate engine, over 340 horsepower, and much more! Check out the details and pictures at Vette Magazine.

A Cool Convertible is the Perfect Ride when Things get Hot!

The Connolly family had their mother, the driving force behind their project, taken away, but now with a new purspose they continued the 1974 Chevrolet Corvette build in the memory of their mother - Super Chevy Magazine