Converting the Door Locks to Electric Operation in Scarlett, our 1972 Corvette Project Car 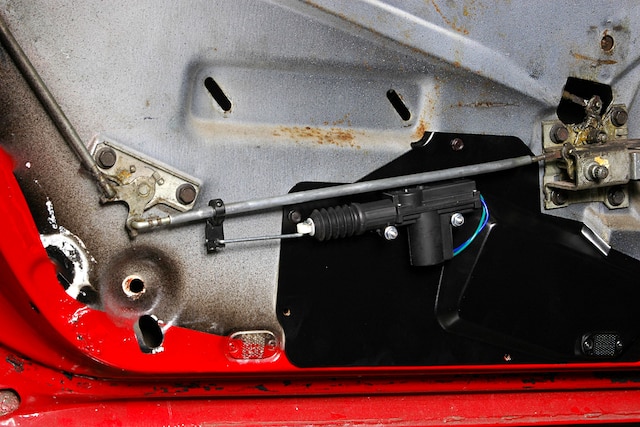 We’ve spent quite a bit of time on Project Scarlett, our 1972 coupe project car, converting her from a mild cruiser into a track-capable, 600+ horsepower beast. In order to keep the car relatively comfortable to drive on the street we’ve added Vintage Air, seat heaters for our Corbeau A4s, electric windows and now electric door locks. While we’re pairing the locks with a remote entry and security system (which we won’t detail in print for obvious reasons), the system can be installed for convenience alone, and controlled with a simple toggle switch without the need for anything more extensive.

The kit was sourced from Petris Enterprises, which has long installed electric locks as an option on customer cars, but only recently began to offer a separate kit for sale. If the name Petris sounds familiar, it should: an ASE Master Certified Technician for over 20 years, Chris Petris is a well-known Corvette writer and has authored books on both mid-year and C3 restoration.

You’ll start by removing both door panels and kick panels, and whatever console piece to which you choose to mount the operating switch. The system works by mounting an electric actuator to the window regulator access panel located on the lower portion of each door. Since the steel access panel serves as the foundation against which the actuator works, it stands to reason that the screw holes on the door panel onto which it mounts must be in good shape. If they aren’t, you’ll need to do some remedial work to repair them. Now is a good time to mention that it may be hard to do this installation without doing a complete restoration of the door mechanism. No matter the condition of the access panel, expect the lock rods to be in sorry shape and the various mechanisms to be full of 40+ years’ worth of hardened grease and debris. It’s hard to put it all back together like that without cleaning, repairing or replacing it all.

In our case, the driver-side access panel was in good shape, but the passenger-side was missing entirely, as were some of the bolts that should have held the panel in, so we’ll be purchasing new bolts from Corvette Central. We also went ahead and bead-blasted the panel and repainted it, but we found the factory paint was difficult to strip, even with the blaster, so if you plan to do it by hand with sandpaper set aside a good amount of time and get ready for hand cramps. Likewise, drilling the holes took some effort and nearly cooked our drill bit, but persistence gets it done.

The wiring is routed almost identically to the electric window harness we previously added, both plugging into the main fuse block and being routed through rubber conduit that goes between the door and birdcage in the hinge area. While we illustrated the harness plugged into the fuse block, as it’s by far the simplest installation, it makes more sense for us to plug the harness into one of the auxiliary fuse boxes we added beneath the parking brake console. We also chose to add a ground position on the birdcage rather than reusing the factory ground screw, which we’re probably close to overloading anyway.

Once the mechanical work is done and the wires run, to operate the locks with a simple switch you’ll first need a source of 12v power that should be fused at 3 amps (inline fuse holders are helpful for this sort of installation for those who aren’t eager to spend hours fashioning their own wiring harnesses and fuse blocks). The switch should be a momentary switch with two “on” positions. These are usually described by sources such as Waytek or Mouser as (ON)-OFF-(ON), with the parentheses indicating momentary activation rather than a switch that stays on when moved to that position. There are many, many options, from toggles to rockers, so choose whatever fits the aesthetics of your interior. Since Scarlett has been inspired by period race cars, we’re using a chrome toggle switch in addition to using the security system to control the door locks.

And with that, at long last it’s time to consign Scarlett to the deep hibernation we call paint jail. We hope you’ve enjoyed the project as much as we have, and we’ll look forward to seeing you out there. Vette

1. The electric door lock kit from Petris Enterprises includes a wiring harness, a pair of electric actuators and all the hardware to mount them. The only thing not included is a switch so you can choose to install a toggle switch or integrate the locks into a remote entry/security system.

3. To start with, you’ll need a basic understanding of how the door mechanism works. In this photo both the door panel and the window regulator access panel have already been removed and you can clearly see the lower, horizontal door lock rod that goes from the internal door lock knob (which fits on the splined stud on the lower right) and connects to the upper lock rod on the left that controls the external door lock.

4. The lock rods are held in place with these clips, which are either left- and right-hand and cannot be interchanged. Removal isn’t complicated, but the accumulated gunk of the ages may make it hard. Pry the two fingers off the lock rod, rotating the clip around the axis of its loop end. Once it’s rotated up, the rod may be pulled free.

5. Scarlett’s lock rods were in sorry shape—note that both the adjust elbow and the tube itself are bent. We straightened them in a vise and ran them through a solvent bath before we could even slide the linkage adaptor into place. Even so, they’re slated for replacement.

6. The linkage adapter is clamped in place on the actuator rod. Once the system is fully installed, the clamp location will need to be adjusted to make sure the electric actuator doesn’t bottom out in its travel.

7. The actuator and clamp assembly installed on the door. There’s not a front or rear to the clamp but the smart move is to orient it where you can easily get a hex key on the clamp to tighten it once any adjustments have been made.

8. The actuator will be screwed onto this steel window regulator access panel. This is what ours looked like when it came out: not bad, but since it’s out, go ahead and blast and repaint it.

9. Note the access panel is sealed to the door. It’s up to you whether or not to insulate the door panel itself. We opted to do so to reduce heat and as much noise from the side pipes as possible. You’ll want to replace the gasket when you reinstall the panel. Gaskets run about $20; a new set of screws, $5.50.

10. The kit comes with a template to locate the three holes that need to be drilled in the access panel (the top one on the template indexes with a hole already in the panel). Starting with a much smaller drill—we used a step drill—for the larger hole also lets you check your work as you go and “move” the hole by grinding out one side as you go if needed for everything to line up.

11. Once the holes are drilled, install the two included bolts into the smaller two holes, using them as mounting studs, and then fish the actuator’s two wires through the access panel and slip the rubber grommet into place to protect the wires.

12. These are the three main electrical connections to be made: a black ground wire, a green and tan wire that together go to each actuator (a pair for each side, only one is shown here), and the orange power wire that plugs into the fuse block.

13. The orange wire plugs into the fuse box in the BAT stud. Note that the harness includes an additional connector so a second accessory can also be plugged in even with the door locks installed.

14. Although there’s already a ground screw conveniently located on the birdcage just a few inches above this new one, screwing the door lock ground into a different location reduces the possibility of the system “searching for” a ground on one of the other wires rather than the birdcage.

15. The wiring harness is routed through the same rubber conduit that carries the electric window wiring. If you don’t have electric windows, not to worry: the holes are already there, just covered with a plastic plug that knocks out easily. This is the passenger-side door showing where the plug fit before we removed it.

16. The conduit definitely has a “door side” and a “birdcage side,” so check the assembly manual prior to installation. The rule of thumb is that the angled side goes toward the birdcage.

17. The rubber conduit in place between the door and the birdcage. Note how the conduit kinks once installed. You’ll want to make sure you’ve run the wires through it prior to squeezing the ends of the conduit into place in their holes.

18. The actuator is connected to the harness with a pair of slim bullet connectors and then sealed up with a clear rubber sleeve. While we’ve used a lot of Metripack connectors elsewhere in the car, the bullet connectors already installed in the kit are much easier to fish through the rubber conduit.

19. The actuator mounted in place on the access panel and connected with the door lock actuator rod. Adjust as per the instructions, connect to your alarm (or switch) and you’re done.