Newsletter
Sign Up today for our FREE Newsletter and get the latest articles and news delivered right to your inbox.
Home
Chevy High-Performance
How To
Additional Tech 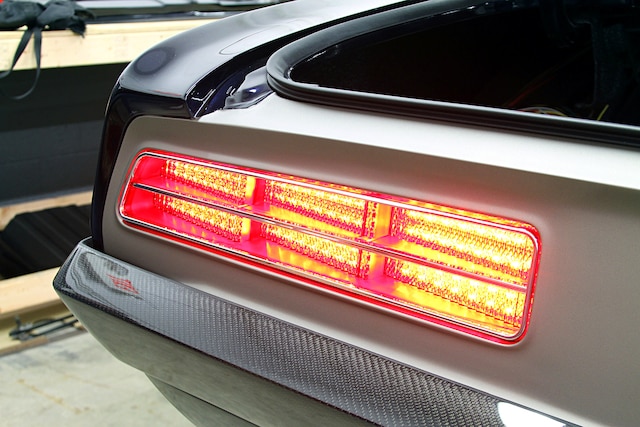 Back in the days when styling trumped just about every other consideration in the design of a vehicle, taillights were almost an afterthought.

Sure, other motorists needed to be warned when the car in front was locking up those four-wheel drums as the Beach Boys blared out of the single speaker wired to the AM radio, but not entirely at the expense of aesthetics. That would be tacky. Besides, taillights were, you know, a safety thing—like seatbelts—and safety equipment simply worried consumers.

After all, if a car needed safety belts and perhaps bigger, brighter taillights there must have been something inherently unsafe about the car, right? That was the thinking among many car execs and engineers a half-century ago. No kidding. Then again, they had liquor cabinets in their offices and chain-smoked in the car with their pregnant wives.

Fortunately, we’ve come a long way since then, but the evolution of safety in modern cars didn’t retroactively amend the shortcomings of the cars built generations ago. Well, mostly. Retrofit three-point belt systems have been around for more than 20 years, along with items such as those cheesy, universal center high-mount stoplamps, which look as out of place on a vintage car as wearing Crocs with your wedding tux. Actually, Crocs look out of place with everything, but that’s an entirely different topic.

LED replacement lighting in place of incandescent bulbs is becoming an increasingly popular, cost-effective way to add an extra measure of safety, as well as a dose of restomod sophistication. And judging from the monkey-simple installation we performed with Sled Alley on a 1969 Camaro, anyone with a 7/16-inch socket and opposable thumbs could make the upgrade in less than an hour—without the spouse having already pre-dialed “9-1-” on her phone.

The lights came from California-based United Pacific; and if the name is unfamiliar, you’ve probably been working more on muscle cars and late-model vehicles, because the company forged its rep in the street rod world with LEDs for those really old cars with taillights the size of Necco Wafers. The company was founded in 1984 by Major Lin, a hands-on enthusiast who started producing the parts he wanted for his own projects.

Lin is retired, but his sons Jack and Paul continue his work. Their latest products bring LED technology to popular cars of the muscle car era, like our aforementioned ’69 Camaro and others, such as 1967-’68 Camaros, Chevelles, Impalas, early C3 Corvettes, and 1960-’66 and 1967-’72 Chevy trucks.

Making our project all the easier is the fact that the LED system simply replaced the taillight lenses, which included all-new, built-in electronics, and plugged into the existing bulb sockets (our project car was also in the process of being entirely rewired with a Painless Performance Products wiring kit). A sequential lighting feature adds a bit of “check that out” panache to the upgrade. With it, the turn signals and the initial “hit” of the brake lights triggers a three-element sequence of the lights. Yes, the feature originated with some Ford products back in the ’60s, but a clever idea is a clever idea.

Each lens for the ’69 Camaro costs about $125 and there’s a replacement flasher unit for the fuse panel that’s also required. All told, it’s about a $275 investment from outlets such as Summit Racing Equipment, with spectacularly bright results. And at a glance, it all looks completely stock.

Believe us, if you can turn on a light switch without assistance you can do this project. In other words, the value and ease of installation makes it a truly bright idea. CHP

1. Our project car is Vince PiPia’s Pro Touring 1969 Camaro that’s under construction at Detroit-area Sled Alley. Featuring an LS-based powertrain and plenty of carbon-fiber trim, the LED taillights will further contemporize the car while adding a measure of safety.

2. The United Pacific taillights are sold individually—left-hand and right-hand—as is the LED flasher unit. The lenses run about $125 apiece, while the necessary flasher unit is about $15. We’d prefer to see all three components offered as an inclusive kit because it’s not entirely clear from the product info we’ve seen that the flasher is required.

3. This switch (arrow) on the back of each taillight turns on or turns off the sequential feature of the turn signals. The taillights are shipped with the switch in the On position, but if the owner decides he or she wants only the conventional “all on” turn signal, the switch is simply flipped down prior to installation.

4. This LED-compatible flasher is a must with the installation, as some vehicles’ electrical systems won’t work properly with the new lights’ electronics, such as no flashing or too-fast flashing. Wherever you’re purchasing the lenses, make sure to look for this complementing item, too.

5. The installation starts simply by loosening and removing the original taillight housings. For the ’69 Camaro, access is very easy, right below the edge of the trunk opening.

6. After pulling the weather seal and lens from the housing, the original-style tabs on the United Pacific lenses slip right into the housing’s retaining slots. Easy as it can be.

7. The weather seal around the lens is installed next. A little weatherstrip glue will hold it in place. The seals for this project car were still soft and pliable, negating the need for replacing them with new seals.

8. There’s only one harness connector for the LED lights, which pulls through the outboard brake/turn signal socket hole. The other sockets won’t be re-used.

9. The new housing/lens assembly slips into place like the stock unit. One thing: United Pacific offers only RS-style lenses for the ’69 Camaro, which means they don’t have the built-in backup lighting of the non-RS lamps.

10. On the backside, the housing simply cinches back into place with a 7/16-inch socket.

11. Next, the connector from the United Pacific kit plugs into the original 1157-style bulb socket for the brake/turn signal. That’s all there is to the installation, apart from repeating the process for the other taillight.

12. The new LED lights include a quick sequential function for the brake lights. With it, each of the taillight’s three elements light up sequentially when the brake is first applied and hold steady after that. This yellow wire that’s partnered with the plug-in harness allows the system to work conventionally, without the sequential function. To do that, however, the wire (including the complementing one from the other taillight) must be spliced into the car’s original brake light wiring. We preferred the sequential feature and simply tucked the unused wire back into the housing.

13. The harness and socket were plugged back into the housing, along with the other two original sockets. The other sockets aren’t used for lighting any longer, but reinstalling them filled the holes in the bottom of the housing and gave it an original, complete appearance. Plugs could be crafted for the housing holes to get rid of the unused sockets altogether.

14. No additional wiring is required for the LED’s function, but the lighting was integrated into a complete re-wiring of the car with a Painless Performance Products kit that includes everything for the 1969 Camaro.

15. Finally, the new flasher unit (arrow) was installed into the fuse panel. It plugs into the existing four-way/emergency flasher position and includes an additional ground wire that requires connection.

16. Here’s the illuminated taillight, with 84 LEDs replacing the original trio of incandescent bulbs. Their brightness is difficult to convey with a photo, but believe us, their visibility is stunning. Just as stunning was the quick and easy installation. It took us less than an hour for both sides.

18. A look at the sequential operation of the turn signals.

The harder you drive your Chevy the higher the reward, but the risks go up as well

Dave Wallace drives his insane 1969 Camaro hard, but going fast has risks and a crash at 140 mph roughed him, but he’ll be back, faster than ever!