Start Your C4 Corvette Sure and Strong 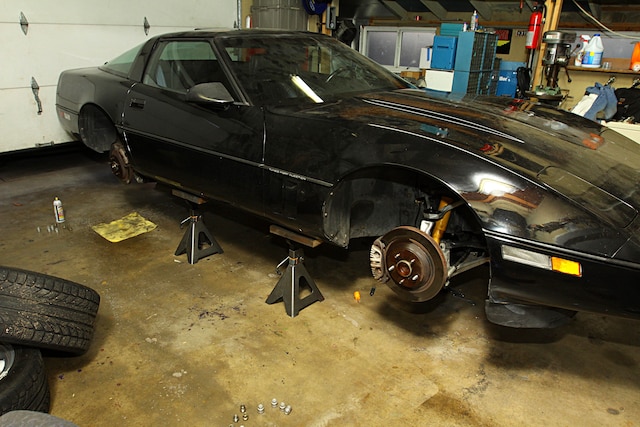 The first thing to let go on my 1990 Corvette Z51 after buying it used with 69,000-plus miles on the clock was the starter, but it didn’t happen all at once. That would have made it too easy to diagnose the fault. It was a sneaky, intermittent problem that at first seemed like ensuring the clutch pedal was fully depressed was all it took to start, but then the problem grew worse.

Having never owned a Corvette newer than a 1959 model I imagined the ’90’s problem was due to some modern-age DOT safety requirement like having a clutch pedal safety switch, so I located it and wired a bypass. This seemed to solve the problem for a few days. Then one early Sunday morning at the Balboa car show it reared its ugly head again. The beauty of a stick shift is they’re easy to start with a bum starter or a dead battery.

A friend and I pushed it to a fast roll then I hopped in and popped the clutch. A few blocks later the ’90 Z51 stalled so I had to crowd source a couple of obliging tourist lads from the crosswalk to help me push-start it away from a green light on Balboa Blvd. From there, I drove straight home and put the ’90 up on jack stands.

When my Delco-Remy starter motor worked it cranked briskly, as it should, so the starter solenoid was suspect. Similar to the disc in a conventional starter, the copper plunger contacts in the reduction starter’s solenoid tend to wear out prematurely.

I learned solenoid rebuild kits are not readily available anymore. In the search for Delco-Remy model number 10455702 replacement parts I ran across CVR High-Performance Racing Products (Arnprior, Ontario, Canada) and its Protorque Ultra starter. It was the impressive specifications of the CVR starter (PN 9323) versus sourcing a rebuilt Delco-Remy that inspired the upgrade. Vette

1. As a matter of safety, the first step was to disconnect the negative terminal (ground) at the battery.

2. Again it’s about safety. We devised a method on how to raise one side and plant it on jack stands then do the same to the other side, followed by shaking the car to test its stability.

3. The Delco-Remy starter was disconnected electrically and then unbolted and dropped down.

4. The Delco-Remy starter (left) puts out 1.4kW of power compared to the CVR Protorque Ultra’s 2.52kW, confirmed with an included test sheet.

5. The oil filter needs to be removed in order to remove the gravel shield (the flat tin sheet between the bellhousing and the oil pan).

6. Here’s where the last bolt needed to remove the gravel shield hides. Now is a great opportunity to change the motor oil.

7. Look for broken or chipped teeth on the flywheel. Next, clearances need to be adjusted.

8. Important! To adjust the starter-pinion-to-flywheel clearance the pinion was held in an engaged position with a tie-wrap.

9. Using masking tape helps to hold the bolts in place, freeing the hands to tighten the bolts.

10. Center a pinion tooth and check the clearance. The clearance should be 0.030-0.060 inch. Check clearances at least three locations 120-degrees apart.

11. The starter motor rotates (adjusts) on the mounting flange to allow clearance for exhaust and oil pan clearance.

13. This photo show the area marked with a Sharpie that needs to be cut out.

14. Clamping the gravel shield in a vice held it steady while we cut out area using an electric hacksaw.

15. The final shaping and cleanup work was done with a mill file.

16. With the CVR starter in the properly aligned position there wasn’t a need to lengthen the factory wiring.

18. The CVR Hitachi-type reduction starter (PN 9323) can be used to replace a conventional Delco-Remy starter on a VIN code 8 C4.

In the late ’80s Corvette product planners asked, “What else could we do with the ZR-1?” ASC designed a 1990 Spyder-version of the ZR-1 in response.

A photo-illustrated step-by-step tech article on how to replace 1984-1996 Corvette C4 outer window seals with ease.

» Read More
1990 CERV III Corvette: The “Finished” Corvette Indy, But Not the Next Vette

This 1990 CERV III Corvette was labeled as the "finished" Indy. See why this concept didn't make the cut as the next Vette.

It wasn’t until 1990 before true supercar performance returned to Corvette powertrain offerings. Read about the Hellcat connection with the C4 Corvette.

Is there a lower mileage, better kept 1990 Chevrolet Corvette ZR-1 in the world? Probably not. Zimmerman says the tires still have their original air.

More than 9,000 miles away in Sydney, Australia, Murray and Wendy Forman share a burning passion for the Corvette in their "Down Under Dream Garage" collection.

This month's The 'Glass Menagerie is highlighting some of our readers' rides like this 2013 Chevrolet Corvette C6! "Back home in Wisconsin, we saw this one at our local dealership and bought it. It had just 8 original miles on it at the time."