Tips for Storing a Classic Chevy for the Winter 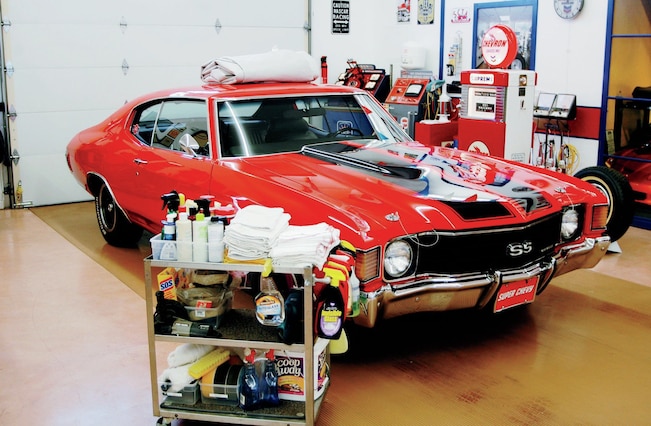 Tip of the Month

About this time of the year we get letters asking our advice on how to store a classic Chevy for the winter. If you follow a few simple steps, your ride will be fresh and ready to go next season. Start by changing those volatile fluids like oil, coolant, and trans fluid. Each can build contaminants that can corrode if left stored. Don’t forget to air up tires—over inflate by 5 psi or so.

The outside is just as important as the mechanicals. Wash the exterior thoroughly with clean, fresh water and a good car wash liquid. Then apply your preferred brand of a quality car wax. Most major brand wax products will do the job. Let the car dry out in a covered space for a few days. A good battery tender will go a long way in keeping your battery in top shape during the storage season. Also, with the problems that ethanol-laden fuel can cause, especially in carbureted cars, a good fuel additive should be added to the gas tank. A few miles on the car will get the additive to the carb and fuel lines for protection. A new product from Driven Racing Oil called Carb Defender (www.drivenracingoil.com) will protect that fuel system. Lastly, store your classic in a dry, enclosed space and keep it covered with a quality cover. Follow these tips and your ride will be ready to go next season when the cover comes off.

I am at that point where I need to ask the professionals, as I am unable to find enough concurring information to ID this engine by referring to the normal “by the numbers” publications and local sources.

The TFM suffix is the main issue if it is a 350-cid block. According to one publication, the “T” could be a designation for truck applications and another indicates “FM” as a low-compression 327.

I purchased the short-block assembly from an old friend/old-time drag racer/shop owner who was closing up his business. This block was in the corner of his shop for years and was originally removed from a ’70 Corvette, badged as an LT-1, to make way for a big-block. There was never a concern as to its originality to the Corvette, and was not represented to be the original engine, just that it did come out of the ’70 Vette. It has the high-comp LT-1-type domed pistons (PN 3959456), does not measure to have been overbored and has HD/hp “pink”-style rods. Do I have a 327 truck block that was stuffed with the good stuff or a cool piece of high-performance history? (What I do know is that the ’69-’70 model years continue to be confusing and somewhat contradictory to this rank amateur.) Your assistance is most appreciated. Thank you in advance and keep up the great work!!!!

Sometimes decoding a Chevy block can become confusing, especially when the casting date doesn’t indicate what decade. Let’s take a look at both the suffix codes on the front block pad and then the date code on the rear of the block: