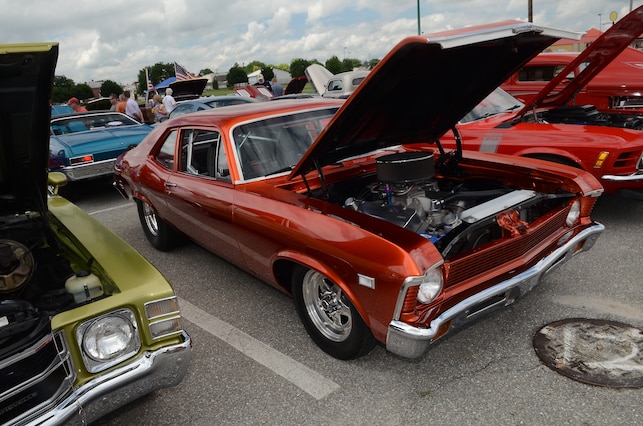 To Juice or Not to Juice?

I love your column, and it’s the first thing I go to when I get my Super Chevy magazine each month. This is my second letter to you, and I got awesome advice the first time—things worked out well. I’ve since started racing my ’71 Pro Street Nova SS show/street car at New England Dragway during the Nostalgia Day Races and test and tune nights, with a best run to date of 11.04 at 121 mph (the car weighs 3,652 pounds with driver).

I’m thinking about adding a 125-150hp cheater shot of nitrous, but I hear a lot of pros and cons about doing so. The downside I’m told is that it puts a heavy strain on a motor. I have a 454 GM cast block punched 0.030 over with a 10.5:1 compression ratio, forged JE pistons with full floating pins, Eagle rotating assembly, 4.25 stroke crank, GM oval-port cast heads (with mild port work done), Manley 2.19 intake 1.88 exhaust valves, Comp Cams roller cam with 0.652 lift, roller rockers, Edelbrock Victor intake manifold, Holley 950 carb, and Hooker Comp Headers with 2-inch primaries and 3.5-inch collectors. Behind it is a beefed-up T400 transmission, 3,500 stall converter, 9-inch with 3.89 Richmond gears, Strange axles, and a set of 31/18.5/15 Hoosier QTPs.

I would like your advice as to whether my setup will handle a 125-150 shot of N2O and what I could expect performance wise. Keep up the great advice.

Well, even though I lost track of your name and location, thanks to my ninja-like computer skills, I’d still like you to know how much I appreciate your kind words. Undue flattery will get you to the front of the line every time, folks, so just keep that in mind.

As a rule, adding horsepower adds strain to anything, pretty much no matter how you get there. The problem many times with adding nitrous is that people add too much of it to an engine that does not have hearty enough components to begin with. Clearly, forged internals are a good idea if you want some degree of longevity without melting a piston. A stock-type engine can generally handle a small shot without doing damage, say 50-75. You don’t mention if your crankshaft is forged or how good of a connecting rod you have, but it is my opinion that you can utilize a 125 shot without tearing things up. Back the timing down a bit, make sure you have a good quality race gas, and have at it.

Various horsepower calculators come up with a pretty big window of answers, so I’m using what I know my cars to make and what they run to put a number on your current combo. Given the weight and e.t. of your vehicle at present, I’d guess you to be making in the neighborhood of 520 hp. As for the expected performance with the addition of 125 ponies, we always used to work with the assumption of approximately 14 hp required for a tenth of a second in a low-3,000-pound Super Stock car. So with that rule of thumb in mind, I’d say you’re looking at an e.t. reduction of the better part of a second, hopefully producing a low-10- second timeslip.

I have a ’67 Chevy C10 longbed pickup, and I have a decision I need help with. The truck is a survivor, all-original from the hubcaps to the oil bath air cleaner. It does not have a tachometer, but in high gear (no overdrive), it is turning awfully fast at freeway speeds. It has 215/75R15 tires on 15x6 wheels. I want to get the tallest tire possible to give it some longer legs, but the guy at the tire store is no help. Friends say a 235/75R15 would probably fit. I don’t really want to buy wheels, so I guess that is really the limiting factor. What size tire would you recommend? Also, I have established that the rear is a 12-bolt GM, but how do I know if it’s a 3.73 or 4.11?

As for what rear gear is contained within your 12-bolt, that’s pretty easy to figure out. Jack up the back of the truck on level ground, install some jackstands in the interest of safety, and put the truck in neutral. Crawl under the truck and mark the driveshaft with a grease pencil or the like and start turning. One full rotation of the rear tire will take just under four revolutions of the driveshaft if you have 3.73s, or just barely over four revolutions if you have 4.11s.

In 1969, I purchased a brand-new Chevelle with a bench seat, four-speed transmission, and 396/325 powerplant. Even before the warranty expired, I had jerked out the stock cam and dropped in a 375-horse cam with solid lifters. I rejetted the Rochester Q-jet and changed the metering rods, and I also changed the springs and weights on the distributor, changing the timing. I can’t remember what jets or metering rods, or exactly where the timing went, but it seemed to work well. With the cam and lifters, this thing screamed, and far as I remember, I pretty much beat everyone I ran. I even think I got the jump on a ’72 454 back in those days. Possible?

I’ve always wondered what horsepower I could have been getting with what I did, and do some motors just run better than others? Nobody could beat me, and I’d like to think I was quick on the clutch and fast on the shift. I know I don’t provide many specifics, but I’m just wondering where I could have taken that 325hp motor. It was a hot 325-horse 396. Thanks for any comments you might have.

If you installed the 375 cam and solid lifters, you certainly helped it, but the compression, heads, intake, and carb remained unchanged, so I can’t see it being near as stout as an actual 375 motor. Jetting and timing can help a fair amount as well, but again, it still wouldn’t run with a 375. Urban legend has it that some motors are just freaks, but I’m more of a numbers guy. I don’t doubt that the same combination of components can produce varying results, but unless something was done wildly different in the assembly process in the good old Tonawanda factory, I can’t see one being too far off from another. I’d guess with your all your changes, 355-360.

I have looked through my supply of Super Chevy magazines and am trying to find if an article has been done on polyurethane versus rubber bushings. The ones in my ’67 Camaro require changing, and I’d just like to know which way to go. Any help would be appreciated.

Super Chevy has done stories and a video describing the pros and cons of both. If you go to superchevy.com and click on the video link superchevy.com/multimedia/chevy_videos/page3.html, you’ll see an in-depth install and test of Energy Suspension’s polyurethane bushings in a ’10 Camaro SS. The bushings took all the slop out of the steering and made the car much more of a precision instrument. I also came across a ’67 Camaro front end rebuild feature we did a couple of years ago, and you can check it out here: superchevy.com/technical/chassis/suspension_steering/sucp_1203_1967_camaro_front_suspension_rebuild/.

You don’t mention what your application is, but I’m going to guess it’s a street car, so either will probably suffice. With that said, if they in fact need to be changed out and you’re going to do so, I’d most definitely recommend upgrading from the stock rubber configuration, without a doubt. It’s a reasonably inexpensive upgrade with no downside.

I have a ’14 Camaro SS and love the car, except there is no traction. Instead, there is major wheelhop every morning getting on the freeway. With that weak independent rear, I’m afraid to get on it too much, but I don’t want to do a solid axle conversion because the handling is so sweet. What do you think is wrapping up back there? Bushings, weak springs, shocks? Does anybody make aftermarket items to solve this problem? I thought about the old low-tech idea of driving finishing nails into the control arm bushings, but there must be a better way.

I’d strongly implore you to resist the urge to drive finishing nails into anything within three zip codes of your ’14 Camaro! There is a better way for sure, and it’s a relatively straightforward set of upgrades required to address your issues. Go to the video in the link in the previous letter. Energy Suspension’s polyurethane bushings took a ton of slop out of the rear of a ’10 Camaro and should do the same for yours. My research would indicate that upgrading the rear cradle bushings and the rear trailing arms will probably be enough to solve your traction woes, but while you’re replacing the trailing arms, it would also be a good time to upgrade the toe rods. You can definitely go deeper if you’re so inclined, but I really don’t think your daily driver requires anything further. In my opinion, BMR makes a lot of great products for your specific application.