Newsletter
Sign Up today for our FREE Newsletter and get the latest articles and news delivered right to your inbox.
Home
GM High Tech Performance
How To
Additional Tech

An introduction to the most down and dirty project car we’ve ever built at GMHTP – probably. 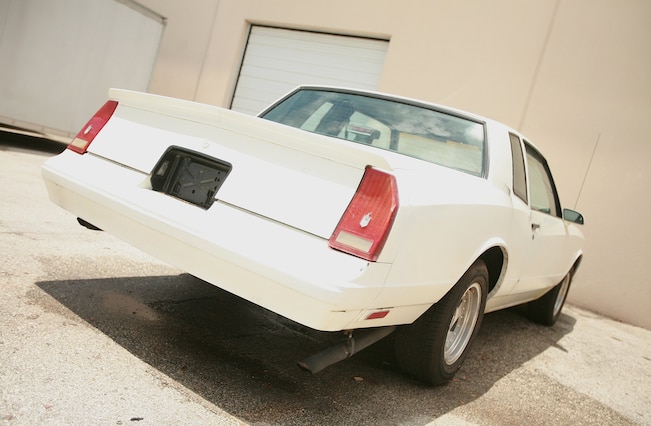 This is the very first time we’ve introduced a project vehicle, and documented it step-by-step along the way from the very beginning, via video. Project CheapG is a 1987 Chevy Monte Carlo SS that we scored super cheap from local tuning guru, Greg Lovell. Why another project car? Simple – many of our readers have been blowing up my inbox asking me where all of the low-buck, dirt cheap, gritty, grungy project cars were. Greg, being the sort of guy who likes to help others out, had told us about a few potential projects that we might be interested in. As it turns out, the Monte fit the bill nicely.

The idea is to get the 1987 Chevy Monte Carlo SS running, driving, and ultimately, instill it with LS power, upgraded suspension and brakes, and give it a cheap, but tasteful, makeover. This will be a 7-part segment following this introduction video, covering each step along the way. Once we reach all of our goals with the Monte SS, it will be retired – for a few minutes, anyway. Eventually, CheapG will be brought back out of the mothballs and completely rebuilt from the ground up. Until then, be sure to follow along with our dirtiest, rawest, most real world, and hopefully, appealing project car ever. Except maybe for Dirty Bird.

Systems Check: The first thing we’re going to do is go through the 1987 Chevy Monte Carlo SS fully; find out what works, what doesn’t, and what we’ll need to make this car road-worthy for the time being. Everything from the brakes, suspension, tire tread, to the much more mundane, like the headlights, brake lights, seat belts and so on. We want this car to be 100% safe, legal, and reliable – and that starts with basics like these.

Get it Running Properly: This should be a given. Obviously, we don’t plan on keeping the 305ci small-block Chevy for any measurable length of time, but we would at least like to drive the Monte for a few weeks before we rip out the boat anchor. For this segment, we’re going to throw on another carb, and give it a simple tune-up. Then we’re going to pop in a Def Leppard CD, roll up a pack of smokes in our shirt sleeve, and cruise the local A&W – staying faithful to the 1987 Chevy Monte Carlo SS's heritage.

Baseline Performance: Once we know full well that the car is now running, driving, and fully dependable, we’ll hit the track with the Monte in its stock format. We’ll take it around the road course, down the dragstrip, and even perform braking tests with it. We’ll be strapping it down to our in-house Dynojet as well. We aren’t expecting much out of our latest project vehicle's baseline, but at least we’ll have a solid starting point.

180 to 400: As in horsepower. This is the segment where we hit the local yards in search of a suitable donor engine for CheapG. As much as we enjoyed getting the old 305 up and running, it’s time to find its replacement. While it’s not 100% certain which LS-variant we’ll ultimately end up with, the idea is to find a cheap donor without having to spend a ton of money. A 5.3L LM7 out of a Silverado will more than likely be the weapon of choice. Once we get it back to the shop, we’ll start shopping for wallet-friendly speed parts and necessary hardware to get the motor to bolt into the G-body frame. We think 400 hp will be enough to take this car from a casual cruiser, to a relatively potent daily driver that can keep up with today’s pony cars.

The All-Rounder: G-bodies aren’t known for much more than casual cruising, and hitting the dragstrip. While we don’t plan on spending any more than one or two paychecks on this entire build, we still want it to at least bring the handling and braking performance of the ol’ G-body up to late-nineties standards. CheapG is going to be a car that even your stubborn wife, who hates your projects, would feel OK climbing behind the wheel to run errands in. And if we can get the handling and stopping power on par with a stock LS1 Trans Am, we think we’ll pass the test. So we’ll being doing el cheapo modifications to the brakes and suspension for this segment – even if we have to go dumpster diving.

Back to the Track: Exactly as it sounds, CheapG will hit the dyno, dragstrip, and the road course to see we’re we are at after all of our modifications. Will all of our hard work pay off? We hope so. In fact, we guarantee it. If we succeed in more than doubling the power output, while improving the driving characteristics of this now classic car, we will call it a win.

Cosmetics: We get it; when you’re working with a bucket like this, you can only polish it so much when you’re on a tight budget. But if we plan on putting this car in a magazine, and daily drive it along the way, it wouldn’t hurt to make it slightly more presentable. Besides, it’s been sitting outside our shop for only a few days, and in that time, just about everyone around the office had already “thrown stones” at it. As a result, we’ll be swapping on a set of new wheels and tires, fixing any obvious blemishes (inside and out), and maybe even throwing in a few surprises while we’re at it.