Upgrade the power of your Gen I small-block Chevy

An old Gen I 350 small-block and the right stack of parts makes for a solid, fun street engine 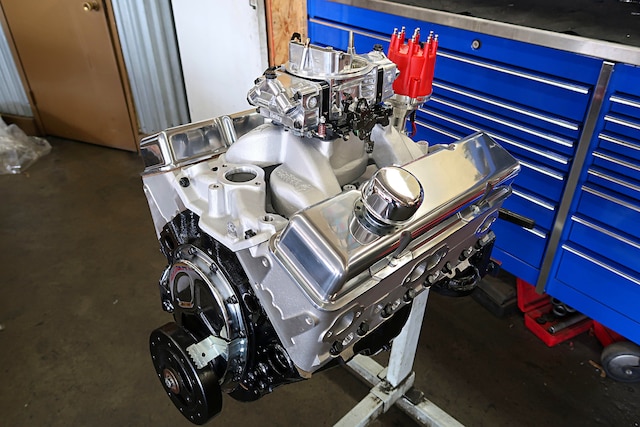 We love big-power engines that make stupid amounts of power. But that's not the real world for most people. Sure, it's cool to aspire to a 600+hp mill, but big power costs big bucks and they aren't always the easiest to live with on the street.

You also need to consider where you want your engine's power to be. With a drag car, having all your power up top is fine since the engine spends its time in the upper rpm range trying to win rounds. But for a street car that's all wrong. Yeah, running a high-rise single-plane intake will often give you a bigger peak hp number, but it often steals that performance from lower in the rpm range where, with a street car, you spend most of your time. The best option is to give up some of the top-end horsepower with a shift for more low- and mid-range torque. Yep, as the saying goes "hp sells cars, but torque wins races" is sort of true. In terms of a street car, torque is the grunt the gets you going from an endless series of stop signs and red lights. Torque that comes on strong, in the rpm range you often drive in, is what makes a street car fun.

So, for this exercise, we have one of the most common and most affordable engines on the planet: a 350-inch Gen I small-block Chevy. GM made a bazillion of them so they are easy to find and under the hoods of countless Chevys. Ours was an early two-piece rear main version, but what we did could be replicated with a later, one-piece rear main version. The key is to pick parts that will perform in the powerband you drive your car in.

The iconic Gen I 350-inch small-block Chevy. GM churned out millions of them and they are still good starting points for your hot rod today. Plus, they just look right stuffed under the hood of a classic Chevy.

This one is nothing special; an early two-piece rear main, two-bolt 350 with stock guts and a basic rebuild. The block was honed and fresh Clevite bearings were added to the mix along with a shiny new oil pump from Summit Racing.

Think of the camshaft as the engine's analog computer and its key to making good power. Of course, there's a fine line between power and street manners. Since this mill is dropping into a sweet street-cruiser Nova, we opted to not go nuts on the cam. The Comp stick (PN 12-212-2) spec'd out at 230/230-degrees duration (at 0.050-inch), a lift of 0.480-inch for both intake and exhaust, and a healthy LSA of 110 degrees.

Timing chains take a lot of abuse, and they aren't expensive, so there's no reason to skip on a replacement when doing a rebuild. This double-roller from Comp (PN 2100) should serve this engine well for many years. As always, we made sure to set it to TDC and align the dots on the two sprockets.

We've done hydraulic roller valvetrains on all of our engines for years, mostly due to how affordable the parts have become. But, so long as you are mindful to use the proper oil, there's nothing wrong with a good hydraulic flat tappet lifter like these High Energy pieces from Comp (PN 812-16).

Since an engine is nothing more than an air pump, heads can make or break an engine in terms of performance. Aluminum heads are great for knocking off weight and modern designs far outflow even good heads from "back in the day," but many people want to keep the nostalgic look. Well, enter Trick Flow Specialties' new DHC 175 cylinder heads. These heads (PN TFS-30210006) are made from A356 T61 aluminum, but have straight plugs and the exterior casing marks replicate the iconic double-hump heads. There are no exterior branding marks and the heads can be had without accessory bolt holes if you so desire.

But the heads only look vintage. Inside, there are 60cc CNC-profiled combustion chambers with blended bowls and small cross-section intake runners to promote low-rpm grunt. They also feature bronze alloy valveguides, ductile iron valve seats, and multi-angle valve seat machining. The decks and walls are cast with extra material so there's plenty to work with if you plan on any future porting. Ours came fully assembled with valves, springs, chromoly steel retainers, 7/16-inch studs, and guides, but bare versions are offered as well.

We have to admit that these new DHC heads look pretty cool, and with a coat of paint only a pro would notice the performance upgrade.

The heads were secured to our stock short-block with a set of ARP head bolts. Of course, if you were in full stealth mode you could use stock hardware, but we like the holding power of the ARP stuff. After all, we've been known to add boost or a shot of nitrous from time to time. We also used ARP's accessory bolt kit (PN 534-9801) since they look great and we were missing most of the original hardware.

For pushrods, we chose Comp Magnum pieces (PN 7644-16). Their 5/16-inch diameter was perfect for our Trick Flow guideplates and the 7.750-inch length was optimum for our valvetrain.

There are many directions you can go in terms of rockers, from stock stamped steel to really fancy (and expensive) pieces. We chose to reuse a set of stainless 1.6:1-ratio roller rockers we had left over from some crate engine tests. Rockers like these can be found online for just over $100.

To seal the deal with our intake, we picked up a pair gaskets from Mr. Gasket (PN 5821).

Speaking of intakes, this engine is destined for a cruiser so low- and mid-range power was our goal. With that in mind, we chose a Weiand Speed Warrior dual-plane aluminum intake (PN 8501). The isolated runners reduce intake charge temps and the high-rise/dual-plane arrangement makes great power and torque. It's a lot of intake for a couple hundred bucks.

Feeding the intake is a Holley 650-cfm Ultra Double Pumper carb (PN 0-76650BK). The all-aluminum construction along with billet metering blocks and baseplate makes for a lightweight carb with top-shelf options, such as four-corner idle circuits, dual accelerator pumps, and mechanical secondaries. It also has sight windows for no-mess fuel level adjustments and a factory preset electronic choke for easy starts. It showed up wet-tested and ready to run.

Spark came courtesy of an MSD Pro-Billet distributor (PN 8360). It's a ready-to-run deal, which means making it work comes down to three wires and a coil. The maintenance-free magnetic pickup keeps the timing right and it has a sealed ball bearing for long life. Ours came with both a vacuum and mechanical advance.

After adding a chrome timing cover and a pair of aluminum valve covers (PN SUM-G3302) from Summit Racing we were ready to stuff this mill into a Chevy.

And that Chevy is Tim Lee's 1963 Nova. Now, we dyno engines all the time here, but let's be honest, what really matters, especially in a small street-mill like this, is how much gets to the tires. Given this, we strapped the '63 to Westech's chassis dyno. Backing up this 350 is a TH350 three-speed along with a 10-bolt rear.

The Holley carb was spot on so we only had to mess around with the timing a bit before we got our best numbers. The Nova's best pull was 291 hp at 5,300 rpm and a very healthy 345 lb-ft of torque at just under 4,000 rpm. Remember, these are rear tire numbers, so the stock Chevy short-block with our aftermarket bits is churning out well over 360 hp and it didn't give up any street manners to do it. But it's the strong low- and mid-range torque numbers that will make this Chevy a blast to drive around town.

We recap day 4 (Thursday) of our Week To Wicked project on a 1955 completely aftermarket Chevy. Can we turn a pile of parts into a whole car in one week?

We recap day 3 (Wednesday) of our Week To Wicked project on a 1955 completely aftermarket Chevy. Can we turn a pile of parts into a whole car in one week?