Newsletter
Sign Up today for our FREE Newsletter and get the latest articles and news delivered right to your inbox.
Home
Chevy High-Performance
How To 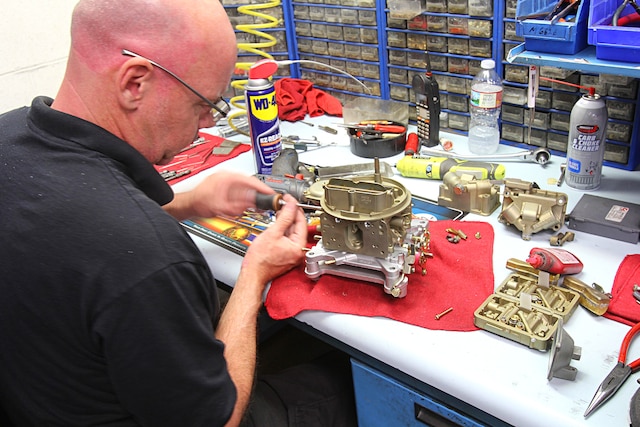 The most ubiquitous speed part on the planet has to be the Holley four-barrel carburetor. While millions have been produced, there are a few that are special. In our case, we've been harboring a factory-spec'd 780-cfm Holley carb for our 1966 SS 396 Chevelle for over 40 years—someday intending to bring it back to life. The job called for some serious intensive care. The carb was missing nearly all of its small parts, including the throttle shafts, vacuum secondary diaphragm housing, and the entire choke mechanism. Plus, the main body had been dropped and bent.

To resurrect this gem, we called our buddy Sean Murphy at Sean Murphy Induction (SMI) in Huntington Beach, California, and he willingly took on the job of resurrecting our beyond-dead carburetor. The numbers on the choke housing was what made this carb worth saving. The GM factory list number 3613 and accompanying 3883229 choke housing stamping called this out as a 4150, dual-inlet, 780-cfm Holley for a 375hp 396 Chevelle in 1966. The 4150 number refers to the overall configuration as a squarebore Holley with metering blocks on both ends. This carburetor is also commonly referred to as the 3310, which is the original aftermarket part number for this style 780-cfm carburetor. Later version 0-33310's were designated 750-cfm carburetors. Our Chevelle is the 360hp version that used a smaller, single-inlet, 600-cfm version (a 4160 version) so we planned to use this larger carb as a "Day Two" upgrade for our big-block resto project.

We were chagrined but he dove right in. The first issue was that the choke housing appears to have been dropped and bent the housing so the choke blade would not fit. Murphy worked on it with light hammer taps on a large punch and then with some mild polishing of the housing on the inside and some minor tweaks to the choke blade. It all fit again.

But rather than perform just a straight restoration, Murphy discovered a kindred spirit because we were more than willing to modify this OE piece to make our Rat run better.

Among the big mods were idle circuit changes. Murphy relocated the idle feed restrictor from underneath a plug in the top of the primary metering block to a replaceable jet that could be easily changed to fine-tune the idle circuit. He also modified the signal side of the primary idle transition slot circuit. This is located in the main body and is another way to improve the driveability of these carburetors at part throttle. The size of this restrictor would depend upon the application, but for our big-block he reduced the channel size from 0.120-inch to 0.093-inch. This reduces the signal to the idle feed on the channel side, essentially reducing the fuel demand through the transition slot.

There is also a non-adjustable factory idle feed system for the secondary side on almost all Holley four-barrels. This is added to ensure that the fuel in the secondary bowl is constantly refreshed. Instead of the original 0.040-inch restrictor, Murphy reduced this to 0.036-inch, which is still located under the cup plug in the top of the metering block.

He also modified the idle bleeds to improve idle quality. There are two air bleeds located on the top of each venturi on a typical Holley carburetor. The outboard position is the idle air bleed while the inboard one is for the high-speed circuit. This carb employed a large 0.076 idle bleed but Murphy exchanged the primary bleeds for smaller, 0.068-inch versions. A smaller bleed allows less air, which richens the circuit. Murphy does this to compensate for modern, reformulated gasoline that now includes 10 percent ethanol. The added ethanol tends to make the original calibration slightly leaner.

He also showed us a technique where he blows compressed air across the primary venturi that locates the signal to open the vacuum secondaries. He uses a small air nozzle blowing across a very small hole (or sometimes a small brass tube) in the middle of the passenger side primary venturi. This creates a siphon/vacuum effect that pulls against spring pressure in the vacuum pod and opens the secondary.

If we could put all of Murphy's knowledge down in printed form, it could easily fill a 140-page tech book with all his Holley carburetor secrets. But for now, we'll just celebrate one more muscle car Holley that has been resuscitated. CHP

We recap day 4 (Thursday) of our Week To Wicked project on a 1955 completely aftermarket Chevy. Can we turn a pile of parts into a whole car in one week?

We recap day 3 (Wednesday) of our Week To Wicked project on a 1955 completely aftermarket Chevy. Can we turn a pile of parts into a whole car in one week?