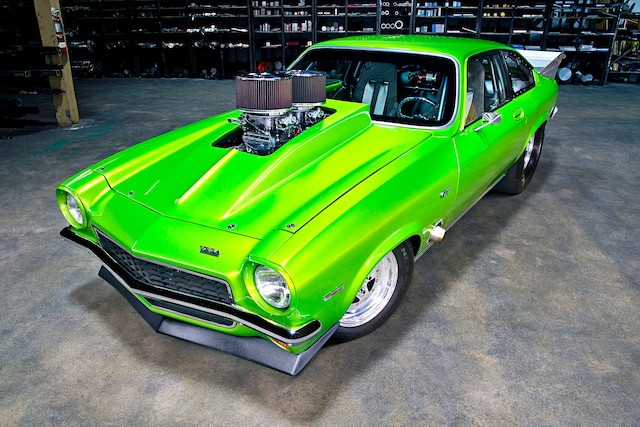 Inspiration comes in many forms. Chances are that most individuals who have been indoctrinated into the Bowtie fold have, at some point, been influenced by the different flavors of Camaros, Chevelles, and Tri-Fives. To some degree you can probably toss in Novas. However, the list isn’t fat with some of the other Chevy offerings. Thankfully, guys like Bob Nobile like to march to the beat of a different drummer. His object of desire wasn’t the usual Chevy staple—it was the lowly Vega that rocked his world as a youngster. He recalls, “there was a particular V-8 Vega that ran around the neighborhood that I really liked. I thought at the time that I would like to have one someday.” That day was many years away until he was ready to pull the trigger on the diminutive Chevy.

GM produced the Vega in all its variants at the Lordstown (Ohio) assembly plant from 1970-’77. There were over two million units manufactured during that time, however, finding one today in decent shape is a challenge. Faulty engines and persistent rust issues made the Vega disposable after only a few years on the road. Bob’s search for a decent one began after his business, Advanced Automotive Concepts (Baltimore) was launched in 2004. As expected, the quest to find one that wasn’t a rust bucket proved to be quite difficult. Chasing leads online and in local papers only yielded hacked up race cars that were too far gone for what he envisioned.

It wasn’t until a friend located one for sale locally that the search gained some traction. As Bob notes, “it was someone’s clapped-out small-tire race car that had been sitting in the driveway for a number of years. The guy’s wife was using it to store potted plants, potting soil, gardening supplies, and she had a whole bunch of bags of dirt stored on top of the hatch. This thing was nasty!” It was also technically not a Vega. What he went to look at was the Vega’s less glamorous rebadged twin—a ’76 Pontiac Astre, but for $400, it was priced to go. Since he was only looking for a shell, in his mind, there was enough there to work with.

When he parked the car in his shop and started digging into it, he explains, “it started out as a $400 car, and 300 of it went into the dumpster.” The car had heavy amounts of rust and had suffered some structural damage. After it was torn apart, he was left with the roof, the tops of the quarter-panels, the hatch well, the doorjambs, and about 12 inches of the window posts on each side. He eventually located another donor car that had front-end damage, but was virtually rust free from the firewall back. It was carved up and the parts used to stitch the missing pieces onto the existing shell.

Well before buying these cars, he notes, “I had been gathering up parts online and offline over the years. I decided to make the front clip as an early, thin-bumper Vega because I think it looks more attractive than the later ones.” Some of those pieces would go under the plasma cutter as part of the overall plan. The fenders were sectioned and stretched 3 inches and the quarters also sectioned and stretched 4 inches to accommodate the larger rubber at the back. The rocker boxes were removed and revised versions crafted from 1/8-inch strip steel with the outer boxes rolled from 0.040-sheet steel, while the entire firewall, cowl, airbox, and about 50 percent of the windshield posts were replaced with hand-fabricated pieces. With the additional 3 inches added to the fenders and the removal of the cowl, a fiberglass hood was ordered from Harwood Industries for modification. Bob had fiberglass wizard Frank Morawski at The Glass Shop in Bel Air, Maryland, stretch it 6 inches and also modify the front spoiler to a one-piece unit. The tailpanel was also fabricated from sheet stock and includes a custom tag box and Corvette C5 taillight hardware. And then there is the wing. It’s big with a presence of its own. It was fabricated at the shop from 5052 sheet aluminum featuring an adjustable wicker bill.

As the sheetmetal and fiberglass pieces were being massaged, Bob set out to create the frame, which started with some 4130 chromoly tubing. He is quick to point out that “this is an entire frame built by me at my shop. It is not a pieced-together back half/front half deal.” As the frame came together, hardware choices were made to support the mill that he was planning on dropping between the fenders. At the rear he had Ronnie Hash at Perry Hall Power Equipment in Middle River, Maryland, whip up a narrowed Ford 9-inch spool rear shod with 4.56:1 gears. Also included in the installation were a set of QA1 Proma Star adjustable shocks, Chassis Engineering sway bar, and a pair of Strange four-piston calipers and 11-inch rotors. Up front, the Vega would ride exclusively on Strange hardware, including spindles, adjustable Drag Race struts, four-piston calipers, and 11-inch rotors, while steering is actuated via a manual rack-and-pinion Pinto unit.

While the theme was small on the outside, under the hood Bob wanted to go with some big cubes, so he rang up JB’s Auto Machine in Baltimore for the machine and assembly work. The crew at JB’s started out with a GM block punched out to 565 cubic inches, which they packed with plenty of go-fast hardware. At the bottom end they installed an Eagle forged crank and a set of Eagle connecting rods mated to Mahle 11.0:1 forged pistons urged by a Lunati hydraulic roller bumpstick. On top they added a set of Dart Pro 345 aluminum heads topped off with an Edelbrock Victor Ram 2-R intake crowned with a pair of Holley Dominator 1,050-cfm carburetors. Spent gasses dump out via a set of in-house custom-fabbed 2 1/8-inch headers mated to Borla XR-1 Shorty collector mufflers. An ATI Superglide trans equipped with a 3,500-stall converter rounds out Bob’s drivetrain recipe.

Rolling stock was also a decision that was made early on as it impacted the needed dimensions of the body mods and frame fabrication. At all four corners, Bob chose to mount the Vega with Weld Racing Alumastar wheels: 15x4 up front and 15x15 at the rear. They are wrapped in Nexen SB802 165/80R15 tires at the front and Mickey Thompson ET Street skins measuring 33x18.50R15 at the back.

As the Vega shell and frame became one, it eventually needed to have the finish work done. Since Bob’s business is only set up to do fabrication, he regularly partners with other shops to tackle bodywork and paint. For this part of the build he hired Whirled of Color in Glen Burnie, Maryland, to do the finish work and lay down some color. This Vega was going to function as a rolling business card for his shop, so that color needed to have a strong presence with the car just standing still. That ultimate choice of visual bombardment came down to Mopar’s Viper Snakeskin Green Pearl.

As with the exterior, the interior would also depend heavily on the frame he crafted. Since there was virtually no carryover from the donor cars, much of the hardware installed was handcrafted at the shop to suit the existing space around the frame. Starting at the firewall, Bob added a handmade aluminum dashboard fitted with a full complement of AutoMeter Ultra-Lite gauges. Moving backward, with the huge rear M/T skins in place, seating was compromised down to a two-person affair, which was subsequently answered with the installation of a pair of Kirkey Pro-Street Drag seats and an ergonomically positioned Cheetah SCS shifter. The rest of the interior is finished off with the in-house fabbed tinwork that buttons everything up. When it came time to get things upholstered, two different shops were used for the stitchwork. Ben’s Auto Glass & Upholstery in Baltimore was responsible for covering the posts and the installation of a custom headliner, while Pat’s Upholstery in Essex, Maryland, took care of all the tweed work performed.

While Bob’s desire for a hopped-up Vega started during his teenage years, the culmination of that dream ended up taking 10 years of off-and-on build time as a result of running his business. When all the pieces were finally in place, it didn’t take long for the Vega to take its maiden voyage. Serving as a shakedown run on its first outing, Bob notes that his “first test drive was memorable. I did a 40-mile round trip with no tools or chase car and didn’t bust a single part! I was so happy that I did a half-hour happy dance.” On the horizon is an outing down the track. As business cards go, this Vega does the talking.