Bluevelle: Steve Wider didn’t really want a Chevelle, but ended up building a great one anyway 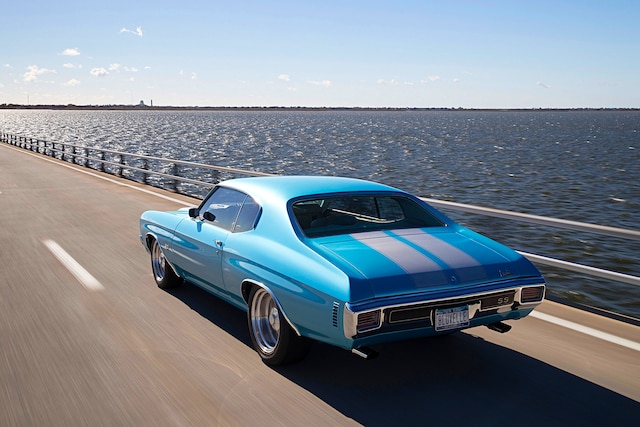 Like others from his generation who grew up without the Internet, satellite television, and the myriad other distractions that youngsters face today, a significant majority of Steve Wider’s attention was focused on cool cars when he was growing up. His fascination with all things mechanical and a fearless approach to fixing and modifying cars led to the establishment of his own business: High Grade Auto Body in East Meadow, New York.

Though High Grade is focused on late-model collision repair, not custom car builds, Wider and his team have turned out many top-shelf Pro Street and Pro Touring cars, and even a few stock restorations, over the years. Because of his experience and expertise, people often turn to Wider to help them find good cars. Back in 2006, he went with a friend to look at a ’70 Chevelle that was for sale. When his pal decided to pass, primarily because the car desperately needed new paint, Wider bought the car for himself. Aside from the fact that it was a real SS454 with decent bones, there was nothing particularly compelling about it, and ironically, Wider didn’t even really want a Chevelle. “I know it sounds strange,” he admits, “but I’d actually rather have any of the other GM A-body muscle cars instead of a Chevelle. If for no other reason, the Buicks, Pontiacs, and Oldsmobiles are all rarer than Chevelles.”

Wider’s initial plan was to straighten out the car’s body, spray it with a custom-mixed shade of blue, and make sure the mechanicals were safe and reliable. “Even though it was a real 454, four-speed car, and it was black-black, which is desirable to collectors, the engine and drivetrain had been changed, so I didn’t see a good reason to restore it to stock. I was just going to paint it a funky shade of blue and leave it at that.”

Though he had no intention of doing a full build, things got out of hand very quickly. Work got underway when Wider and a group of car buddies used razor blades to strip off what was left of the paint. He ordered new quarter-panels and complete new doors, and while waiting for those began to clean up the firewall. “Without thinking too much about what I was doing, I went kind of crazy smoothing the firewall and then decided it was so beautiful that everything else had to measure up to that.”

After finishing the engine compartment, Wider turned his attention to the rest of the body. The original quarters had been very poorly repaired with patch panels along the bottom so the master body man cut them off and welded in complete new quarters. Similarly, the original doors had hideous repairs along the bottom, including “two-pounds of mud” to hide the sins. “My business partner Justin Pianteri ordered all of the parts,” explains Wider, “and decided to get complete new door shells from Goodmark. The quality and fit was excellent right out of the box, and we did just a little bit of work welding on the edges to tighten up the gaps.”

Once the doors were fitted to the car, Wider sprayed their insides with a liberal dose of sound-deadening material in order to eliminate their tinny sound. He and his crew completed the rest of the bodywork and did the final preparations for paint. At this point, the most difficult and time-consuming parts of a complete refinish are over for most people, but not for Steve Wider. He was determined to formulate his own shade of blue that was distinct from any other blue he’d ever seen on a car.

“I thought about the color for a long time, over a year,” he explains, “and tried a lot of different things before finally mixing what I wanted. We call it Maliblu, and it’s made with materials from Planet Color, the custom paint line division of Sherwin-Williams.” The unusual blue hue was capped with Quick Silver SS-style stripes.

Aside from the on-off color, Wider wanted to maintain a largely stock appearance for the Chevelle’s exterior, but did do a few subtle things to improve it. For example, he welded the bumper bolt holes shut and welded studs to the backside of the bumpers to give them a cleaner look. For chrome plating, metal polishing, and all of the many small parts needed to complete the exterior, Pianteri turned to Don Ness at Don’s East Coast Restorations.

Turning his attention to the interior, Wider decided to keep the overall factory feel while upgrading the materials and functionality. The stock Chevelle seats were replaced with much more comfortable seats from a ’05 GTO. These seats, as well as the dash and custom-made door panels, were covered with Ultraleather by Bob at A & B Upholstery in Baldwin, New York. Ultraleather was also used for the headliner and the center console, which were sourced from a ’70 GTO. “The Richmond shifter is further back than a stock Chevelle shifter,” Wider explains, “so the original console didn’t work. With just some small changes, however, a ’70 GTO console fits perfectly.”

After covering it with Dynamat to insulate the interior for both sound and temperature, the floor got finished with the same high-quality carpet found in Mercedes-Benz vehicles. Dakota Digital gauges in a stock dash assembly, as well as a stock ’70 Chevelle sport wheel, give an interesting mix of old and new, and custom gray-tinted glass from Auto City Classic in Isanti, Minnesota, superbly ties together the exterior and interior colors. Steve at Street Smarts Sound & Security in Bellmore, New York, designed and installed a custom stereo system using a Kenwood head unit working through two amps and eight speakers.

In keeping with the car’s heritage, Wider bought a 454-cid engine from friend Jerry Yorek. It was built up by S-K Speed Racing Equipment using a ’73 block bored 0.030- over to yield 460 cid, 510 hp at 5,000 rpm, and 560 lb-ft of torque at 5,500 rpm. Polished Edelbrock Performer RPM aluminum heads, which were a Christmas gift from Wider’s wife, Lisa, work with TRW forged pistons to deliver a street friendly 10.0:1 compression ratio. Valve actuation comes courtesy of a Comp Cams hydraulic roller grind with 0.578-inch valve lift and 232-degrees duration at 0.050-inch lift for both intake and exhaust.

The air/fuel mixture is fed to the engine via an Edelbrock aluminum intake and Proform 850-cfm carburetor. Wider invested about 65 hours into grinding and polishing the intake and cast-aluminum valve covers, making both as smooth as a baby’s bottom. The engine’s exhaust is channeled rearward via Hedman headers and Jet-Hot ceramic coated 2.5-inch pipes to MagnaFlow mufflers. To augment the super-clean underhood ambiance, Wider used Billet Specialties wire looms to hide underhood wires. He also tapped Billet Specialties for their serpentine belt drive system, which spins a Billet Specialties alternator, Edelbrock water pump, and Vintage Air Gen IV SureFit air-conditioning compressor. A Be Cool aluminum radiator is tasked with keeping the big mill’s operating temperature within reason.

The engine’s twist goes through an 11-inch Ram Clutches disc and pressure plate setup to a Richmond 4+1 five-speed gearbox. A Hayes scattershield helps ensure safety while the engine’s motive force is turned sideways by a 12-bolt Posi rearend housing 3.55 gears.

Though built with an old-school feel, Wider wanted his Chevelle to handle and stop more like a modern performance car. To that end, he installed SSBC spindles, Hotchkis tubular control arms, Detroit Speed coilovers, and a 2-inch Hotchkis antisway bar up front. In the back, he also went with adjustable Detroit Speed coilovers and a Hotchkis antisway bar. The front and rear of the car are about 3 inches lower than stock.

Though he was happy to put in the time, effort, and money to finish everything in this Chevelle to the highest show standards, Wider doesn’t let that stop him from driving it all the time. He’s taken it to big shows all over the country, including events in Columbus, Ohio; Panama City, Florida; Myrtle Beach; Pocono; Charlotte; and the National Street Rod Association Northeast Street Rod Nationals in Vermont. He’s proud to have earned many prestigious awards, including being selected for the Designer’s Dozen at the 2010 Syracuse Nationals, but the one show that stands out above all the others is the Goodguys Great American Nationals at Pocono Raceway in 2008.

“The Goodguys show at Pocono was the first time the car was out, right after we finished it,” Wider recalls, “and we got the Bitchin Ride Award. I got extremely emotional there, not because the car got the award, but because I felt the presence of my brother in-law there. He was my best friend and a huge influence on me in the car hobby, and he passed away before the car was finished. But I know he was there with me, and that made the whole thing very special.”