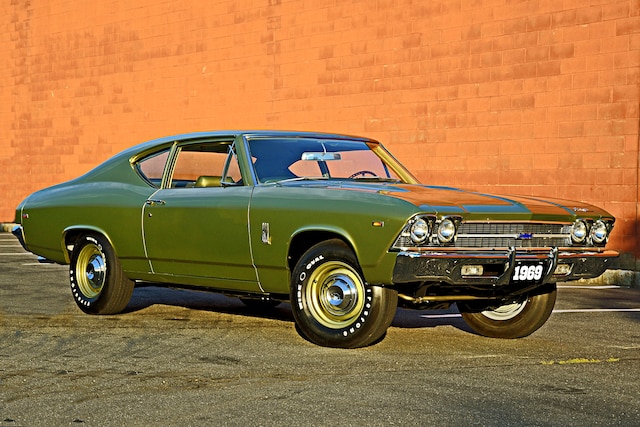 Albert Galdi of Somerset, New Jersey, has modified and restored a pretty extensive inventory of cars over the years, taking underpowered rides and turning them into high-horse street brawlers, each reformed with the addition of some extra punch under the hood. He became infatuated with the GM big-block rides of the muscle car's heyday and is a devout follower of Chevy's highest-performing models. Tops on his must-have list were the ones of the COPO and ZL1 variety, but finding one that he could afford became a great challenge. He did eventually score, restore, and still owns a real COPO Chevelle. However its value and scarcity make it difficult to drive and enjoy the way he wanted to do

Since Al was a master of crafting his own radical rides, he decided that the best way for him to experience the thrill of driving one of these top-of-the-line Chevys without worrying about damaging an original, big-money car was to build his own. Not only would it save him a hundred thousand or two, but he could also build it exactly the way he wanted and would not have to worry about possibly damaging a nearly priceless original car.

Al always liked the bare-bones style of a base-model GM A-Body, so he planned his dream car around the 300 Deluxe version of the Chevelle. Of course, the base engine in one of these low-line Chevelles would be way underpowered for a big-block-lovin' guy like Al, so he needed to come up with a new source of motivation.

Al had often wondered why the 427-inch aluminum ZL1 was never offered in the A-Body, as it could have done wonders in the intermediate bodystyle. So his plan for the ultimate sleeper was to put a ZL1 motor under the hood of a bone-stock-appearing 300 and do it the way the factory would have, had it offered this premier powerplant in an A-Body. Game on!

Al's good friend Dan Vasic found a usable 300 Deluxe for the taking: a 38,000-mile, slightly used example with solid sheetmetal. Al stripped the car at his garage and treated it to a nut-and-bolt restoration. He sourced as many N.O.S. parts as his bank account could handle, using repops only when he knew he couldn't source original pieces at a reasonable price.

The body on Al's Chevelle is made up of the donor car's rust-free tub, doors, and tail panel. The nose is a combination of N.O.S. fenders and an original Chevelle SS hood. Bumpers and bumper guards are original GM issue, as is all the trim, the grille, light bezels, and door handles. All were replated back to their original luster. Al also used all the original glass, except for the windshield, which had a large scratch in it. It was replaced with a fresh repop.

Albert chose to farm out the paint work. The shop took two full years—way longer than expected—to complete the job. The result was beautiful, though, and Al was happy. Happy, that is, until he got the car home. Unbeknownst to him, the rotisserie broke in the trailer, and in transit the body banged against the trailer sides, leaving bare-metal "stripes" in the fresh paint.

Since it had taken so long to get to this point, Al decided to repaint the car on his own, and built a paint booth in his garage. He took the car back down to bare metal and sprayed it in PPG 1012 Alien Green, a striking modern color that looks right at home on the vintage A-Body.

The low-buck nature of the 300 Deluxe meant the car's interior was equipped with parts that don't interchange with other Chevelle models. In some cases—the door panels and short sun visors—Al was able to refurbish and reuse the originals. Seat covers aren't reproduced for this model, though, so he had new ones custom stitched using N.O.S. cloth seat material and modern vinyl. The headliner was replaced with N.O.S. material used only on the 300. And since the 300s didn't use carpet, Al searched for original or N.O.S. rubber mats. When nothing was available, he installed stock carpet instead.

The car's dash was also repaired, replated, and finished with a full ensemble of correct original restored factory gauges by Auto Instruments. All the remaining interior trim is original to the car and was cleaned, polished, and reinstalled by Albert.

All the factory imperfections in the frame were filled, ground, and sanded, and new bushings and hardware were added throughout the chassis. F-41 boxed control arms and a rear sway bar were installed. Stainless fuel and brake lines were plumbed as well, and the rear received an Eaton Positraction differential stuffed with 3.55 gears, and sported new axles and brakes.

That's where this 300 jumps the OE ship. When it came to the car's powertrain, Al was content to build what GM never did, and like it would have been done in 1969. Luckily for him, GM had released the new ZL1 block back around 1995, and he happened to have one in stock in his parts room.

Starting with that standard-bore 427 GMPP block, Al built the bottom end with a N.O.S. 6223 steel crank, Manley H-beam rods, and GM L88 pistons that had been removed from a GM crate motor. He topped the cylinders with GM-issue 074 heads. To feed this beast, a GM 4346 carb graces a 198 intake. Al chose the 4346 carb as the ZL1 carb is just too much for a street car. The cam is a custom-ground mild solid-roller from Chris Straub, which sports a 0.561/0.553 lift.

Cooling the 427 is a correct BQ-code reconditioned Harrison radiator and an original 611 water pump. The master cylinder and brake booster are date-code and part-number correct for a big-block Chevelle. To make this powerplant look the part, it is topped with a true over-the-counter cowl-plenum air cleaner, a rare piece direct from General Motors.

Spent gases exit through a Gardener chambered-exhaust system. To get this monster through the gears, Albert selected an Autogear M22 transmission shifted via a Hurst stick. Body-color-painted 15x7 GM steel rims shod in Firestone repop G70 Wide Oval tires give this 300 the right look. This is a car that's simple but packed with performance under a plain green wrapper.

Al would like to thank Joe Hansen for all his help and support during the project. Another shout-out goes to Ed Pienta and the crew at Colours Inc. of Hamilton, New Jersey, for their guidance during the painting process.

Al cooked up one beautiful Chevelle that draws quite a crowd at every show he brings it to. His vision in metal is that one step GM could have taken to put the ultimate Chevy engine with GM's most popular body style.

The striking PPG Alien Green paint scheme really sets Albert Galdi's Chevelle 300 Deluxe apart. The hue is close to colors offered by GM in the 1970s, but the coat was mixed with an extra modern pop that makes it stand out.

You couldn't get a ZL1 in an A-Body from the factory, so Al built his own. He went to great lengths to make the installation look factory correct. N.O.S. parts were used whenever possible, and he detailed the engine bay with assembly-line touches.

A Gardner chambered-exhaust system vents the 427's spent gases. The 12-bolt is now filled with 3.55 gears, an Eaton posi unit, and new axles.

In keeping with the stripper nature of the 300 Deluxe model, Al went with painted steel wheels and dog-dish hubcaps, though these are just a big bigger than the 14s that would have come on the car in 1969.

Few of a 300 Deluxe's interior pieces are reproduced, so Al had to use his noggin to solve some problems. The seat covers were custom stitched from a mixture of modern and N.O.S. material, and he added the white stripe (instead of the original green) for a slight custom feel.

The door panels are survivors from the original donor 300 Deluxe. Al was able to reuse them after a thorough cleaning.

The dashboard came from the original car, too, reconditioned and filled with restored gauges from Auto Instruments.

Al learned his skills by building bikes, go carts, and hot rods and pushing them to the breaking point. From there he developed the skills to bring them back from the grave and put them back on the street, skills that would come in handy when it was time to build his dream sleeper.