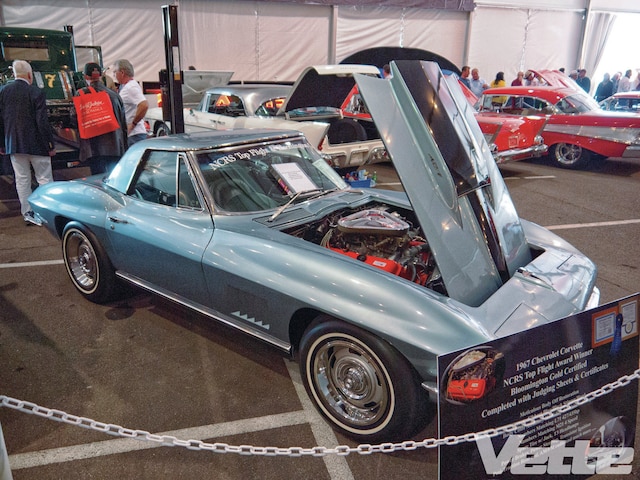 The normally arid desert city of Scottsdale, Arizona, was abloom with Corvettes--in particular, custom Corvettes--this January. Modified cars and one-off creations seem to have gotten more of the auction "green" this year in a segment of the hobby that is normally dominated by factory-stock-appearing vehicles. Barrett-Jackson instigated this lifestyle-driven auction event, held in Scottsdale every winter. Barrett is the biggest of the five auctions that take place during the third week of January, and the one known for earning otherworldly prices for Corvettes, customs, and muscle cars alike. Curiously, the factory-original cars often seem to underperform here, compared with their customized cousins.

Take, for instance, Lot 945.3, a '71 Corvette. Touted as "one of the nicest original documented 1971 Corvettes you will find," the car certainly seemed to have all the goods: Mille Miglia Red with Red interior, extensive paperwork (including the original buyer's order, buildsheet, and dealer shipper), as well as the Protect-O-Plate and original-owner information. The car was clean, well presented, and had a decent Friday block time. But when the final hammer fell, and all the buyer's premiums were paid, the car sold (no reserve) for $37,400, well below the NADA guide's $42,840 valuation for a four-speed, base-350 car. "Well bought at Barrett-Jackson" is a phrase not often heard, but it can happen if you know what you're looking at.

Another car that was "on the money" at Barrett was Lot 945.2, a '78 Silver Anniversary Edition. When new, these were the first Corvettes in a long while that held promise as future collectibles. The result was that many people paid double the original $12,164.89 sticker price. This particular example was a remarkable one, with low miles and the original Monroney still clinging to the passenger window. Unfortunately, the initial fervor over these "limited edition" cars led speculators to buy many of them at a premium and stick them in a garage, still in their dealer-delivery wrapping. The result is a perpetually saturated market of '78 Silver Anniversary and Indy Pace Car Editions. Perhaps predictably, the famous "Barrett-Jackson effect" was no factor here, and the sale price of $19,800 was $1,500 less than NADA or CPI Black Book.

Russo and Steele was also a good source of bargains over the weekend. One '68 427/390hp four-speed roadster was offered without reserve, its Tri-power induction and Porsche Red paintjob the only deviations from stock. Even with only 2,000 miles on a complete restoration, this show-worthy driver earned the seller just $37,400--"20-footer" money for a car in excellent overall condition.

Lot S766, a '67 427/400hp A/C car, was among the factory-correct Corvettes offering no excuses for a low sale price. This dazzling black coupe, complete with red "Stinger" hood, was promoted as having all numbers matching and a full restoration, "scrutinized to address every detail." Its sale price of $77,000 was an unqualified bargain for a concours-quality car, especially one factory equipped with A/C and side pipes.

Factory-original midyears also proved to be bargains back at Barrett-Jackson. A pair of Goodwood Green '67s, both from the Victor Gomez Collection, were offered in primetime without reserve. The first, Lot 1249.2, was a tan-interior 427/435 four-speed roadster boasting multiple awards, including the coveted Bloomington Gold Certified (2005), the Triple Crown (2005), and the Best American Performance Car Award at the 2006 Greenwich Concours d'Elegance. The final bid landed at $132,000, about half what Tri-power 427 roadsters have earned in the past. This car's sister was Lot 1250, a black-interior L89 coupe. Interestingly, the hardtop out-earned the convertible with a winning bid of $143,000.

While high-quality factory-stock cars weren't garnering that much attention or money, their customized counterparts fared much better. Perhaps people weren't looking for investments, but rather to spend some discretionary funds on something they could drive and enjoy.

But the biggest noise made about a customized Corvette was heard under the Barrett-Jackson big top. Lot 1010.1 was an Atomic Orange '62 convertible that earned a whopping $357,500. This sale flew in the face of all conventional auction wisdom. The '61 and '62 models tend to be looked down upon by both groups of Corvette people--those who like '63-and-newer Corvettes, and those who prefer the '60-and-older models. Additionally, the car's Atomic Orange paint looked more like "Stick-Around Brown" under the auction lights.

This was a well-constructed vehicle, and the high level of craftsmanship was evident. The equipment choices left us wondering, however. Why choose the LS3, when the most powerful production engine ever produced by GM, the supercharged LS9, is also available over the counter? The Pro Touring cars that earn the most money tend to marry iconic vintage design with the best state-of-the-art technology. This car showed neither and still earned a king's ransom. That's the "Barrett-Jackson effect" in action.

Not all customs were home runs. The crowds at both Russo and Barrett seemed to universally ignore recreations of vintage race cars with modern running gear. Lot F536, a '66 Grand Sport Replica, roared across the block Friday evening at Russo. It was a painstaking cosmetic recreation of Roger Penske's blue-and-yellow lightweight that ran at Sebring in 1966. This version also proved light on earning power, bringing just $66,000.

The bargains continued with a '70 Baldwin Motion Phase III Corvette. Baldwin Chevrolet was once famous for selling hot Bow Ties and shuttling them directly over to supercar tuner Joel Rosen of Motion Performance. The resulting cars were among the wildest of the tuner specials that pervaded the '60s and '70s. Genuine Baldwin-Motion cars with good paperwork, handwritten Motion Performance receipts, and Baldwin Chevrolet paperwork have traded for as much as $250,000 to $450,000 over the years. It was a shock, then, when this one sold for $37,500 with no reserve protection.

A closer look at the description was instructive: "It is a catalog built with…Motion super muscle car performance parts." In other words, the car was not ordered new, converted by Motion, and then delivered to its first owner. Rather, it had been enhanced by mail order later in its life. With no paperwork, the public viewed this car as nothing more than a nostalgia supercar clone. A similar Motion clone in Le Mans Blue only achieved a selling bid of $27,500 at Barrett.

Other flights of fancy likewise received a tepid response from the crowd. Lots F521 and S741 were both similar to the Grand Sport replica, but instead of recreating a particular historic race car, they used the historic-racing theme as a jumping off point in pursuit of their owners' unique creative visions.

The first car was faithful to period FIA rules, while the latter looked like a vintage racer but was equipped with selected modern updates. The problem with personal vision is that other people may not share it, and that seemed to be the case here. The '68 L88 "Gentleman's Racer" sold without reserve for a paltry $36,300. The dual-purpose race/street car didn't meet its reserve, and the high bid wasn't disclosed by the auction house.

There's a stark difference between a Corvette restomod with an L88 shoehorned into the engine bay and the Real McCoy. Only 80 out of the 28,566 Corvettes built in 1968 were equipped with the world-beating L88 427 engine. Lot S733 at Russo and Steele was presented as a fresh rotisserie restoration, with the all-important L88 option code documented by the factory window sticker. The car's pedigree was further bolstered by the original title, owner's manual, warranty book, Protect-O-Plate, countless ownership documents, and letters of authenticity for the trim tag and engine stamps. This ultra-rare and über-legit L88 was one of the biggest sales of the weekend, earning a thunderous $687,500.

On the other side of town at the Gooding auction, an unrestored, survivor-quality '69 L88 brought $451,000. A week later in Kissimmee, Florida, another '69 L88 roadster would hammer at $610,000. Regardless of popular trends, the rarest, most remarkable factory-stock examples will always remain top earners.

Judging by both volume and average sale price, customized Corvettes that offered both streetable performance and modern conveniences seemed to carry the week. The best values were found in higher-production- volume factory-original vehicles. Cars looking to recreate the rarities of the past seemed to be hit hard, while their genuine counterparts earned the biggest dollars of the event.

Overall, sales volume was up compared to years past. Corvette buyers were spending their discretionary funds on something fun, rather than risking whatever investment monies they had on an uptight OE trailer queen. No matter how you look at it, it was a good time to be a Corvette buyer during the 2012 Scottsdale auction season.