We rack up 3,000 miles in Callaway's long-term Grand Sport tester 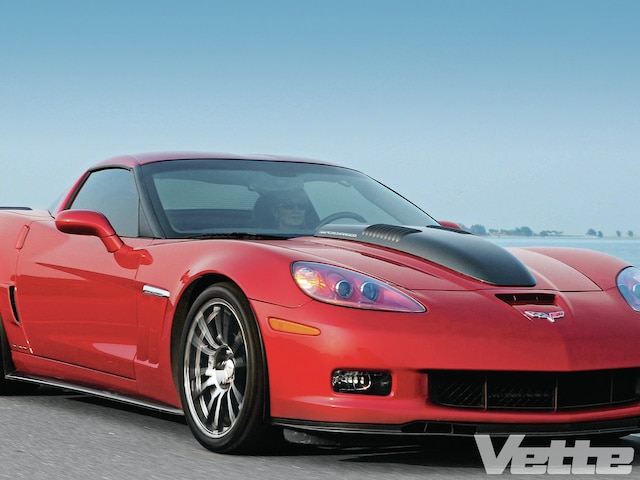 Fully 50 percent of the '10 Corvettes purchased were Grand Sports, and the number is likely to be comparable for the '11 model. Most of these new owners pamper their cars with frequent cleaning and do their best to keep the mileage low. That makes sense, since one of the first things a prospective used-Corvette buyer looks at is mileage. The more clicks on the odometer, the lower the value of the car.

Callaway Cars (www.callawaycars.com) decided to test this theory when it purchased a 3LT-equipped '10 Grand Sport on July 9, 2009. The company's specific purpose for buying the car was to perform long-term durability testing on its products. Callaway technicians began by adding the SC606 package ($21,395), which included an Eaton TVS2300 supercharger with a liquid-to-air intercooler, high-flow injectors, and upgrades to the fuel system. A Callaway "Honker" air intake and "Double D" stainless exhaust were also installed. The package was completed with a carbon-fiber hood bulge, embroidered Callaway floor and trunk mats, anodized doorsill panels, an SC606 dash plaque, an underhood plaque with specific VIN, and Callaway emblems for the fenders and rear fascia.

On September 22, 2009, Callaway handed the car over to Corvette Program Manager Chris Chessnoe. The plan was for Chessnoe to drive the GS to dealerships around the country (and beyond) in an effort to expand Callaway's distribution network. It must have worked, because the company now has 29 North American dealers--27 in the U.S. and two in Canada. Customers can order and take delivery of their new Callaway vehicles directly through this dealer network.

During 2010 a short-throw shifter ($490) and a Callaway/Eibach suspension system ($5,790) were added to the test car. Callaway also installed a prototype brake package for durability testing. By the end of 2010, the car had accumulated more than 60,000 miles with no reported problems.

In January, Team VETTE visited with Chessnoe at the NCRS Winter meet in Orlando, where he and Clearwater-based Callaway dealer Dimmitt Chevrolet were doing a sales promotion. We asked if we could borrow the GS, to evaluate how it was standing up to the strain of constant heavy use. He agreed, with one condition: "Rack up the miles." No problem! We arranged to pick up the car at the 2011 National Corvette Museum Birthday Bash.

When Chessnoe handed us the keys in Bowling Green, the car showed 77,500 miles on the clock. Clearly he had been busy since our Orlando meeting. The GS was now equipped with Callaway/OZ Black Chrome wheels with Michelin 19/20 Pilot Sport 2 Zero Pressure tires ($6,150). It also had a prototype carbon-fiber spoiler and rocker moldings, which might become available as a future option. The new additions were a nice touch to the looks of this already striking car.

Before we started our journey, we gave the Callaway a close inspection. It was hard to believe it had accumulated so many miles. The paint showed a few rock nicks on the front, but nothing major, and the rest of the finish looked new. The seats didn't show wear, nor did the steering wheel or cargo compartment.

During our first drive, we found that the car was tight except for some creaks in the removable roof panel. The six-speed manual transmission and short-throw shifter were rattle free and allowed for extremely quick, precise shifting. On a back road with no traffic, we hammered it through the gears. The 606hp engine pulled strongly to the redline, with no lag or flat spots. We drove a similar Callaway on the German Autobahn a few years ago, and it easily hit 200 mph. The handling was precise and capable in any type of corner. In short, the high mileage did not seem to have affected the car's performance in the least. We departed Bowling Green and headed to our first stop in Knoxville, Tennessee, where we had arranged to spend the night with a fellow Corvette enthusiast.

Retired GM Performance Division director John Heinricy hitched a ride with us to the Nashville airport, since it was on our route. Heinricy is an accomplished engineer and a multi-time SCCA National Championship winner, so we traded seats on one leg of the drive to get his opinion of the car. He really liked the prototype binders, calling them "Autobahn Brakes." Heinricy is certainly qualified to apply the moniker, since he has tested plenty of cars on the German high-speed road (not to mention the Nürburgring).

After we dropped Heinricy off, we had a chance to corroborate his brake assessment. The pedal provides instant response when pressure is applied, and stops are quick and smooth, with no drama or fade. This package has since become available as the Le Mans GT Brake System, and we'd consider it a must-have addition to any new Callaway Vette.

After Knoxville we headed to Chattanooga, to visit the owner of our former C5 project car, the Pewter Rocket. The old car still sounded strong and looked good sitting next to the Callaway.

Back on the highway the GS just loafed along in Sixth gear, with the tach hovering around 1,800 rpm. One push on the throttle, however, provided an instant reminder of the monster residing under the hood. After a few stops along the way, we arrived at our headquarters in Tampa, where Editor Heath got his turn behind the wheel. He was similarly impressed with how tight, quick, and pleasant to drive this high-mileage car was.

We then journeyed to Key West, and, 14 days and 3,000 miles later, we handed the key fob back to Chessnoe in Bowling Green. The car used no oil during its stay with us, and no cabin leaks could be discerned during a heavy rainstorm. We think the 606-horse GS still has a lot of good miles left in it.

Callaway's goal was to reach 100,000 miles at the 2011 Corvettes at Carlisle show, and it hit this target easily. As of this writing, the car shows more than 120,000 miles and is still going strong. In conclusion, don't worry about racking up the miles on your Callaway Corvette; it's designed to handle it. What else would you expect from a company that builds "Powerfully Engineered Automobiles"?