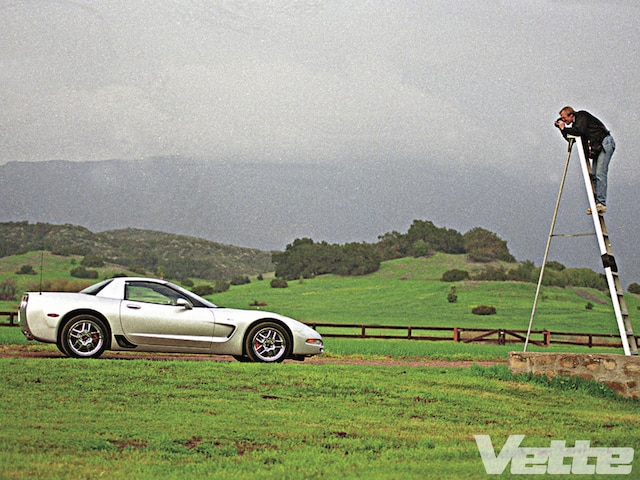 "The story of the Corvette-from concept to its continuity, from its balance of design and engineering to its role mirroring the culture into which each generation has appeared-is one of automotive history's most significant because it embodies the ideas and actions of very smart, passionate people."-author Randy Leffingwell on his upcoming book Corvette Sixty Years

On May 15, 2012, Motorbooks will release Randy Leffingwell's Corvette Sixty Years, a large-format illustrated book that chronicles the history of the Corvette from its earliest prototyping through its modern-day performance and beyond.

Leffingwell is no stranger to telling Corvette's story in words and photography. In 1997, he penned Corvette: America's Sports Car, followed by Corvette 50 Years (C50) in 2003, and Legendary Corvettes in 2009. "With each of these, I tried to find new information and a different way to tell what I really believe is one of the most interesting stories in automobile history," he says.

VETTE recently sat down with the author and asked him to recall the brainstorming sessions behind Corvette Sixty Years, and to provide us the behind-the-scenes story of how it was created. We then invited him to pick some of his favorite vintage photographs from the book to share with our readers, along with his comments.

"My publisher, Zack Miller, and editor, Darwin Holmstrom, and I started discussing doing a book on 60 years of Corvette history even before I started Legendary Corvettes in 2008," Leffingwell relates. "We knew a milestone anniversary was coming for the marque, and all we needed was an approach that differed from what we did with C50. Motorbooks' Publishing Board approved the idea in the fall of 2010, and I started work within a couple of months. I commenced interviews and photography just after New Year's 2011, and for the next 10 months it was my magnificent obsession.

"I wanted to present Corvette's well-known 60 years of accomplishment in a fresh and compelling manner," he continues. "That meant finding people with defining roles in its history and learning new nuances of their story, gathering new information that hasn't been read before, making no new mistakes in telling the history, and correcting some of the mistakes that are out there. It also meant going to extraordinary lengths so the readers exclaim, ‘Wow! I've never seen that car before.'"

Leffingwell began by reviewing what he considered the core books of the hobby—including Dave McLellan's Corvette from the Inside, Jerry Burton's Zora Arkus-Duntov: The Legend Behind Corvette, and Karl Ludvigsen's Corvette: America's Star-Spangled Sports Car, among others. He also reviewed Legendary Corvettes, to refresh his thoughts with what he had written, too.

"I wanted to map out Corvette's history from a variety of authors' points of view," Leffingwell explains. "Often one author fills a hole in another one's narrative. All this reading helps me build my list of interview subjects and the questions I put to them."

Leffingwell admits that he was prepared to "travel the country shooting 50 Corvettes," to populate Corvette Sixty Years with fresh and rare photography.

Meanwhile, in separate negotiations, his publisher worked diligently with General Motors to make the book an official GM publication. In February 2011, the deal was inked; the automaker, as part of the agreement, granted the author unrestricted access to the GM Media Archive's Corvette collection, which houses 30,000-plus images of America's Favorite Sports Car, the earliest of which date back to 1952.

"It totally changed the landscape of the book," Leffingwell says. "It went from mostly my photography to mostly GM archive photography, and in doing so, positioned the book 180 degrees from Corvette 50. All of us on the editorial team couldn't have been more pleased."

Packing up his shutterbug gear, Leffingwell returned to his office to examine everything on the Corvette that he could find in print, including the Corvette books in his personal library-"130 (at last count) in English, French, German, and a couple in Japanese," he says. His goal was to memorize the archive photography that has already appeared in Corvette books throughout the decades, so he didn't choose the same ones for Corvette Sixty Years.

Seven working days later, Leffingwell had amassed a shortlist of 1,500 Corvette photographs from the archives. His next challenge was to pare down the archival shots to the ones he could fit in the new book. "I knew Corvette Sixty Years was to contain 250 color photos and 150 in black and white. The problem was that I couldn't just fill the entire 256-page book with previously unpublished images of the very first year, or even just the solid-axle cars, so that initiated the editing challenge. Motorbooks wasn't going to let me add 500 pages and another 1,000 images to the specs for this book," he says.

Leffingwell recalls that approximately 300 of the book's 400 images came directly from the GM Archive. The others--such as a '69 L88 (the last L88 convertible), the one-of-one supercharged '53 Corvette, and the '55 Duntov mule--are modern photography of iconic Corvettes by himself and the book's co-photographer, David Newhardt.

"Corvette Sixty Years is a new historical appraisal of a well-known history," Leffingwell concludes. "Its collection of phenomenal images from the GM Media Archive, [along with] new photography, makes this the most exciting book-at least for me--that I've authored on the Corvette." Hopefully, VETTE readers will agree. Corvette Sixty Years will be available for pre-order on April 15, 2012, at www.motorbooks.com. It will be published in 10x12.25-inch hardback and retail for $50.