Jeff Monchilov's '80 C3/C6 is a different kind of hybrid 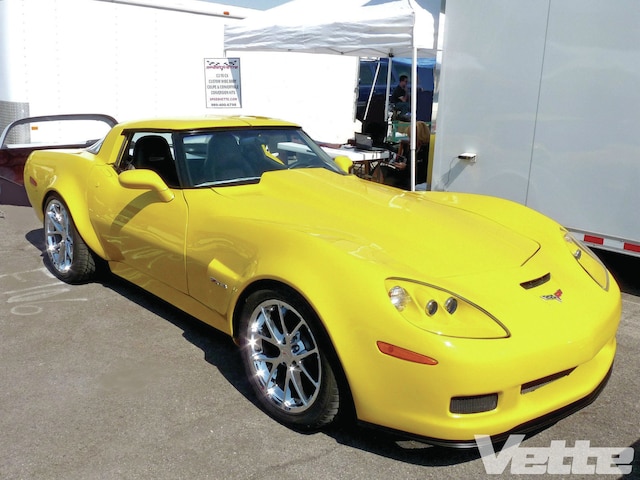 Jeff Monchilov used to spend the cold Michigan winters rebuilding Chevelles and Corvettes, driving each new creation after the spring thaw. When summer drew to a close, he would sell his latest resto and start on another project. This cycle went on for 25 years, until Monchilov found a worn-out '80 Corvette in the winter of 2009. The coupe had no engine and a very ratty interior, making it a perfect project car.

Monchilov had two C6 headlight buckets in his garage, and he soon began visualizing what they would look like on his old, beat-up C3. He made some sketches to see how the lights might appear once installed, and he found he liked the effect. Next, he searched for a C6 front bumper to help him fit the lights into the third-gen's front end. He located a torn Z06 bumper cover at a nearby wrecking yard, had a local fiberglass shop make a mold of it, and used the resulting copy on his project.

He immediately noticed that the new bumper was wider than the one on his '80, so he narrowed it to fit. He then added some modified L88 fender flares and a fender vent that looked like the ones used on the C6 Z06.

After the front clip was completed, he started modifying the Corvette's rear. Using the same process he employed up front, he fitted a C6-style rear bumper to the car. This job included blending a set of L88 fender flares into the rear clip. The original panels were stripped off of the car, and the new body was glued onto the Corvette's original steel birdcage structure. The stock doors, windows, and roof were blended into the overall design, with impressive results.

Next, the chassis was removed, cleaned, and powdercoated. New front upper and lower control arms, springs, and bushings were added, along with new trailing arms, springs, and bushings for the rear. Fresh brakes, shocks, and fuel lines brought the frame back to as-purchased condition. When the work was completed, the frame was reinstalled under the car.

Next up was the interior. This portion of the project included fabricating a new dashpad and instrument-panel cover. A standard C6 center-console cover was used to help blend the new IP into the late-model housing. Aftermarket instruments were then fitted to a flat plate and installed in the revised opening. Monchilov also fabricated new door pulls and a center armrest, installing them alongside a pair of C6 Z06 seats. Black carpet completed the interior modifications, leaving the finished cabin looking modern and tasteful.

Finally, Monchilov and his friend Bruce Kuznicki prepared the completed body for painting--but not before it was taken to the same local fiberglass company to make a mold of the finished product. C6 Velocity Yellow was added to make the unique creation stand out from the crowd, and stand out it does. The engine remains stock at this writing, but future plans call for upgrading the powerplant to match the modern looks of the body.

It took one-and-half years to complete this stunning C3/C6 Corvette hybrid, and the public reaction has thus far been very positive. A convertible version is nearing completion, and full body kits are being offered through Monchilov's newly formed company, SpeedVette. If you want to give your tired C3 a new look, give him a call at (989) 400-6798 for more information on creating your own high-style hybrid.

In this feature article VETTE takes a look at Tony Zappia's 1980 Chevrolet Corvette, which has been restored and is powered by a stroked ZZ4 small-block Chevy engine - Vette Magazine