Blowing the lid off a very special 475-horse ZR-1. 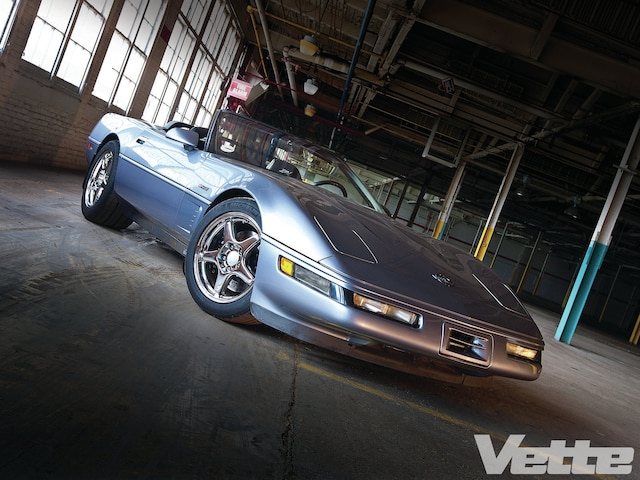 Does something about this '91 Corvette convertible seem familiar?

A closer look reveals that it isn't one of the 5,672 drop-top C4s built at Bowling Green that year. Additional scrutiny makes clear that it's not a standard '91 Corvette 'vert.

And, a review of the VETTE magazine archives shows that this car has graced our pages once before.

That was in our Aug. '94 issue, in the "Salute to Corvette Ladies" story. There, you might have seen this car--a ZR-1 Spyder, converted by Metalcrafters in Fountain Valley, California, wearing its original seats and wheels.

Over the next decade-and-a-half, it was sold to a second owner, who put it up for sale in 2010. That's where Michael Beal entered the picture.

A Corvette lover who'd had one of each generation of Vette (except the C4) up to that point, he was searching online Corvette ads. His wife, Kathy, had one condition for any Corvettes that would enter their garage. "My wife just won't have a coupe. It just will not happen," says Beal.

He'd fallen in love with the four-cam, 32-valve LT5 engine at the heart of the RPO ZR1 Special Performance Package, an option that nearly doubled the '91 Corvette coupe's $32,455 base price. As he recalls, "I was at a car show about two years ago, and I saw four or five Corvettes in a row with their hoods up, and I looked at this engine, and I said, 'What in the hell is that?'" Not only did he see that the LT5 was a visual work of art, but his subsequent research showed just how good a powerplant it was.

About a year later, he spotted this '91 in an eBay listing, which seemed to satisfy his desire for a ZR-1 and his wife's no-coupes mandate. "When I saw this, I said, 'Gee--I can resolve two issues,'" he recalls. "So, I bought the car after a very short negotiation."

It was after he brought it home to Middletown, Connecticut, that he learned he had something special. He took it to the Corvette Corral at Lime Rock Park, where the ZR-1 owners on hand flocked around it. While there, the ZR-1 Registry asked him to bring it to Corvettes at Carlisle 2010, where Editor Jay Heath spotted it and gave it his Celebrity Choice award.

Beal adds that the input from the ZR-1 owners at Lime Rock was most illuminating. "They told me that this car is unique, one-of-a-kind, and that nobody privately owns any ZR-1 convertibles that GM did," says Beal. "I was surprised."The surprises continued as he researched his C4's history, and found that the LT5 under the hood had been rebuilt and upgraded by Kim Baker. When he contacted the legendary Corvette racer and engine builder, Baker suggested that Beal bring it up to his Chester, Massachusetts, home. Once there, Baker amazed Beal with his knowledge of this car--despite not having any work files or other records to document the job. "Everything he said about it was from memory," says Beal. "He'd never seen the car in person--the engine was shipped to him from California, and then shipped back."

Beal had noticed that the port doors in the LT5's intake plenum--part of the "valet" power-access system--were gone. "Kim said, 'I did three versions of these [LT5] engines, and in the later version, I removed those ports. That's the best conversion I did.'" A conversion that, by Baker's estimation, bumped the LT5's output up by 100 horsepower, to 475.

That engine mod rivaled Metalcrafters' work to turn the ZR-1 coupe into a drop-top Spyder. "The ZR-1 Registry people told me that all those conversion parts had to be custom-made," Beal says. "There's nothing off-the-shelf there, because it's 3 inches wider in back than a regular C4. The decklid had to be custom-made to fit the car, and the amount of fabrication is unbelievable." He adds that it's estimated that the coupe-to-convertible conversion cost around $175,000 back then.

But that's not all Metalcrafters did. The company also fabricated a removable hard top, which the ZR-1 owners Beal met at Lime Rock Park said wasn't an off-the-shelf RPO CC2 item. "They said that it had to be a unique thing in and of itself, because the production one wouldn't fit on the wider car." He adds, "Metalcrafters was certainly capable of doing this work back in 1991."

When we contacted Beal for this story, he was enjoying a late-summer drive in his C4, continuing his enjoyment of America's Only True Sports Car. Not only did that passion spur him to buy this one, but it's also been the reason behind every Corvette purchase he's ever made. "I buy Corvettes because I like them," he says. "I don't really care about numbers-matching, or lineage. None of that stuff has interested me. It's always been, if a car strikes me, and I like it, I will buy it."

And if that results in a special Corvette--one seen in these pages before--all the better.

Robert DeMarco’s 1991 Chevy Corvette ZR-1 exemplifies the golden era of C4 performance tuning. “We wanted a high-horsepower package that was 50-state legal, and that forced us to retain the factory exhaust manifolds.”

In this feature article VETTE takes a look at Les Kernya's 1991 Chevrolet Corvette, which is a custom C4 coupe from Down Under with a righthand drive (RHD) cockpit layout - Vette Magazine

This Metallic Burnt Orange 1991 Chevy Corvette C4 Coupe is 17 years old but is on its way to full restoration. So far it has had some bolt-on performance mods done to the eninge. The rest is yet to come. Check it out at Vette Magazine.

Nobody can touch this 10-second, nitrous-fed, 1991 Corvette ZR1 monster