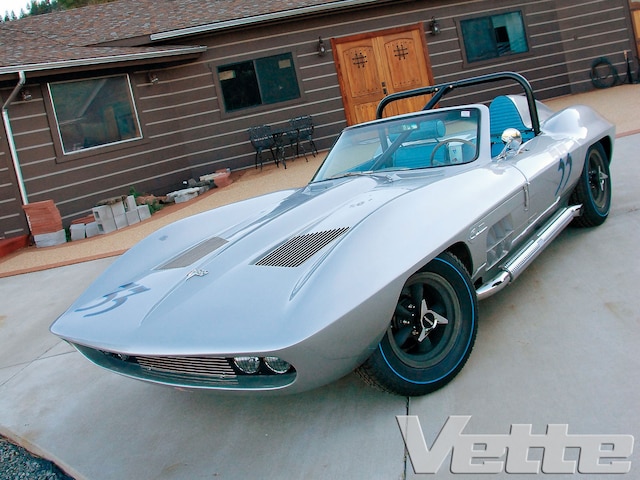 In ancient Rome, a Centurion referred to a "captain of 100," since such a man had authority over that number of foot soldiers in a legion. Centurions were loyal and courageous soldiers who had worked their way up the ranks. Once noticed by the general for their skill and courage in battle, they were made officers. Given this special status, signified by unique armor and helmet, they received a "Hail!" (meaning health, or safety) salute consisting of beating on one's breastplate, continuing with an upward thrust of the hand.

What's all this have to do with Vettes? Well, we recently came across a Centurion of a different sort, a rare design that fits on either the C1 or C2 chassis ('53 to '65). This 20th century warrior boasts its own special status and colorful history, both of which deserve recognition. While we won't try to imitate that traditional Roman hand motion (it reminds us too much of Mel Brooks' History of the World, Part I and those absurd "sword and sandal" scenes with Comicus and Empress Nympho), we will dignify the car by recounting its inspiration and origins, stemming from a famous Corvette.

Regular VETTE readers will likely recall Jeremy Clough's literate and conscientious coverage of Bill Mitchell's '59 Sting Ray racer in a recent issue ("Silver and Exact," Feb. '11). While a Roman Centurion was required to be literate as well, the details of the car of the same name are somewhat less civilized, though no less courageous.

The story begins with Warren "Bud" Goodwin, who founded the Fiberfab company in 1964, offering street-rod parts and body panels for Mustangs. He developed a number of kit cars using various chassis platforms and bearing exotic names such as Aztec, Banshee, and Jamaican. None was quite as alluring as the Centurion, however, which is not surprising since it was a close copy of the seminal Corvette concept. While this effort was certainly not the origin of the expression "imitation is the sincerest form of flattery," the maxim surely applies here.

Only seven bodies were built, but the limited run was not due to a lack of interest or promotion. Goodwin raced the Centurion shown here—the prototype and only factory-built version—in club events, and it appeared in "Man from Glad" commercials and as a backup car in the Elvis movie Clambake.

Sadly, both the company and its creator came to unfortunate ends, according to Tom Lieb, president of Scat Crankshafts, whose father was a dealer for Fiberfab. After the Liebs had picked up a load of body parts at the factory in Northern California and were heading back home, a startling news report aired on their truck's radio as they approached Los Angeles.

Lieb told us in a recent interview at his factory office that Goodwin apparently discovered his wife and factory engineer in flagrante delicto. Enraged, he grabbed a shotgun and added the suffix morto to his wife's salacious activities. He later claimed the gun went off accidentally, hitting her between the eyes. Apparently, the jury didn't buy his story.

GM's lawyers made the Centurion morto as well, not wanting to see an unauthorized replica on the market.

Goodwin's prized Centurion prototype is now owned by vintage racer and car collector Wes Abendroth (who confirms Lieb's recollections, by the way). He has a fondness for obscure and rare kit and race cars from the '50s and '60s, along with nearly two dozen Corvettes. One in particular, an '80 model that he bought new, bears mention, as it sheds some light on his attraction to the Centurion.

Abendroth stored the car for 30 years, putting only 4.7 miles on it all that time. Formerly a Corvette dealer in the Dallas, Texas, area, he had access to just about any model he wanted, and then some. But back then, the new-fangled computer technology on the impending '81 model bothered him, so he decided to purchase a car from the last year of carbureted Corvettes.

"My original thought was that it was the end of an era," he recalls. "The thought of a Corvette without a carb panicked me to buy a new 1980 model. The fear was that I wouldn't be able to work on it—no backyard tuning. You'd have to take it to the dealer."

Initially, Abendroth didn't intend to keep his carbed C3 for three decades in absolutely impeccable showroom condition. But after taking it home on a trailer and parking it in his garage, "It sat there for a while, then a little longer, and that became even longer."

During the ensuing decades, he didn't register the car, so it was never titled, never driven on the street, and still had the original MSO. He recently sold it, yellowed window sticker and all, at a Mecum auction.

Not all of Abendroth's vehicles are on static display, however. His Centurion is a regular sight on the vintage-racing circuit, and he restores all types of classic cars in his spare time—hence his aversion to circuit boards and laptops. (He doesn't use email, either, and lives near a remote mountaintop in the High Sierras of northern Nevada.) This fondness for the old-school approach explains his attraction to the Centurion, which he found through a fellow Corvette enthusiast in central California. The friend called Abendroth and convinced him to come check out this strange and mysterious car.

"When I first saw it, I thought it had come from Mars or something," he laughs. "But it looked really, really good, so I had to have it." Deciphering the Centurion's authenticity was a challenge, but the current owner of Fiberfab, Daniel Richer, told him to look under the back deck, behind the seats. Lying on his back, Abendroth was able to spot a piece of masking tape glassed into the body, bearing the number 12612. Based partly on that serial number, he has good evidence that it's Goodwin's factory-built prototype.

The car was in running condition but in need of a complete restoration. Abendroth decided to bring it up to race condition as a tribute to its background. What vintage racer worth his salt wouldn't yearn for a car that basically duplicates the original '59 Sting Ray Racer—and even goes it one better? After all, this one-of-a-kind car is outfitted with the much improved '65 C2 F-41 suspension and J-56 brakes, along with a '65 Chevy 327 mill, a Muncie M22 close-ratio trans, and a 3.70 rearend. The small-block has a forged 3.25-inch NASCAR crank, while a 750-cfm Holley sucks fuel from a 24-gallon ATL cell.

When Abendroth first came across the car, it wore American Racing magnesium rims, which looked cool but weren't all that good for racing. These days, he throws on a set of aluminum Torq-Thrust Ds at track time. He also discovered a bit of bumpsteer (well, actually a lot, as the car once spun out on a corkscrew turn), so he spent considerable time and moolah fine-tuning the chassis, shimming tie rods and adding Guldstrand sport suspension, among other mods. "You can spend as much money on that as cosmetics," Abendroth admits.

Even so, he had to repaint the car to the original silver, as it was a dingy brown when he first obtained it. Fortunately, the fiberglass quality was very good (something you can't say about all Fiberfabs from that era). Other mods included raising the nose slightly to increase the hood clearance, a tweak necessitated by the custom-fabricated aluminum air cleaner Abendroth installed.

In the cockpit, he placed Fiberfab lettering on the passenger side and fitted '65 Corvette blue-leather upholstery to racing seats he made out of aluminum. Behind the driver's bucket, he added a headrest pod, a factory option he came across in England. The shift lever is a Hurst unit, cut and drilled to match the style of the side mirror. The door handles got the same treatment, as did the mount for the vintage Tachrad radio (an AM/FM unit shaped like a tach and installed on the transmission tunnel).

To meet racing spec for vintage events, he also installed a cutoff switch between the seat backs, along with a rollbar, a fire extinguisher, a fuel cell, and twin overflow tanks (one each for oil and water).

This project isn't the only Fiberfab car in Abendroth's large garage. He came across a second Centurion, one whose bodywork had been installed to replace the original Sting Ray fiberglass, which burned off the chassis. So he's the only guy in the world with two C2-based Centurions. (He notes that the C1 version doesn't fit as well, as the driver sits too high, head above the windshield). Abendroth has big plans for this next one: "I plan to take it to a world-class level."

As Clough noted in his article, the '59 Sting Ray racer served its purpose in creating desire. And the Centurion capitalized on this yearning as well, if only for a brief moment in time. Thanks to Abendroth, though, there are now at least two Centurions worth saluting.