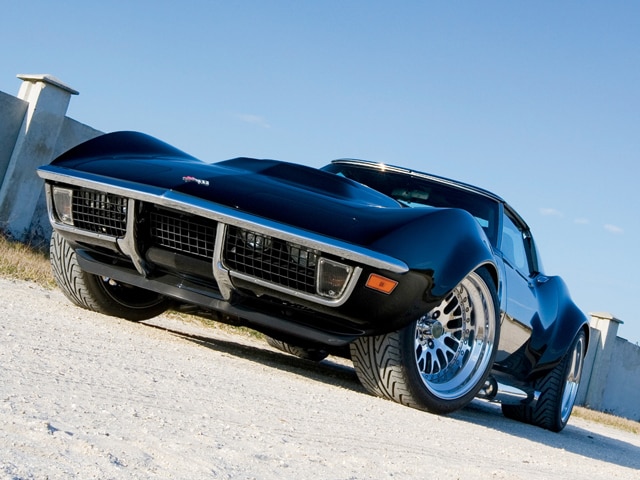 It's the age-old question that Corvette builders face each time they find a project car that's in less-than-original condition: Do you want to restore it, or build it into something else?

James Pulliam had some help when he answered that question, which came after he found this '72 Stingray.

To call it a "30-footer" would have been way too generous. "It was in rough shape when we got it," says Pulliam of the Vette you can see in the accompanying "before" photo. Even then, he knew what he wanted to do with it. "When we got the car, we had already decided that we were going to throw a late-model drivetrain in it," he says. "Originally, we were going to do a race car, with a rollcage and the whole nine yards. But the project got too expensive, and the car got too nice to put on the track full-time."

By "we," he means himself and his father, Jim Pulliam Sr., a long-time hot rodder in whose shop James received an education on the finer arts of building high-performance Chevys. "I used his shop, and he was out there every day with me," he says with pride. "He's an old-time hot rodder, so that's what he does."

Show-going with his Dad years ago led to one feature on this shark: a cleaned-up engine bay. As the younger Pulliam puts it, "Going to car shows when I was younger, I saw all the show cars' slicked-up firewalls, and I said, 'Why doesn't anyone do that to the Corvette?'" When the two got to work, they found out why in a hurry. "It's difficult to do, but we got it done," says James. "We got rid of all the vacuum [lines] in the car."

With the (seeming) miles of vacuum lines removed, and the engine bay-including the firewall-smoothed, it was ready for the supercharged LS-series engine. Based on an '03 LS1, it features a Magnuson supercharger, LS6 heads, a Comp Cams-ground Lingenfelter camshaft, as well as a Hooker exhaust system that uses 4-inch-diameter side pipes and MWM mufflers. (MWM = "Mufflers? What Mufflers?") Backing it is a Hurst-shifted Tremec T56 six-speed, with a stout Van Steel-built rearend center section holding a rebuilt Posi and 3.73 rear gears. Keeping it fueled are a Rock Valley stainless-steel fuel tank and a high-volume electric fuel pump feeding stainless lines.

Van Steel also provided the tubular A-arms up front, the adjustable composite monoleaf rear spring, and the QA1 shocks at all corners that went on the '72's frame, which was race-prepped (per GM's Powerbook) and painted silver.

Filling the fenderwells, outboard of a set of Wilwood four-wheel discs, are a set of Michelin-shod CCW wheels. "I was looking at Fikse wheels, and [the prices on] those are just outrageous," Pulliam says, so he looked at the more-budget-friendly CCWs. "I'd heard people mention them before, but I didn't understand what they were about. I gave them a call, and they helped me out with the wheels big time. When I got them on I was excited, because they look perfect on there."

Over the big rims and rubber is a C3 coupe body that had a set of ACI L88 fender flares molded in to fit the big rolling stock at each corner. An Eckler's L88 hood was also fitted and made to look OEM by Pulliam's buddy, James Johnstone. Those items are the highlights of the body's frame-off restoration by both Jameses (Johnstone and Pulliam), which also included shaving the door locks, wiper door, and nameplates, and converting the headlight doors from vacuum to electric operation.

Inside, a pair of leather-upholstered Corbeau A4 seats wear Corbeau five-point harnesses connected to a "shark bar." Aftermarket power windows and locks add convenience, and a Vintage Air HVAC system adds cool comfort to the cabin, which was lined with Lizard Skin insulation before final assembly. (The '72's underbody got the Lizard Skin treatment as well.)

The result is a street-driveable shark that's also track ready. "I take it to Palm Beach International Raceway for track days," says Pulliam, who adds that everything on his '72 is track-ready. "I could put a rollcage in it and take it out to the track, or just take it to the track right now without one and have a good time with it. But I'm always a little worried about wrecking it."

One notable road-couse adventure he had with the car came at the '09 ALMS race held at Sebring International Raceway. "We took it around the track during the parade laps, and people came up and said, 'Man, I can't tell your car apart from the C6.Rs!'" Pulliam says. "It really does sound like a race car when it's on the street."

Would he build another Corvette like this? "I would do it again the same way, because there's really no comparison between a modern drivetrain and the old small-blocks and big-blocks," he says. "It's like night and day."

Do you dream of making a track-ready/street-driveable car out of a "30-footer"-or worse? Pulliam has this advice: "Before you start the project, understand what it's going to cost. Be realistic about it. Get all the parts together, do as much research as you can, and then really understand what you're getting into. I had a pretty good idea, but I went way over my budget on what I thought it would cost."

With results like these, we'd say he got more than his money's worth.