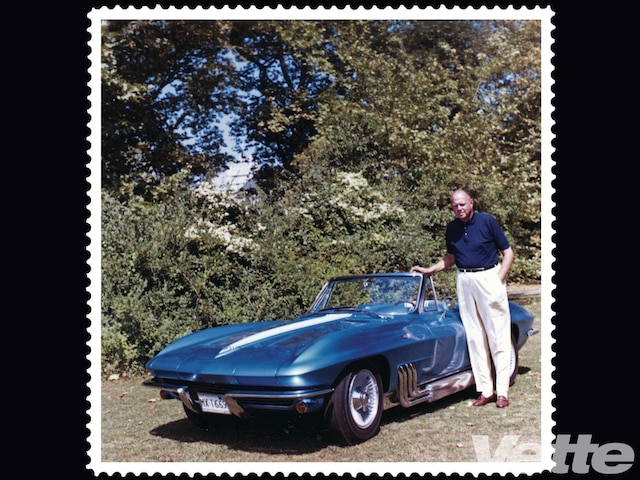 Harley Earl, the General Motors VP/Director of Styling and Design who unveiled the very first concept vehicle, and whose "dream" cars such as the GM LeSabre defined the Motoramas of the 1950s, occupies a very special place in the history of the Corvette.

Earl is considered by many historians to be the father of the Corvette, for it was his wild imagination that gestated the idea. The inspiration, or "muse," as Earl's grandson Richard explains it, was the time Earl spent with the LeSabre concept car, specifically when he chaperoned it and drove it as the pace car at an auto race in Watkins Glen, New York, in September 1951.

In a January 1954 interview with Detroit journalist Stanley H. Brams, Earl acknowledged his parental role in the Corvette's creation. "The Corvette was a little thing that I started," Earl said. "I ran that LeSabre up pacing a sports-car race at Watkins Glen, and that's where I got the idea."

Throughout the Corvette's introduction year, Earl was the car's biggest proponent within GM. It was he who staged the parade of 28 red, white, and black Corvettes that cruised down a Southern California freeway on May 1953. If he wanted somebody to have a Corvette-for TV, movies, publicity, or as a favor-he always got his way. One notable example was the second '53 Corvette off of the Flint, Michigan, assembly line. It went to Earl's younger brother, William "Bill" Earl, with a license plate that read "FLA," simply because that's the way Harley wanted it. (This particular Corvette was used by the Earl family in South Florida, where they vacationed in the 1950s.)

In the mid- and late-'50s Earl worked on space-age experimental cars that he dreamed would someday fill the highways and city streets across America. He designed and developed the Firebird I, Firebird II, and Firebird III gas-turbine "cars of the future," and devoted his final years at GM to the Cadillac Cyclone, a dream car that was light-years ahead of its time. In December 1958 Earl retired from GM, after years of what is considered by many to be the golden age of not only the automobile-design profession, but also the entire American auto industry.

In 1959, Earl moved to a new home at 995 South Ocean Boulevard in Palm Beach, Florida. "Harley and Sue Earl lived in a modest, three-bedroom, Bermuda-styled house on the beach," recalls Harley's daughter-in-law, Connie Earl. "He liked to take long beach walks and often went fishing for pompano, knowing that they are excellent eating. Most of the time, Harley kept to himself. I don't think anyone knew him well. His number one love in life, even over his family, was automobiles.

"Many people would slow up and do a drive-by of Harley's oceanfront house, to see the rare Corvettes designed by him, or sneak a peek to see if any other GM Motorama 'dream' cars were there, like the LeSabre or the Oldsmobile F88 II or F88 III," Connie continues. "Back then, during practically anytime in the 1960s, you couldn't miss seeing a sunburst-colored Corvette sitting on Harley's driveway, soaking up the Florida sun."

Harley Earl died in 1969, and the days of wild, custom Corvettes at the Earl household drew to a close. "I remember in the early '70s, when getting into Grandma Sue's yellow Firebird, she'd sometimes say how sad it was to no longer drive one-of-a-kind Corvettes. She'd remind us that once Harley passed away, GM stopped supplying free Corvettes to us," Connie says.

GM never had a need to photograph the one-of-a-kind Corvettes that populated the driveway of Harley's Palm Beach house, but the Earl family took pictures of these and the other notable cars that arrived there on a frequent basis. The vast majority of the surviving photos are from the years 1963-1967. According to Harley's grandson Richard, "We had many more photos, but they were destroyed accidentally in the 1970s."

So come with us now, as we tell a story that has been waiting more than 40 years to be told: the Corvettes in Harley Earl's driveway.

A Ride to Remember
By Richard Earl (with Christopher R.Phillip)

Harley and his wife, Sue, had the greatest American cars in their driveway during the 1960s-customized Corvettes specially minted at the GM Technical Center's ultra-futuristic "Styling Section" in Warren, Michigan. Most Americans only read about Harley in major newspapers or in the pages of a national magazine, but I got to be around him frequently. He was my grandfather.

Harley had a tradition of letting his grandchildren ride with him in his '63 Corvette convertible on their birthdays. My two older sisters, Suzie and Liz, and my brother, Courtney, had already been through their birthday rite-of-initiation. On December 27, 1967, it was my turn to be one of Harley's riders. I had just turned 8 years old, and my mom, Suzie, dropped me off at Harley's house for my gift. I bounded out of the car, ran inside the house, jumped on his lap, and remember him giving me a kiss and tickling me a little. All of Harley's grandkids growing up in the 1960s knew he was the stuff legends were made of. It was a special occasion to go for an exclusive one-on-one joy ride with him, and I didn't take it for granted.

I waited excitedly for him to find his keys. Pops-as we all called Harley-could see how eager I was, and so he teased me and told me that the housekeeper must have misplaced them. Then, I remember the magic sound of jangling metal upon metal in his pocket (he knew they were there all along) as he got up and started walking for the front door. I knew what was about to unfold-it was my turn to experience my very own birthday-ritual ride in Harley's custom '63 Corvette convertible.

While turning the key, Harley looked over at me from the driver side of the Corvette's two-seat cockpit and asked, "You ready to roll?" With that, the engine roared to life with the sound from those unique side pipes. He always launched his Corvettes hard coming out of the driveway onto South Ocean Boulevard, because an Australian Pine hedge near the property grew fast and always seemed to block the driveway's view of oncoming traffic.

The cars were moving fast on this day, but Harley just punched the accelerator as always, spraying driveway gravel every which way, and glided his shiny blue Corvette up to speed in a heartbeat. At that exact moment, I knew how much fun Harley was going to show me on my birthday.

There was no avoiding it, but people always eyeballed Harley when he drove his '63 Corvette. Perhaps it was the car, or maybe it was the image he presented, an extremely tall fellow cruising through town wearing his aviator sunglasses. When we went by the public beach area in the heart of Palm Beach, people did full head-turns on the high street curb and looked down at us in the beautiful Corvette, which was replete with a wide array of technological dials and dashboard gizmos they'd never seen before; this car even had an altimeter!

Afterwards, Harley and I cruised up North Ocean Boulevard on the way to the top end of the island, to the inlet dock. There's a nice quarter-mile stretch of palm-tree-laden roadway where you're so close to the turquoise-blue ocean you can practically touch it. That's when Harley downshifted the four-speed manual transmission, glued the accelerator to the floorboard, and gunned forward at maximum horsepower.

From as fast as the needle would go up on the speedometer, Harley then slowed the Corvette down as he shifted gears and braked while going into an S-turn. From there the road snaked inland off the ocean; we kept journeying northward to the inlet 2 miles ahead. On arriving at the inlet, I looked the one-off Corvette over with awe. Even at 8 years old, I could tell that there was something extremely special about the Corvette's curvaceous body, and that Harley's was the best of them all.

Before I knew it, we were back in the Corvette again, heading southward to my house where I'd be dropped off. Harley wished me happy birthday, and my idyllic Corvette ride with him was over.

I remember my enormous smile from 42 years ago. There's no doubt it's the same reaction legions of adoring Harley Earl fans have whenever they see one of his Corvettes today.

Special thanks to the Earl family, especially Connie and Richard Earl, for their invaluable assistance in assembling this story. Learn more about Harley Earl at the Official Harley Earl website, www.carofthecentury.com.