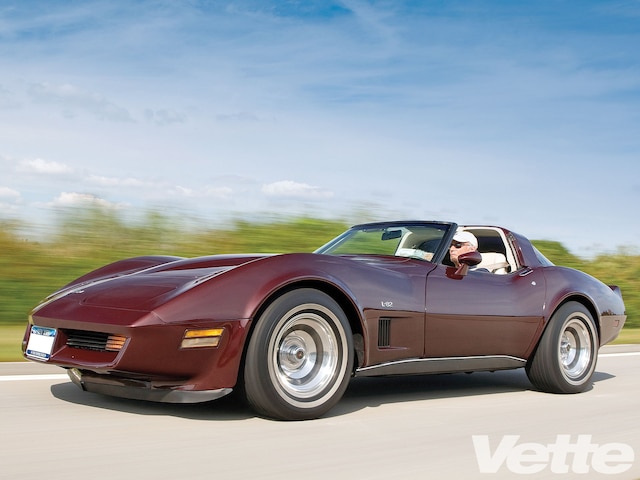 By the time the '70s rolled into the '80s, the Corvette was in need of some serious changes to keep America's Only True Sports Car from turning into an underpowered parody of itself (like its Blue Oval two-seat competition had become), thanks to ever-tightening Federal safety and emission-control standards.

Big changes were in the works for what became the fourth-generation Corvette, but there was still plenty to do with the existing C3.

For 1980, the body was put on a diet, with lighter-density roof panels plus thinner hood and outer-door panels going on. The chassis also got new weight-saving components-an aluminum rear crossmember and differential housing to replace the previous cast-iron ones. In all, the lighter-weight components meant a 250-pound weight reduction over the '79.

Speaking of the body, the front and rear of it got the most-noticeable changes. Gone were the separate spoilers and front/rear fascia, which dated to 1978 and 1975, respectively. On went new, one-piece integrated bumper caps, which helped cut the Vette's coefficient of drag from 0.503 to 0.443 (over the RPO D80 spoilers-equipped '79).

The new front and rear styling also won plenty of admirers, including Tony Zappia. Though he had loved the way the '80 Vette looked for a long time, he didn't come across this one until early 1997. "I found it in February of that year, and I didn't purchase it then because the gentleman wanted too much money for it for the condition it was in," he says from his Smithtown, New York, home.

About seven months later, Zappia saw it again-consigned for sale on a used-car lot. He found out that the owner was going through a divorce and had some other problems, so he figured that the '80 could be had at a better price than before. The offer was made and accepted, and Zappia was this C3's new owner.

He started with the body, which still wore its original Claret Red color, but had been repainted in basecoat/clearcoat paint instead of the original acrylic lacquer. The years, and outside storage under a tarp, had taken their toll on the finish. "I had it wet-sanded, and some little body stuff done to it," he says of the work needed to make the paint look like glass.

Next to get Zappia's attention: the non-original small-block under the hood, which Tony kept in for the first couple of years that he owned the '80. "It just didn't have enough horsepower," he says. "I made a decision, because it wasn't the original engine: I said, 'OK-what do I do? Do I put the original L82 back in the car, or do I give it a little horsepower?' Instead of messing with the factory mill (which he's kept all along), Zappia decided to go the crate-engine route with a GM Performance Parts ZZ4.

There was just one problem with the ZZ4, though. "When I got it, I discovered that it had a bad crank," says Zappia, who decided to do more than just replace the flawed crankshaft. "I ripped it apart, and I had my engine builder make a stroker out of it," he says. "I built a 383-it has SRP pistons in it, an Eagle crank and rods, a high-output pump, and Crane 1.6 roller rockers." Zappia kept the ZZ4's aluminum heads, but he had them ported, polished, and given a three-angle valve job, so they flowed better than before.

In all, Zappia figures that his stroker 383 puts out much more power than the original L82's 230 peak horsepower. (Don't laugh-1980's standard L48 350 was only rated at 190 hp, and the California-only LG4 305-inch small-block carried a 180-horse rating.) How much more? It hasn't been dyno'd, but Zappia's run his 383's equipment combination through some computer software that estimated horsepower and torque numbers. "The way she's set up, we're estimating that it's putting out about 430 horsepower and 440 foot-pounds of torque," he says.

The rest of the powertrain and chassis got their share of attention, too, starting with the Turbo-350 that was in the car. "I have a friend who has a transmission shop, and he put in a shift kit and bulletproofed it, so it's good for over 500 horsepower," says Zappia, who also restored the '80's brakes and RPO FE7 Gymkhana Suspension.

Inside, only a new pair of seat covers from Al Knoch was needed to freshen the '80's cabin. "The rest of the interior was beautiful-the dash panel, doors, carpets; all that was impeccable," Zappia says of the interior's condition when he bought the C3. "There was a crack in one of the seats, and you just can't change one seat cover, so I did both. Al Knoch sent me the stuff, and they're like the originals-leather on the middle, and vinyl on the outside."

Now that Zappia's got his '80 looking and running its best, what's it like to drive? "It's a very fun car to drive," he says. "When I leave it in Drive and nail it, when I hit Second gear it goes sideways a little bit."

Zappia is one of the ROSCOs (Royal Order of Smithtown Corvette Owners), who get together once a week, and who were featured in an NBC News story about the Corvette's 50th Anniversary back in 2003.

Nineteen eighty saw 40,614 Corvettes roll out of St. Louis Assembly, a drop from the record 53,807 built the year before. Likely the second "oil shock" of the '70s in the summer of 1979, which sent pump prices over a dollar a gallon for the first time, scared off many would-be Vette buyers then.

Even so, with the big production numbers of the third-generation Corvette-with 10 years of its 15-year production run seeing more than 30,000 built-there are plenty out there for building your way, or showing and cruising if it already is. What's Zappia's advice if you're looking for one? "You've got to look out for rust," he says. "You've got to have a good frame. People think that because it's a fiberglass-bodied car, that it doesn't rust, but it does underneath the body." He adds, "With the C3, you either love it or you hate it, because of its 'Coke-bottle' shape. I think they look neat. It's a very affordable car to get into, but it depends on what you want [to do with it]. I wanted horsepower, and that's why I put that in."

Jeff Monchilov's 1980 Chevy Corvette C3/C6 is a different kind of hybrid. Click here for more details on this great car or check out the April issue of Vette Magazine