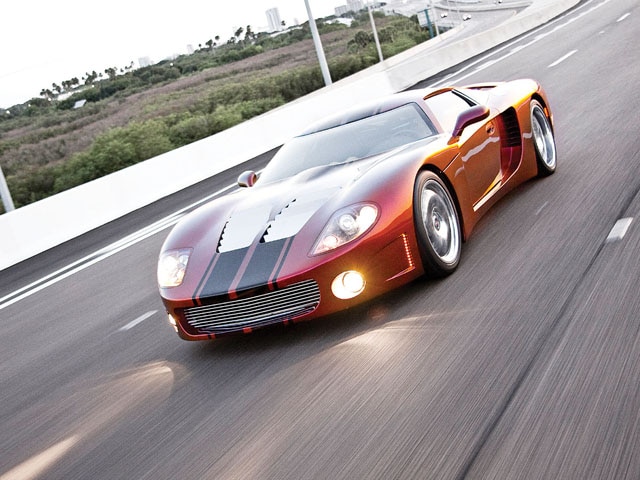 Ever since Zora Arkus-Duntov first dreamed of making the Corvette a mid-engine supercar, Vette hobbyists have anticipated the day the car would graduate from the front-engine paradigm that has dominated the domestic performance scene. Though Chevrolet has experimented with mid-motored concept and engineering Corvettes over the years (specifically, the '68 Astro II, the '70 XP-822, the early-'70s XP-895, the '86 Indy Concept, and the '90 CERV III), none has reached production.

That elision has allowed Factory Five Racing in Wareham, Massachusetts, to offer the public what Chevrolet has not: a lightweight, tube-steel-chassis, Corvette-powered, mid-engine monster that's quicker to 60 mph than a Ferrari Enzo, a Saleen Twin-Turbo S7, a Ford GT, or a Lamborghini Murcielago.

"The idea for the GTM began with the C5," says Factory Five president David Smith. "If you look at Chevrolet's C5-R race car, you can see the Corvette's welcome transformation into world-class status. We developed the idea of taking the well-engineered parts from the C5 and dropping them into a tube-frame chassis with a superlight composite body. Imagine a Corvette 1,000 pounds lighter than stock, with the optimized center of gravity and weight distribution of a mid-engine placement. That's what the Factory Five GTM is in a build-it-yourself package."

Factory Five began the GTM's design process in 2002, starting with Smith's vision and progressing to CAD drawings, clay models, prototypes, and finally test cars. Along the way, it bought three Corvettes: a wrecked '99 coupe, from which it extracted the engine, fuel tank, full front suspension and brakes, rear control arms and brakes, steering column and rack, and a few miscellaneous pieces; an '02 Z06, which donated its engine to the cause; and a brand-new (at the time) '07 3LT-trimmed coupe, which was used to benchmark the final product. By 2007, pilot-line "beta" cars were rolling off of the assembly line, and the word on the street was that the GTM had the heart and soul of the Corvette-and its attitude, too.

Before full-scale production began, Factory Five enlisted the expert advice of General Manager Ken Thom and Chief Instructor Mike McGovern of the Bondurant Racing School in Chandler, Arizona. "The Bondurant School knows Corvettes," Smith explains. "It keeps the cars on the track, day in and day out, in challenging conditions. It put an LS6- and an LS7-powered GTM through two weeks of rigorous track testing, which allowed us to collect a wealth of data for chassis setup and wheel/tire selection. Based upon the testing results, we increased chassis rigidity, added power steering, evaluated sway bars, optimized tire sizes, and fine-tuned cockpit visibility and comfort, all before we began earnest production."

For its first magazine test, which appeared in Car and Driver, a pilot-line LS7 GTM clocked 0-60 times in 3.0-seconds, the quarter-mile in 11.0 seconds at 132 mph, and 1.05g of lateral force on street DOT-approved tires, as measured on C&D's 300-foot skidpad.

Production went into full swing in 2008, and as of May 2010, 350 GTMs have been sold, mostly to Chevrolet hobbyists and domestic custom-car builders. As validation of its success, the GTM won the Best Domestic award from Sony PlayStation at the 2007 SEMA Show.

Keith Bentzel, a mechanical contractor in Port Richey, Florida, is a proud owner of a GTM, which he built himself. "I fell in love with the styling of the car the first time I saw it," he says. "In 2008 I took the plunge, and I'm glad I did."

For a $19,990 base price, Factory Five supplied Bentzel with most everything he needed to build his own GTM. The backbone of the package is a computer-designed, ultra-rigid space frame made from precision-laser-cut, high-strength, mild-carbon steel and incorporating an integral six-point rollcage with roof-contoured bars (for additional headroom in the cockpit). The hand-laid, laminate composite body panels are made with vinylester resin and black gelcoat, and include a hinged-and-lined rear hatch, doors, and a nose. More than 80 CNC-cut, pre-formed, 6061-series-aluminum panels form the cockpit, the trunk, the radiator surround, the engine bay, and the nose/splash guards.

According to Factory Five, "The GTM Supercar kit is engineered to be built as a chassis kit by a car guy at home with regular tools. [We] give you everything you need to build your car, except for select running-gear parts taken from a '97-'04 C5 Corvette. The major Corvette parts include the engine, front and rear control arms, suspension/brakes, and fuel tanks. The only exception is the transaxle, which is a '90-'98 Porsche 911 G50 unit."

Bentzel ordered his GTM kit in April 2008. Since the delivery estimate was six weeks, it allowed him the time he needed to find a suitable C5 donor car. (GTM says that customers can also get the majority of the Corvette parts they need for the build new from GM Performance Parts.)

"After searching locally without success, I started looking on eBay," Bentzel confides. "About three weeks into my search, I found an interesting prospect in Alabama. It was an '02 that ended its life upside down in a hay field and was later sold at an insurance auction to a salvage yard. [The salvage yard] removed all the usable body parts, interior, and so on until it was down to a rolling/running chassis. Since I wouldn't need much more than that, it was an almost-perfect donor. I won the auction and had the chassis shipped to my home. When it showed up on a full-sized car hauler, my suspicious neighbors knew I was up to something."

Bentzel pulled the 350hp LS1 from the donor, disassembled its chassis, sold the torque tube and transmission, and scrapped the rest of the parts.

On June 6, 2008, the GTM kit arrived in a semi truck. In addition to the chassis and the five-piece body, there were 18 cardboard boxes packed with everything else Factory Five provides and a 2 1/2-inch thick, 600-page assembly manual.

The next day, Bentzel began the project. "Things start to go together rather quickly," he recalls. "In just a few days, I had the Corvette suspension pieces mounted, the calipers and rotors assembled, and the coilovers installed. Then came the dozens of aluminum close-off panels that needed to be drilled and mounted with hundreds of pop rivets. My forearms started to look like Popeye's," he says.

He then moved on to the pedal assembly, the Corvette's drive-by-wire throttle, the brake and clutch lines, the wiring, the engine-cooling system, the A/C, the fuel tanks and lines, and even more riveting.

The drivetrain installation was next. "Mating the LS1 to the Porsche transaxle was easy with the supplied adapter plate and custom flywheel," Bentzel says. "By October, I was ready for the ceremonial first turn of the key. I put a little fuel in the tanks, engaged the ignition, and the GTM fired up for a second, but that was it. After some head scratching, I figured out the assembly manual had a wiring error on the ignition-circuit wiring. I corrected that, and the GTM roared to life. I drove it around the block a few times in the "go-kart" stage [with no body], just to check things out and to give the neighbors something new to talk about. Confident that my work was a success, I loosely mated the main cockpit body, hood, both doors, and rear hatch onto the chassis, and it was off to the body shop.

"Spraycraft Unlimited in New Port Richey takes credit for this GTM's gorgeous Burnt Fire paint. A couple of years earlier, they repainted my '48 Anglia with House of Kolors Kandy paints, and I loved how it turned out. That's why I wanted to paint the GTM in an HOK Tangerine Kandy. The painter said to me, 'With all the sexy curves on this car, it would look spectacular with ChromaLusion multi-effect paint by DuPont.' Well, before I knew it, he had me sold on the idea, and I had picked out the new color. I really think I made a great choice."

After bringing the coruscating GTM home, Bentzel carried out the closing stages of its construction. He installed an ISIS intelligent multiplex system, a computerized wiring harness that allowed him to add a wide palette of electrical accessories and options, including pushbutton start, security, auxiliary fan control, and more. He also added a Nordskog six-gauge digital dash to the cabin. On the exterior he trimmed the composite body with aluminum hood, side-scoop, and rear-hatch louvers from Vraptor Speed-works. A homebuilt rear wing and custom-made front and rear grilles round out the presentation.

The GTM kit comes standard with a full interior package, including sport seats, carpeting, suede headliner and rollcage covers, covered interior panels, door panels, an engine cover, a rear bulkhead, a carbon-faced dash assembly, Auto Meter gauges, and directional vents for heating and cooling. Bentzel was impressed with the package, but he wanted to give the car a custom touch. "I had AAA Tops and Auto Upholstery in New Port Richey re-stitch most of the interior panels, the seat inserts, and the dash pods. I changed the headliner and made a custom overhead panel to hide the rollcage and the A-pillar supports. After the modifications, I installed the interior myself."

Bentzel titled and tagged the GTM on June 16, 2009, and has since put 3,500 miles on the Corvette-powered supercar. "It turns heads everywhere it goes," he says. "Seeing a camera phone stuck out a car window at intersections is the norm. I've seen two people literally drive off the road because they were paying more attention to my GTM than to their driving.

"The GTM is a blast to drive," he concludes. "The LS1 in a 2,400-pound car makes for some impressive acceleration. It handles like a go-kart in the turns, and the top speed is 150 mph. In the past I've always been a Ford guy, but the Corvette drivetrain and components on the GTM have really turned me into a Vette fanatic. I'm now sold on the brand, and eventually I plan on putting a new Corvette convertible in my driveway."

Smith concurs. "The GTM has received an overwhelmingly enthusiastic response in the Corvette community. The car is a true glimpse at how far GM engineering can go in a lighter-weight package. Though I'd love to see Chevrolet incorporate our mid-engine design, improved chassis, and performance advantages into future generations of the Corvette, I think they've left it for us to explore this direction, and that the Corvette will remain what it is today, a front-engine, V-8 American supercar.

"I have so much admiration for GM's Corvette program and the men and women who put it together. The GTM is lucky to be able to use the Corvette as the substrate for its design work, because the Vette is pound-for-pound on par or better than any exotic supercar on the planet. Like the Corvette, our GTM is appropriately seen as a testament to the great cars and engineering that are being made in America today."