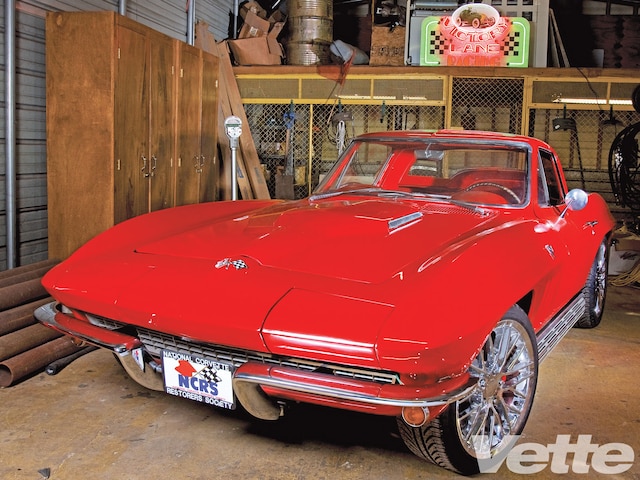 What if we let you in on the inside story of a red-on-red, previous NCRS winner '66 Corvette coupe that's now stuffed with 572 cubic inches of pure GM big-block power?

"I bought my '66 Corvette to go fast, but I was disappointed in its performance," Leroy Gonzalez, a shopping-center developer in Seffner, Florida, tells VETTE. "That's why it's now powered by a GM Performance Parts 572/620hp big-block."

To transform his mediocre-mill midyear into a maniacally meteoric missile, Gonzalez put out a call to AntiVenom, a Corvette performance shop also in Seffner. "Leroy came to me and didn't know what he wanted to do with his Corvette," Greg Lovell, the shop's owner explains. "I offered to transplant a 505hp LS7 into the car, but he thought it wasn't impressive enough. He said that it had already been done many times in the hobby; instead he wanted something brutal, flashy, and intimidating."

After doing his research, Lovell decided the most impressive, yet streetable, crate engine offered by GM was the Deluxe 572/620. "When I saw it described in the GM Performance Parts (GMPP) catalog as 'the coolest collection of orange, chrome, and aluminum you've ever seen,' I knew it was the right motor for this Vette. The 620 hp and 650 lb-ft of torque sure didn't hurt our decision either," he says.

Dr. Jamie Meyer, GM Performance Parts Marketing Manager, agrees. "This is flat-out the baddest street Rat available that still happily runs on pump gas. Everything was designed to offer you the ultimate big-block experience. That's why we've given it the title 'King of the Street.'"

To propel the transformation, Lovell removed the Corvette's original, numbers-matching 327/300 and bagged it for safekeeping. Then, confronted with the task of making the 572, its engine accessories, and the requisite cooling and braking hardware all fit within the close spaces of the Corvette's engine bay, he got to work.

"Physically, the 572 will bolt right into place in a midyear Corvette," Lovell says. "However, the factory-supplied oil pan comes extremely close to the ground; I swapped it out for a Milodon unit."

There were other challenges, too. "There was no room left for a GM power-steering reservoir or vacuum-assist power brakes. I had to hunt for a junkyard-jewel reservoir that would fit, and extracted one from a Lexus. A Hydroboost system met our space requirements, but just barely," he laughs. "In addition, I couldn't locate any off-the-shelf headers to mate up to the 572. Luckily, I was able to modify a set of Stainless Works '63-'82 big-block headers for clearance around the steering box."

Though this Vette's owner could have chosen the look of a traditional V-belt accessory-drive system for the project, he felt a Billet Specialties True-Trac Serpentine System was better qualified for the job, and its polished looks gave the engine the flashy appearance he wanted. The kit included a 105-amp Powermaster alternator, an Edelbrock reverse-rotation water pump, a Sanden SD7 A/C compressor, Billet Specialties' patented A/C manifold, a Mavel power-steering pump, a billet-aluminum tensioner, a Goodyear Gatorback belt, and all the pulleys, covers, and stainless-steel hardware needed for installation.

Other mods include a Be Cool aluminum radiator, a modified Barry Grant thermostat housing to give the radiator hose a stock-looking routing, twin 12-inch Be Cool fans, and an MSD tall-deck tach-drive distributor and 6AL ignition box.

Though most people would be content with running the 572 with its factory four-barrel, Leroy had a very special request concerning carburetion. "He told me he had a passion for Tri-powers, and he just wouldn't be truly happy without three carbs instead of one," Lovell says.

Hence, AntiVenom installed a Barry Grant (BG) Six-Shooter system, consisting of an aluminum, dual-plane Triple-D Induction intake, three 250-cfm Demon two-barrel carbs, and a progressive linkage, which allows it to cruise comfortably on the center two-barrel, then become a fire-breathing behemoth when the secondary carbs are engaged. According to the company, "Compared to a BG Speed Demon 850, the Six-Shooter was good for about 39 hp and 22 lb-ft of torque more on a GM Performance Parts 502 engine, according to our tests."

Delivering the 572's massive power through the rest of the drivetrain was the next stage of this Vette's epic evolution. Concerned that the car's original two-speed Powerglide transmission would shatter under the merciless torque loads presented to it, Gonzalez suggested a Tremec TKO-600 five-speed manual-trans changeover.

The rearend remains stock with 3.55 factory gears, but the suspension received performance upgrades as needed. AntiVenom retired the stock front coils and rear transverse spring and replaced them with Vette Brakes & Products front and rear transverse leaf springs and rear offset control arms. Other than that, the ride and handling remain stock, with factory-style shocks at all four corners and a factory 7/8-inch sway bar in the front.

Braking, as expected, has been modernized to rein in the 572's potent personality; relying upon the factory's original four-wheel disc system would have been a losing proposition at each push of the pedal. Accordingly, Lovell modified the Vette's factory front and rear spindles to accommodate a set of bolt-on C6 Z06 brakes.

Upon completion, Lovell had the honor of being the first person to drive the vicious, Viper-vivisecting Vette. "I tested it on a rainy day, so I had to gingerly apply throttle pressure and be very light on gear shifts. I've taken it out on dry days and blown the tires off in Third gear. At wide-open throttle, from 2,500 rpm up to a 6,000-rpm redline, the rear of the Corvette is enveloped in a huge cloud of rubber smoke until you let off of the gas-not that I ever do," he says.

Surprisingly, Lovell's favorite feature on this virile Vette is not its towering power, but its passionate sound. "The intense reverberation of the engine when the throttle activates the Six-Shooter's secondaries is awe-inspiring. It sounds like the carburetors are going to suck the hood in and expel it violently out the side pipes," he says.

Gonzalez, however, hasn't had many opportunities to enjoy his Vette yet. "He wants to find some time off just for him and the car, but until then, I'll just have to tell him how much fun it is to drive," Lovell says.

So are 572 cubic inches enough for this milestone-generation Corvette?

"There's no replacement for displacement," Lovell laughs. "Five hundred seventy-two cubes are just right . . . for now. As soon as GM comes out with a 632-cube big-block, you'll have to ask me the question again."