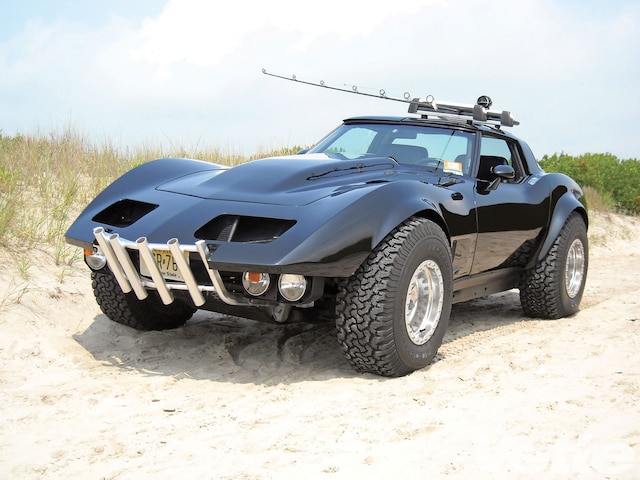 When you live close to the shore, like I do, it's not uncommon to see four-wheel-drive vehicles with surf-fishing racks on the front bumper. The formula is this: fishing racks + beach = 4WD vehicle, usually a truck. That's what threw me when I first saw Dewey Powell's menacingly cool-looking '81-bodied Corvette at the Strictly Corvettes Show in Atlantic City, New Jersey.

The first thing I noticed was the stylized fishing-pole rack and the way it was angled back from the middle to match the car's pointed nose. Then the tall tires and L88 wheel flares got me. "Wow," I thought, "What's this?" And that was before I looked under the hood and saw a dual-quad 392 Hemi.

Powell was completely relaxed in a lawn chair, wearing jeans, black cowboy boots, a black T-shirt, and wrap-around shades. "That yours?" I asked.

"Yeah, that's right," he answered, "and I drove it here today. You should have seen it yesterday. It was covered with sand." I had just met Ocean City's local legend, Dewey Powell.

Powell is what you might call "Old School." You could also say that he truly has gasoline in his veins. As a small child, he helped out at his Dad's Esso gas station, which opened in 1912. By 1945, Powell was pumping gas and looking to go fast at the local eighth-mile dragstrip with his Model A pickup truck powered by a Chevy engine. Powell's uncle owned one of the most famous dirt tracks in South Jersey. Over the decades the track was named Powell Speedway, then Pleasantville Speedway, and finally, Atlantic City Speedway. Today, the old racetrack is long gone, but Powell is still powering around in one of several of his hand-made machines.

This was definitely a racing family, and Powell built all sorts of dirt track and drag cars. Dirt racers are unique in that they don't mind fixing cars that get slammed around. If something breaks, they fix it and get back on the track. They're also very good at mixing and matching parts from all kinds of cars in order to reach their objective.

Powell's 4WD Corvette comes from that kind of "garage engineering." The basic structure of the car is a '69 Corvette. When Powell bought the car in 1976, it had been set up for drag racing with a turbocharged LS6 454. Life can be hard for cars that reside along the shore, as the salt air eats them alive. The original body was completely shot, but it just happened that a friend had a body from an '81 Corvette for the right price. Being a career mechanic and having access to lots of parts, Powell started another of his car projects.

With the car completely stripped and a new body waiting, Powell set about building his 4WD Corvette. The C3 rides on a short, 98-inch wheelbase. Since the front-wheel-drive unit was coming out of a Cadillac Eldorado, and a transfer cast was to be mounted behind the transmission, Powell needed an engine that was shorter than a big-block Chevy. Powell had raced Hemis before and thought, "Why not?"

The 392 Hemi is out of a '58 Chrysler New Yorker. We tend to forget just how much cast-iron was in those old Hemis. With a Turbo 400 and a 1,800rpm-stall torque converter, Powell's engine, trans, and 4WD transfer case weighs around 1,000 pounds. The 392 Hemi has 10.5:1 compression and uses a 0.490-lift hydraulic cam operating stainless steel valves. The aluminum intake manifold is the only substantial part on this engine that's not cast-iron. The current two Edelbrock carbs will soon be replaced with two 600 Holleys.

Powering the front wheels is a very interesting collection of parts. The front-wheel-drive unit is from a '70s Cadillac Eldorado and includes the frame, front suspension, spindles, brakes, and steering box. Each front axle was custom made. The Jeep transfer case is mounted behind the transmission, with a one-piece driveshaft running to the rear and a two-piece shaft running to the front differential. The front suspension uses coilover shocks. Powell used the power-steering unit from an Eldorado, but he didn't feel power brakes were necessary. The rear suspension is the stock setup, with stock-car heavy-duty shocks and a factory mono fiberglass spring.

With all this unusual hardware under the hood, the original firewall had to go. The 392 Hemi is 4 inches wider and slightly shorter than a big-block Chevy, plus the engine had to be set back 3 inches to make room for the front clip and radiator. Powell determined that it was just as easy (and cleaner) to make a new firewall out of 0.040-gauge steel than it would have been to notch the factory firewall to clear the magneto. A stock-car aluminum radiator keeps the Hemi cool; the power-steering cooler resides just ahead of it. Powell uses 33x12x15-inch BFGoodrich Off Road T/A tires on 11x15-inch Ion bead-lock wheels.

With the chassis and engine completed, the '81 body needed some adjustments. The front fenders had to be opened up to accommodate the oversized tires. L88 road-racing flares were grafted onto the front and rear fenders. A domed hood was needed to provide clearance for the Hemi's dual quads. The headlight buckets that are officially "too low" are from a Chrysler Imperial. Front bumper? What front bumper? The surf-fishing rack is good enough for warding off shopping carts and bicyclists.

The back end throws you a little. The original '81 rear bumper cover was shot, and besides, Powell liked the look of the '73-'79 cover. The only clues that this is an '81 body are the '80-'82-style front-fender vents. The rear taillights are LED units. Since this is a daily driver and beach machine, the roof rack is a permanent part of Powell's setup. When you live at the shore, you catch fish whenever you can. With eight coats of Imron black paint and no badges or graphics, the car looks surprisingly clean for such a heavily customized ride.

The interior provides more evidence of the car's daily driven nature. At first glance, the cabin looks fairly stock. But like any good dirt-track racer, Powell just had to have some tinwork in the interior. Flat racing gauges mounted on sheetmetal replace the stock speedometer and tachometer. The dash center section, meanwhile, features oil-pressure, water-temperature, amp-meter, and fuel-level gauges affixed to sheet steel. The console top is sheetmetal with toggle switches that control windshield squirters, wipers, supplementary fuel pump, main fan, power windows, heat, and A/C. The extra shifter to the right of the center console is an odd sight in a Corvette; it actuates the 4WD system.

Ocean City can be like the tropics in the summer and the arctic in the winter. Since Powell drives the car all year round, he installed a hot-rod HVAC unit under the dash. And since power comes from a 392 Hemi out of a '58 Chrysler Imperial, Powell dressed up the horn button with the Imperial bird emblem.

Powell's other passion is surf fishing, so he built his Corvette to be able to easily navigate the soft, fine, white sand of the Jersey Shore. From October to May vehicles are permitted on the beach. The sand along the Shore is so fine and deep that 4WD SUVs often get stuck. Powell regularly pulls cars and trucks to safety in the Vette. "You should see the look on their faces when I come up the beach in this thing," he says. "First, they hear me-it sounds like a big truck, then this black Corvette comes around the bend. The car is stout and can be run very hard."

Powell has owned his 4WD Corvette for more than 33 years and has more than 190,000 miles on it. His next project will involve making a special bracket to mount a winch on the rear crossmember. To access the winch, the license plate will flop down, just like an old gas filler-cap door.

So if you're out on the beach in Ocean City, and you get stuck in the sand, look for a high-riding black Corvette. After all, Powell is always looking for an excuse to kick up a little sand.