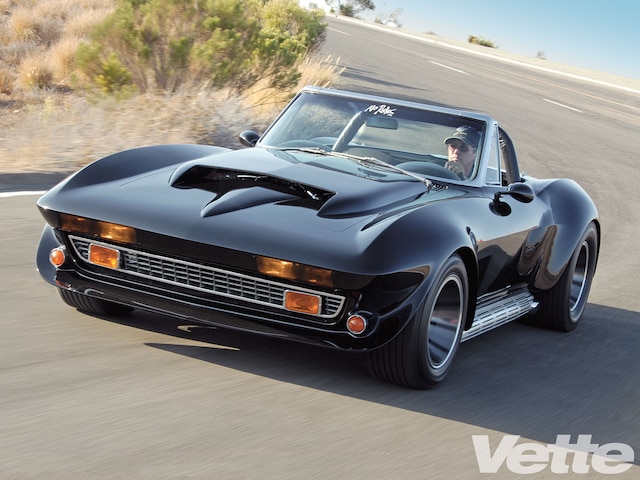 We've always been a big fan of baseball great Yogi Berra's fractured comments, such as "A nickel ain't worth a dime anymore," and "He hits from both sides of the plate-he's amphibious."

Ironically, a couple of his oddball Yogi-isms actually made sense, in a weird way, like the one about the driveway to his house: "When you come to a fork in the road, take it." Due to its circular configuration, either direction would lead you to the front door, so it was technically a correct statement. And so is his classic, "It's like déjà vu all over again," at least in reference to Don Park's '67 Sting Ray.

Not only have we shot the car more than twice, but the turbos are a dual setup, and the engine has a second form of forced induction: nitrous. Yeah, we know it all sounds like the "department of redundancy department," so it's pretty familiar territory-all over again.

As noted in our initial feature back in the mid-'90s, this car was originally intended for slalom racing, but after Don's Speed Shop in San Diego started breathing heavily on the 355ci V-8 with some Banks turbos, power shot up to 700 horses, enough to gallop through the quarter in the 10s at 135 mph. Pretty heady stuff for a '60s Corvette updated with a more modern mill, but as Yogi used to quip, "The future ain't what it used to be."

"You can observe a lot just by watching."

Just take a close look at all the performance parts. The mill was actually a four-bolt truck block, fitted with O-ring seals and studs to handle increased pressure from the pair of puffers. These twin Rayjay/GBE units have water-injection nozzles on each compressor inlet. After the exhaust spins the pinwheels, it exits the turbo-discharge port into a low-restriction, chromed exhaust/silencer system integrated with the original Corvette side-exhaust covers

Then the highly augmented intake airflow runs through a modified 800-cfm Holley marine carb, which sits on NOS spray bars and is fed by dual pumps to prevent lean-out. Gulping and expelling the air/fuel mixture are large-valve Chevy heads (2.02-inch intake and 1.60-inch exhaust) that were ported, polished, and cc'd. The turbo bumpstick is a 284/294-degree, 0.480-inch-lift Crower component with variable-duration Rhodes hydraulic lifters. Crower also supplied the pushrods and stainless steel roller rocker arms.

Squishing the mix are JE reverse-dome blower pistons with ceramic plasma top rings and a 7.5:1 compression ratio. Beefing up the bottom end are "pink" forged connecting rods that run through a forged crankshaft.

Backing up this over-achieving SBC is a Turbo-400 slushbox, heavily modified to funnel the flood of power. Art Carr built the 3,000-rpm stall converter, a 10-inch blower-motor/nitrous-oxide unit. For additional reinforcement, the third member houses a Moroso "Brute Strength" clutch-type diff with a 4.11 ratio. Gussets and extra welding strengthen the frame, which is suspended by Guldstrand components.

"We have deep depth."

Why go to so much effort on forced induction, when a big-block might be way simpler? Well, just ask Gale Banks. He's no Yogi Berra (thankfully), but does have his own choice expressions about turbocharging. Here's his in-depth take on the subject:

"Putting it simply, in terms of performance, a good twin-turbo 350 V-8 will turn your engine inside out," Banks points out. "Bigger engines add power, but turbocharging bigger engines really gets the job done."

Is that deep or what? After all, Banks has long been known for a wide range of performance upgrades, everything from muscle cars to 220mph pickups fitted with diesel (yes, diesel) engines.

"If I didn't wake up, I'd still be sleeping"

"With me, it's always about power," he adds. "We've been able to pick up 200 hp more with the turbos over a Roots-type blower." And it's streetable, durable power, since Banks insists on rigorous testing on all of his company's performance upgrades.

"For the twin-turbo program, we had one engine called 'the mule,'" notes a Banks engine technician. "That's because we kicked the livin' crap out of it." Since this setup is a whole 'nother animal from most Corvette mills, we decided to dig even deeper into the Banks approach.

For instance, hot rodders are fond of saying, "There's no replacement for displacement." True, but what sort of cubes are we talking about? Is it the cubic inches of the engine that count, or the cubic inches of air in the combustion chamber? As Banks points out, it's definitely the latter.

"The towels were so thick there, I could hardly close my suitcase."

Turbocharging does this for two reasons: first, the internal friction of the engine remains largely the same regardless of boost, so almost all of the extra power from the turbo(s) is available to power the vehicle. Second, the boost in the induction system actually helps push the pistons down on the intake stroke.

In contrast, on a normally aspirated engine, that intake stroke creates a pumping loss (that is, negative torque). Gearheads might counter by pointing out that turbochargers create exhaust backpressure, increasing the pumping loss on the exhaust stroke. But this is not the case if the system is carefully engineered with only a minor exhaust restriction for the dual turbos, so that boost pressure always exceeds exhaust-system backpressure.

Mrs. Lindsay: "You certainly look cool."
Yogi Berra: "Thanks, you don't look so hot yourself."

Well, both are true in the case of Park's heavily customized Sting Ray. The body mods are really chilling, but the super-wide hoodscoop, front spoiler, fender flares, and recontoured tail were a one-off deal done by local guys, and the molds are long gone.

"So that's not so hot if something happens to the car," Park admits. As for that blistering mill, "The twin-turbo motor runs pretty cool otherwise, but it needs a big-block starter, due to the heat coming off the headers."

All of which could be summed up with: "It ain't the heat, it's the humility." Translation: You can force lesser muscle cars to humble themselves, realizing they've been out-gunned by a small-block. You'd think those lines alone are pretty menacing, and would ward off any wannabes-or maybe not.

One time Park went to a cruise night in San Diego, and a slant-nose turbo Porsche 911 began to bait him as he headed back home. A crowd of onlookers followed to monitor the impending action. By the time this little parade of rodders entered a freeway on-ramp, Park had tired of the game, so he dialed up the boost knob and got on it, leaving the Porsche choking on his dual-turbo dust.

When he came across this same Porsche-phile later on, the 911 pilot indignantly asked what was underhood. "Oh, just a small-block Chevy," was Park's initial reply. After letting the guy squirm and cuss a bit, Park finally let on about the turbos and nitrous.

"The only color I don't have is navy brown."

Well, to borrow some choice phrasing from Henry Ford as well, you can have any color you want on this Sting Ray, as long as it's black. And in this case, layers and layers of it, as in multiple coats of Ditzler black lacquer.

As for the interior, it's fitted with snug Corbeau buckets and five-point Simpson belts. A slew of engine instruments keep track of the heart-pounding engine vitals. So just how much speed are we talking about here?

"I wish I had an answer to that because I'm tired of answering that question."

That's what everybody wants to know, but Park says he's only done that one run down the quarter, mentioned at the outset. So onlookers will likely have to be content with one final quote from Yogi Berra:

"The only reason I need these gloves is 'cause of my hands."

And what's the reason for a twin-turbo Corvette? For stomping your right foot, of course.