The Real Story Behind An Unlikely Icon 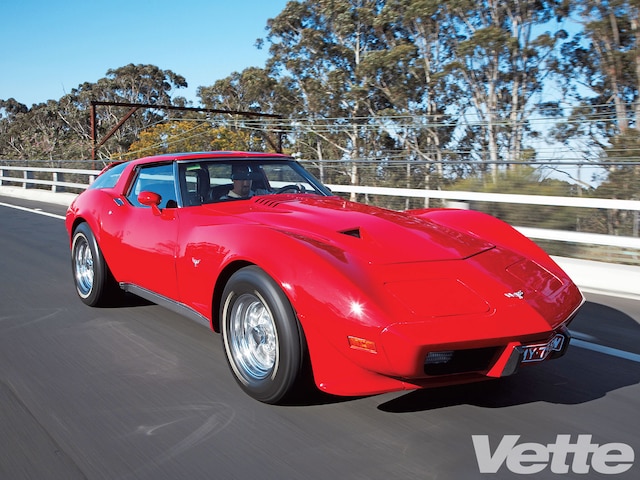 IF YOU'RE OLD ENOUGH to recall the heyday of the C3, it's likely you also remember the Corvette Sportwagon. Originally designed by Chuck Miller (and later adapted to the rubber-bumper '74-'82 Corvettes by John Greenwood), the Sportwagon and Sportwagon body kits were marketed through such companies as American Custom Industries (ACI) and Eckler's, and they allowed owners of C3s to convert their coupe or convertible Vettes into cargo-compatible wagons.

As the story goes, Miller was commissioned to create the first Sportwagon by a rock-band drummer, who needed some extra cargo room for his skins. There were some inherent problems with the first design, however. Because there was no functional hatch, cargo had to undergo a difficult ingress-and-egress process through the side doors. And aesthetically, the original Sportwagon looked awkward. It just didn't blend together well.

Greenwood's Prototype
In 1976, John Greenwood thought he could do the Corvette wagon one better. According to Mike Guyette of Greenwood Registry (www.greenwoodregistry.com), "Greenwood went to it with a clean sheet of paper. His prototype proved to be an immense improvement [over the Miller design], not only functionally, but aesthetically as well. The roofline was continued at the same slope and curvature as the T-tops, ending shorter and lower than the original. The slant of the rear coincided nicely with the angle of the bumper. The side 'glass' was extended up into the roof and was made from formed Plexiglas. Flush mounted, these windows were glued into place with no molding-aerodynamic cues taken from [Greenwood's] race-car experience that would become mandatory in future body designs. The biggest improvement, however, was the rear-opening 'hatch' that allowed access from the back of the car."

Norm Bogiel, one of Greenwood's employees, is credited with the development work on the Sportwagon. "The roof itself was copied from [Miller's design]," Bogiel recalls. "His roof didn't have windows on the side or rear, though. For the rear, Charlie Selix and I took a Pinto glass and cut it down. We molded it into the roof and then cut out what would be the hatch. We used the Pinto hinges and struts on the prototype and a solenoid release. I also built special speaker caves into the interior posts and did a few other little innovations."

The prototype was built on Greenwood's then-girlfriend's Sharon Vaden's street car. "It was originally white, but we painted it a brown metallic," Bogiel continued. "We put it in the back of a rental truck and sent it off to the SEMA show [Anaheim, California, 1976]. It was a huge hit and John came back with a number of orders."

From the onset, Greenwood was unhappy with the Sportwagon's hatch and was adamant that it be reengineered. "He was undaunted in his quest to build the ultimate hauler, so his brother Burt came up with an idea to remedy the hatch problem," Guyette explains. "He managed to eliminate the troublesome fiberglass surround, and used instead a flat, tempered piece of glass with holes drilled to accommodate the hinges and latch. A rubber weatherstripping encompassed the opening, ensuring that no water could enter. The glass was supported by two gas struts that held it open at any angle. Access through the rear glass was via a solenoid electrically activated from the driver's inside B-pillar. An airfoil was located on the roof where it managed airflow and kept the glass somewhat clean."

By the late 1970s, Greenwood had decided that the Sportwagon's less-than-bombastic brown hue was not superlative enough for the show circuit, so he repainted it Ferrari Red. There were some engineering and decor changes, too. "A reinforced, flat rear floor necessitated the removal of the gas tank," Guyette explains. "A custom-made, rubber-lined 22-gallon fuel cell replaced the spare tire, while a space-saver spare tire took up little room in the cavernous cargo area. Custom fiberglass trim pieces were made to finish off the interior, and black cutpile carpeting was installed to match the original style. The heavier loads that the Sportwagon might accommodate required that Greenwood install a set of JacPac air shocks in the rear, with adjustments made via a remote knob on the dash."

"The stock hood was replaced with one of Greenwood's new designs," Guyette continues. "It was a radical-looking hood that featured five heat-exhausting slots at the rear and a non-functioning NACA duct on the passenger side. [This hood would later be used on the Turbo GT cars.] He also installed 8-inch Dayton knockoff wire wheels shod with BFG Radial T/A tires, new emblems, leather seat covers, and, when they became available in 1977, sport mirrors.

For all its considerable "wow" factor, the Sportwagon's driveline and interior remained basically stock. The L48 350 and Turbo 350 were left untouched, but the smog system was removed. In addition, "a custom dual-exhaust system was fabricated to allow the pipes to bend around the fuel cell, which was slightly larger than the spare-tire carrier it replaced," Guyette says.

Public Demand
In 1977 or 1978, Greenwood made molds from his prototype Sportwagon. "With Greenwood World Headquarters occupying a part of American Custom Industries, a few Sportwagons were built on site," Guyette confirms. "Then, when Greenwood moved from Ohio to Florida in 1979, he became partners with Eckler's, and began selling kits over the counter for DIY enthusiasts. The fuel-cell arrangement was replaced with a stock gas tank, which infringed on the cargo area somewhat. As did ACI, Eckler's also built a few cars at its facility. It is estimated that, in total, approximately two dozen ACI, Eckler's, and over-the-counter kit Greenwood Sportwagons were produced, including a few Turbo Sportwagons!"

The Restoration
In 1990, Guyette wrote a letter to Greenwood and asked how many Sportwagons were built. Greenwood responded that he only built one prototype in his shop, and coincidentally, it just happened to be for sale. In September, Guyette flew to Florida and visited the Sportwagon at Greenwood's garage in Lake Mary. He fell in love with it, bought it, and drove it 1,500 miles back to his home.

"The Sportwagon was in really good shape, but I decided to do a frame-off restoration," he remembers. "[I intended to do] a proper paintjob, so the body was removed from the frame. The frame was then completely dismantled and sandblasted. Every spot weld was completely rewelded and ground smooth. Then the frame was primed, painted gloss black, and clearcoated."

Exterior
"The car was stripped and repainted BMW Cinnabar Red basecoat/clearcoat [the color the Sportwagon had been repainted in the '80s by Greenwood]," Guyette says. "A three-piece '78 Pace Car front spoiler and NOS Moonroofs glass roof panels were installed. The Turbo hood was retained, and the wheels were replaced with new Dayton tubeless, knock-off wire wheels wrapped in 255/60SR15 BFG Radial T/A rubber at all four corners."

Interior
"The carpets were completely replaced with new cutpile," he continues. "The seats were freshened with new foam and leather seat covers. The '70s-era stereo was replaced with an AM/FM/cassette, and the dash and kick-panel speakers were replaced. A new windshield, door glass, and weatherstripping were installed. The clock was replaced with a quartz unit, and the steering wheel was upgraded to a three-spoke Momo Competition with a thickly padded, perforated leather rim."

Brakes, Fuel, Suspension, Steering
The Vette's original brakes were jettisoned in favor of stainless-sleeved O-ring units, and all the fuel and brake lines were swapped out for stainless replacements. Even the parking brake was upgraded with stainless components. Although not part of the initial restoration, the original custom-made fuel cell was eventually replaced with a new one that incorporated a special foam material that eliminated fuel slosh.

Show, Then Go
Guyette displayed the Sportwagon at Corvettes at Carlisle in 1995 and was awarded the Chip's Choice award. Three years later, it returned to the annual event for the Racers' Reunion. John Greenwood was present, signed the console, and reminisced about his days driving the Sportwagon. In 2004, it returned to Carlisle again, this time for the Greenwood Corvettes Reunion, coordinated by Guyette.

In 2008, Andrew Angus, a welder from Lawson, New South Wales, Australia, traveled to Corvettes at Carlisle on his family's summer vacation. He explains what happened next: "When I went to Carlisle, I had in mind to purchase an older car or wagon kit, have it shipped back to Australia, and work on it. As my wife and I were walking around the showground, I noticed a wagon and started talking to the owner. I explained that I had always been interested in the concept of a Corvette wagon.

"He explained to me that he knew someone at the show who had a wagon for sale, and he introduced me to Mike Guyette," Angus continues. "Mike talked about his car and suggested I look at the web page on which it was advertised. Then, if I was still interested, I should contact him."

It was then that Angus realized that fate had brought him to the Greenwood Sportwagon. "I had a look at the website and realized it was the car I had dreamed of," he says. "I couldn't believe it at first. We discussed price by email, along with how to ship the vehicle to Australia. Having met Mike, I developed the confidence to continue with negotiations and to go through with the transaction . . . and I wasn't disappointed. The Sportwagon arrived in Australia in excellent condition, just as he had described it. He also included numerous trophies it had won, many magazines that had featured it, and lots of documentation."

Conclusion
Since its arrival "down under," Greenwood's Sportwagon has been featured in Australia's Unique Cars magazine. It has also appeared in a number of club car shows and won awards at show-and-shines. Most recently it was selected to be on display at the first V-8 Supercars event at Homebush Bay, near Sydney.

"I fell in love with the Sportwagon concept, having seen a few articles in various Corvette magazines back in the '80s," Guyette says. [A Sportwagon was on the cover of our sister publication Corvette Fever in July 1980.] "The early shark-era Vettes weren't known for their exceptional baggage capacity, and what little you could fit had to go in behind the forward-folding seats. The original-design Corvette Sportwagon addressed the capacity issue, but access was still via the cockpit, as the rear window was fixed in place. The Greenwood Sportwagon made cargo stowage a breeze with the lift-up rear window glass, and the new design with the wrap-up side windows really fit the C3 rubber-bumper cars perfectly.

"Although I'd received a few comments criticizing the look of the Sportwagon-from the purists, of course-I also received many more positive responses from both Vette enthusiasts and the hot-rod and custom community. My years as caretaker of this unique automobile were full of memorable events and friendly encounters. I'm glad to see that it's now turning heads on another continent. Vette on, Andrew!"

VETTE would like to thank Mike Guyette for helping to make this story possible.